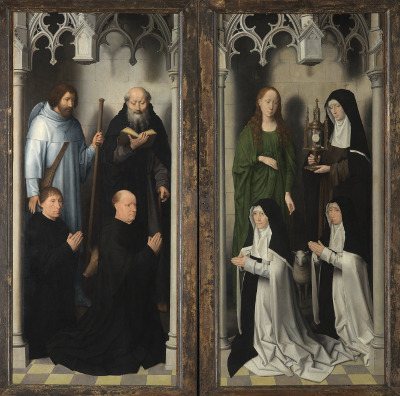 In this altarpiece, donors kneel at the feet of their patron saints.

Now seemingly ubiquitous in Western art, stand-alone portraits were in fact incredibly rare during the medieval period. Although wealthy individuals were sometimes depicted as worshippers in religious paintings [see left], they were rarely the main subjects of a work of art. This all changed during the early Renaissance, when a newfound interest in the individual and a desire to reclaim the portrait styles of antiquity encouraged the rise of the genre of Renaissance portraiture.

Early modern people placed great weight on physical appearance and believed that the character of an individual could be read from their facial features. Hooked noses, for example, might convey a hawkish personality, while a high forehead was a sure sign of intelligence. Yet portraits conveyed much more than personality; they also used common tropes to indicate the sitter's wealth, education, or social status. Portraits were one means by which a wealthy or powerful individual might stage and display his or her own identity before a public audience. Within European courts, for example, portraits played an especially crucial diplomatic role. Kings might give their allies portraits of themselves as a impressive gesture of friendship, or request miniature portraits from potential suitors. 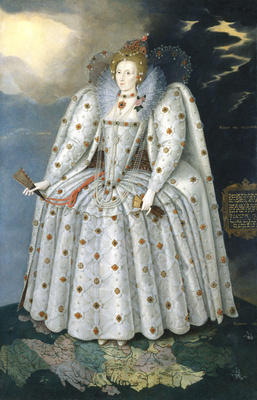 Queen Elizabeth I ('The Ditchley portrait')

Marcus Gheeraerts the Younger
oil on canvas, circa 1592
National Portrait Gallery, London; 2561
As economic conditions improved across Europe toward the end of the medieval period, some individuals were able to accumulate enough wealth to be able to purchase objects and clothing which enhanced their social prestige. Scholars like Steven Greenblatt have hypothesized that early modern individuals, more than their medieval counterparts, consciously used clothing, material objects, and other external indicators to develop an exterior, public persona. Nobility was no longer just a social status passed down by inheritance, but rather a state of superior style, manners, education, and grace that could be learned and performed in front of others. Castiglione’s popular Book of the Courtier (1528) was one of the first books to introduce this idea; the first manual of civility to appear during this era, it gave advice to would-be nobles on personal appearance and mannerisms. Early modern people, especially those in court circles, were aware that they could use material goods to shape, fashion and ultimately improve their identity in the eyes of other important people. Early modern portraits, within this cultural context, can thus be read as expressions of the public values of certain individuals and the classes to which they belong.

As you look through this collection, try to decipher the clues given by the artists about the wealth, social class, interests, and personality of the sitter. What types of objects and materials seem particularly significant? Does the position of the body within the portrait (profile, three-quarter, or frontal view; full-body, half-body, or bust) impact how you perceive the individual? Finally, where do you think these portraits may have been displayed, and for what purpose?

The Human Body, a survey