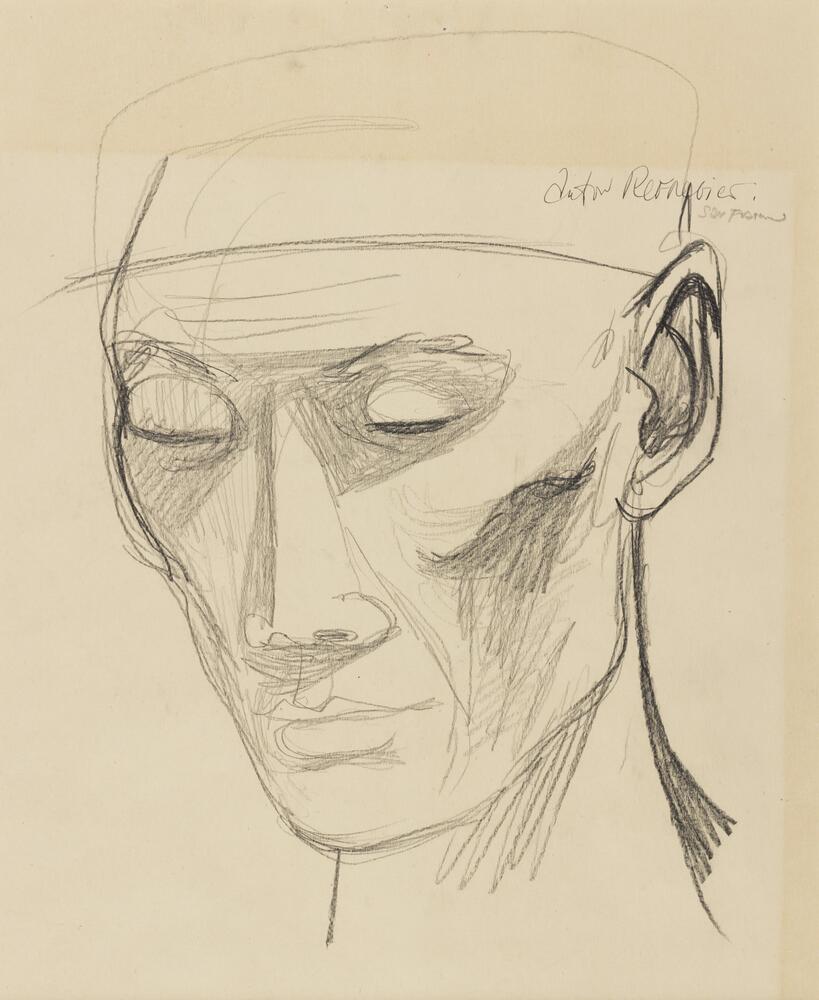 Anton Refregier's "Study of a Man's Head for History of California" comes from his mural at the Rincon Center in San Francisco, located at Mission and Spear, South of Market. Refregier was a Russian immigrant, painter and muralist who created art under the Works Progress Administration through the Federal Art Project. His realist paintings represent histories of racial tension and labor movements. Beginning in 1941 and over the course of several years, Refregier completed the 27 panels that make up History of California.

This study comes from panel #16, "Building the Railroad" that depicts the building of the Transcontinental Railroad. Beginning in 1863 in Sacramento, California, the Central Pacific Railroad Company built a railroad through the Sierra mountains to Promontory Point, Utah. "Building the Railroad" represents the railroad workers who constructed this major infrastructural feat, especially centering the Chinese. Hired as cheap labor, around 12,000 Chinese laborers were employed to build the railroad. Emphasizing their contributions, "Building the Railroad" brings attention to the predominance of Chinese labor in constructing the Transcontinental Railroad. 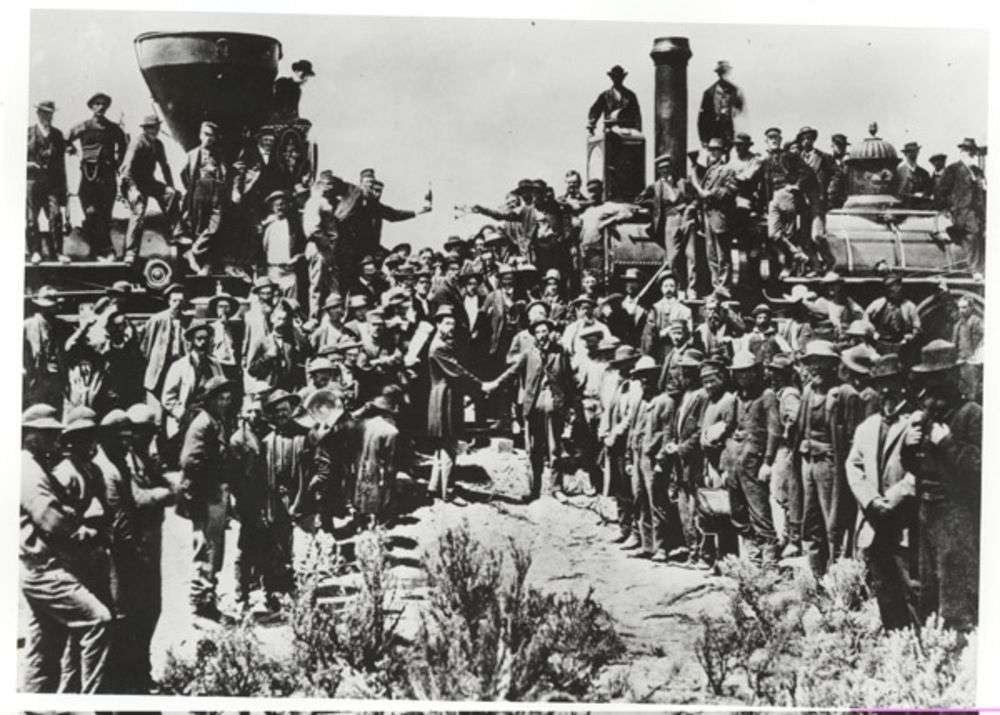 Refregier's History of California challenges dominant and often celebratory histories of the Transcontinental Railroad and its construction. When the railroad was completed in 1869, Central Pacific Railroad Company president Leland Stanford drove the "Golden Spike" marking the opening of the rail. To document the celebration, Andrew J. Russel shot his photo, "Joining of the Rails," which excludes the presence of any Chinese laborers. The iconicity of Russel's photo and its absenting of 13,000 Chinese railroad workers is in stark contrast to History of California which renders their presence visible and at center.

Refregier's History of California mural depicts significant historical events in California. The subject matter of the mural ranges from the encounters of Native Americans with early Spanish colonists and the establishment of missions and settlements, to depictions of the Mexican-American war and the westward expansion by American settlers during the gold rush of 1848. In panel #12, "Miners Panning for Gold," Refregier shows the white male settlers who moved to California to extract gold from the state. 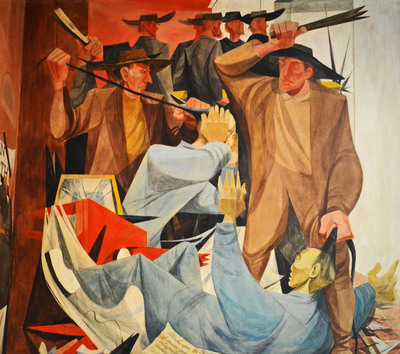 Complementing the mural's broad historical arc are panels depicting events specific to San Francisco including the 1934 San Francisco Waterfront Strikes and the Sandlot Riots of 1877. The riots began on July 23 and lasted for three days, and when they ended four Chinese people were killed and property was destroyed. In panel #19, "Beating the Chinese," Refregier represents the racialized violence that erupted during the Sandlot riots in the encounter between the white working class and Chinese community in San Francisco, who settled there after the building of the Trans Continental Railroad. In this panel, Refregier paints a mob of white men holding down two Chinese men by their ponytails. The couple in the foreground of the mural shows the Chinese man thrown to the ground while the white man holding him by his ponytail raises a club. This violent moment in suspense is indicative of the violent anti-Chinese sentiment that would lead to the 1882 Chinese Exclusion act, which would ban the immigration of Chinese people into the US for 10 years. 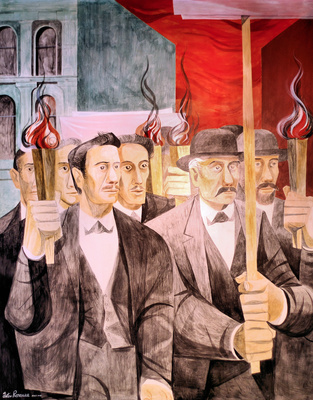 Refregier's History of California and its critical representation of the state became a site of controversy. During the making of the mural, some of Refregier's panels were censored for their strong pro-labor and leftist themes. The text accompanying panel #14, "Torchlight Procession," describes how the artist was made to paint out the "8 Hour Day" picket signs in the mural. In this panel we can see a group of organized men holding torches and a picket sign on the right, which just so conveniently remains out of the frame.

Several years after the completion of History of California 1948, the work became the center of another controversy. In 1953, Republican Senator Hubert Scudder, Representative Donald L. Jackson, and then Representative Richard Nixon demanded that the mural be destroyed for promoting communist propaganda and depicting the State's history in a negative light. The mural's depiction of the labor movement, working class, and racial tensions was contrary to the politicians' idea of the Golden State. The effort was later defeated and the murals were preserved under the National Register of Historic Places in 1979.

In 2014, descendants of the Chinese laborers who worked on the transcontinental railroad gathered to reenact their own version of the famous golden spike photograph. Read more about it here. 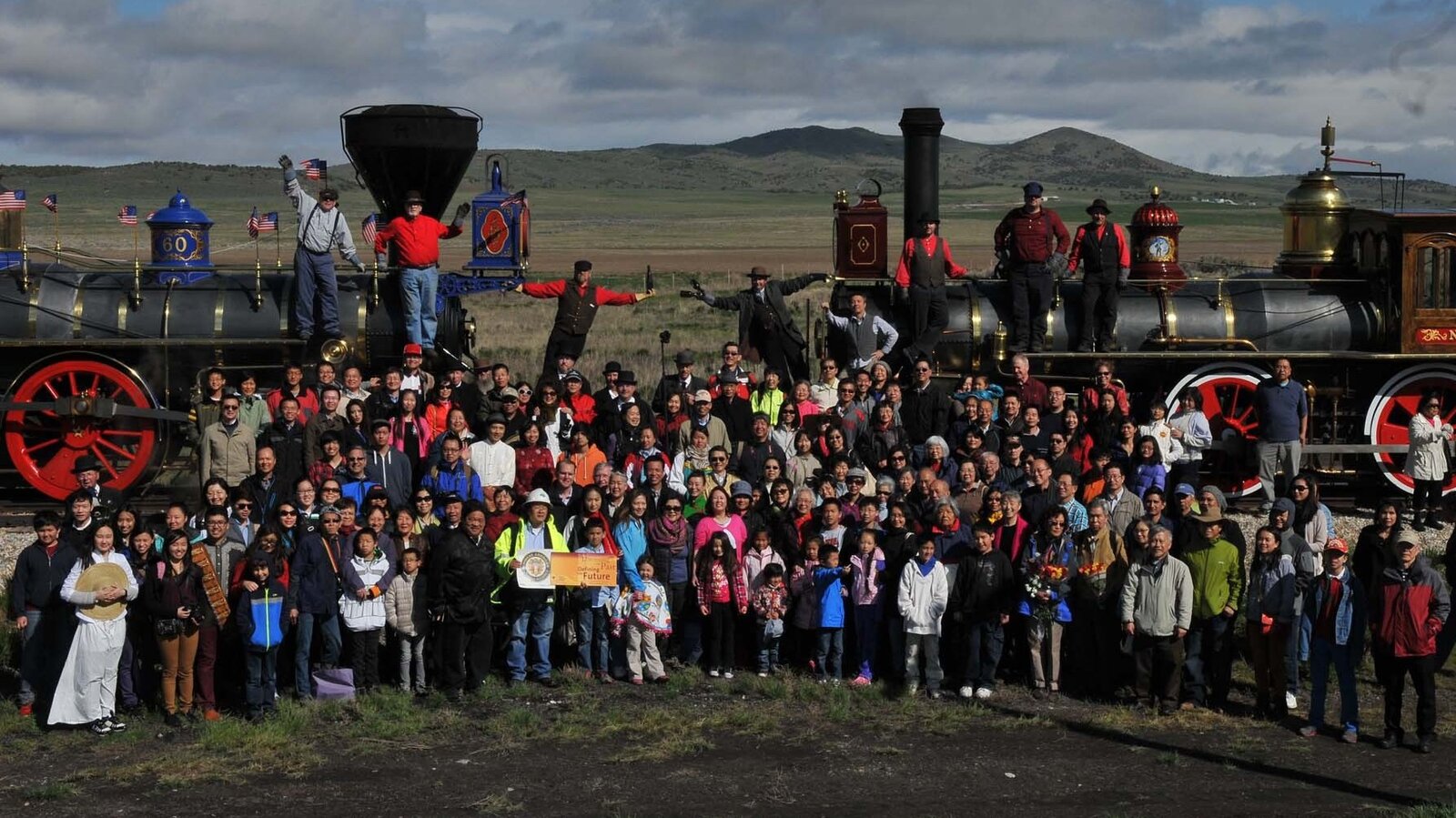 Trial of the Rincon Annex Murals
Art (and History) on Trial: Historic Murals of Rincon Center