During WWII, on August 6, 1945, the US dropped a nuclear bomb on Hiroshima and, three days later, another onto Nagasaki. African-American painter Jacob Lawrence captured the horror of the US attack on Japan in the Hiroshima series (1983), his reinterpretation of John Hersey's Hiroshima published in The New Yorker. For this series Lawrence took Hersey's account of several survivors from America's nuclear bombing of Hiroshima and reimagined it through a more abstract, universal perspective. In eight panels Lawrence painted reds peeling back to reveal white skeletal figures. The distorted figures look up to the sky with bent hands holding onto dead birds and flightless kites. The figures pose with arms up or together, huddled under fallen ceilings. Through his abstract composition, Lawrence captures the shock and destruction in Hersey's account and demands empathy from the viewer of Hiroshima. 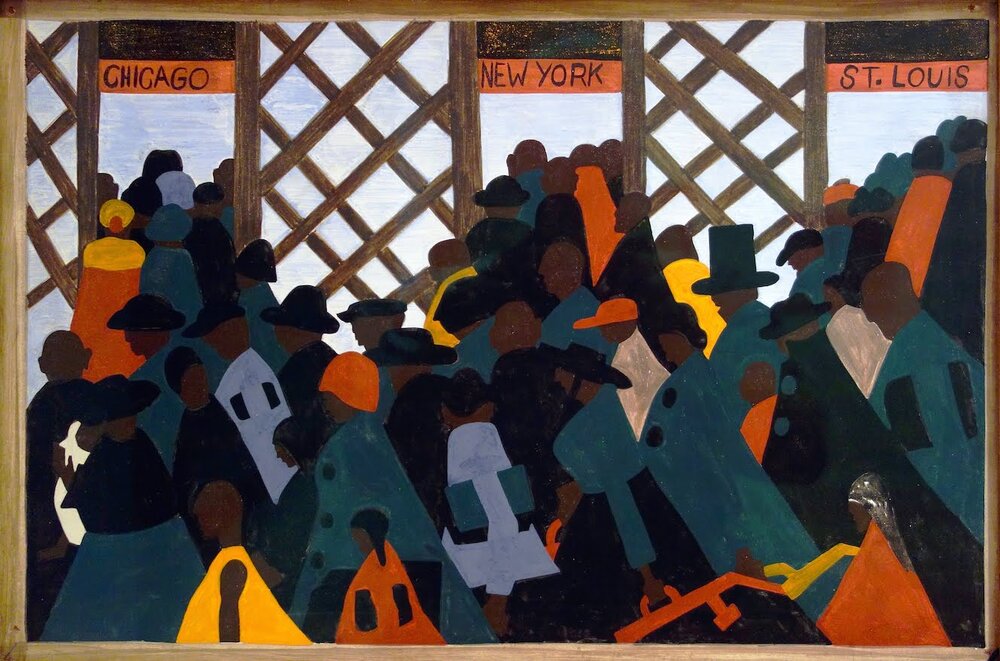 Lawrence's Hiroshima series demonstrates his abilities as an artist and as well as a story teller. Lawrence's unique aesthetic can be seen throughout all of his work. He received his art training through the Works Progress Administration, the Harlem Art Workshop, and the American Artists School in the 1930's. Describing his style, the Museum of Modern Art in New York states, "The vivid pattern and color—created in tempera paint as Lawrence worked on all the panels at once—reflect an aesthetic that itself had migrated from the South." His earlier paintings depicted scenes of everyday life in Harlem and major events in African-American history. For example, his 60-panel series, And the Migrants Kept Coming (1940-41), illustrates the Great Migration that took place during and post-WWI. The Great Migration marked a period where 60 million African-Americans moved out of the rural South and into industrialized cities in the Western, Mid-Western, and Northern United States. Lawrence had a personal connection to And the Migrants Kept Coming because his family migrated out of South Carolina and Virginia to the North. Lawrence was born in Atlantic City, New Jersey in 1917, and after a couple of moves, Lawrence settled in Harlem at the age of thirteen. In 60 panels, Lawrence tells the story of anti-black racism in the north and south through scenes of movement and waiting and expressions of despair and hope.

In contrast to his dystopic Hiroshima, Lawrence painted his Builders series later in his life, which "features paintings, drawings, and prints that communicate the artist’s belief in the possibility of building a better world through skill, ingenuity, hard work, and collaboration." From 1946-1997 he created paintings using the theme of building. In his painting Builders (The Family), we see a black family walking past workers building a structure. As opposed to the depiction of a world destroyed, Builders (The Family) represents a world being built up to support life. The optimism of Builders (The Family) can be seen the bright reds, yellows, and blues. At the center of the painting we see a family holding hands: the parents look down to the sidewalk with a look of contentment, the child on the left looks to the  construction workers, and the child on the right looks up with a smile. Unlike the grim figures of Hiroshima, the figures here display an optimism for the future. 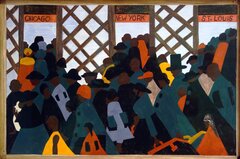 Understanding Race
<p>Theme Semester at the University of Michigan, Wi...

Regions of the United States