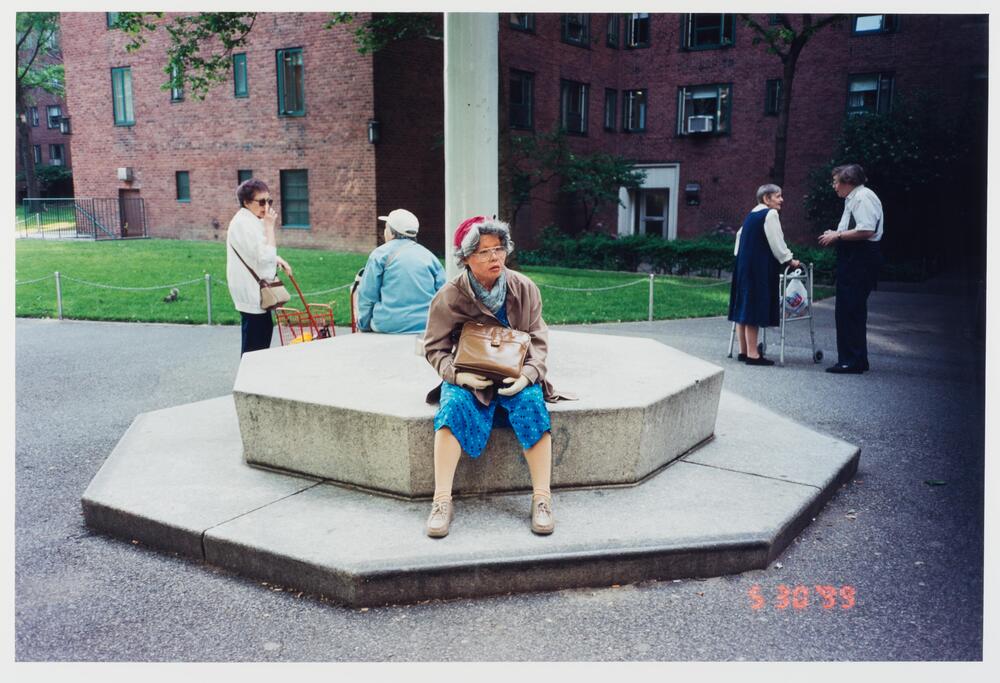 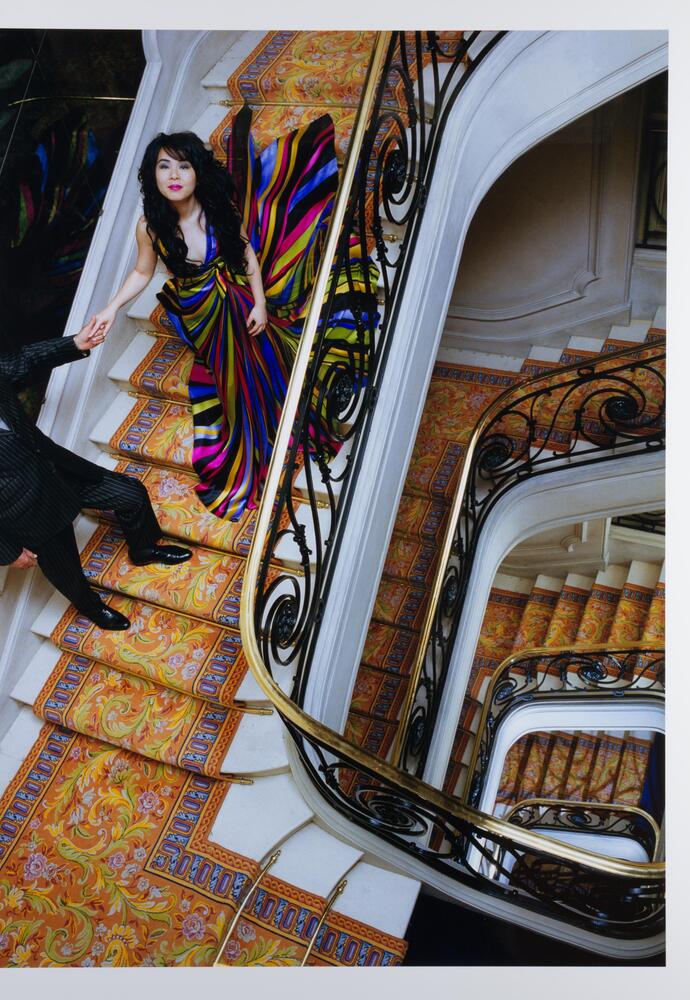 It's important to look at Lee's work within a transnational framework. As a Korean artist, trained in the US, and producing work around the world, Nikki S. Lee's art takes on different meaning as she and her identity is constantly resituated and recontextualized. Lee's self-portraits document her attempts to assimilate into subcultures and communities and explores how relationships are constructed and composed through photography and film. The photos in her series Parts (2002-2005) show Lee with someone else cropped from the image. The cropped photos lead the viewer to question the significance of the other in relationship to Lee. Paris #206 shows the artist holding the hand of someone cropped from the photo descending a winding staircase with her gown in stark contrast to the rug. As the protagonist of the photo, Lee becomes lost in the opulence in the setting, and yet hypervisible through the blunt cropping of the protagonist's other. Descending the spiral staircase, Lee's upwards stare meets us and brings our attention to the photo's partial other.

In contrast to Parts, Projects (1997-2001), an earlier photo series, captures snapshots of Lee while fully immersed in various American subcultures including punks, business men, and exotic dancers. As part of her method, Lee participated in the community by building relationships and dressing similarly to her subjects, even going as far as darkening her skin and changing her weight. Lee's ethnographic Projects explores themes of identity, authenticity, and community in the series' intimate and quotidian photos captured through point-and-shoot cameras by her subjects, a technique that decenters Lee and forces the viewer to see her in relationship to the others, including the photographer. 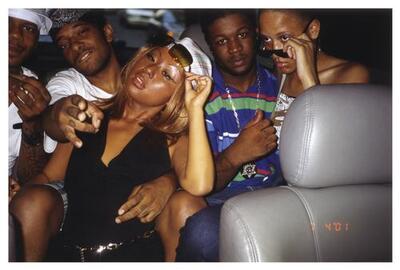 Lee's Projects allows for conversations around Asian/American identity and femininity, but also raises important questions and critiques about the limits of such a project. Unlike in Parts where Lee takes performs in scenes of intimacy, in Projects she can be seen taking on various forms of ethnic drag. In the series, Lee produced the Hispanic Project and the Hip Hop Project, both of which she darkened her skin for. Critiques of her work argue that images like these traffic in the racist theatrical practice of blackface, which was popularized in the minstrel shows of the American early 19th century. Similarly, artists like Cindy Sherman, who Lee has also been compared to, have received criticism for her Bus Riders series for its use of blackface. The work of Lee's challenging and at times troubling photographs explore the Asian/American identity and its simultaneous fluidity and un-assimilability across subcultures and communities. For example, in this photo taken for her Hip-Hop Project we see Lee posed in between four of her subjects. With her skin darkened, exaggerated makeup, and overdrawn lips she lifts her sunglasses up to gaze just past the camera. Three of her subjects stare directly into the camera, even pointing directly at it, except for one woman on the right. This woman, almost contrary to Lee, tilts her sunglasses down to look over them in a gesture that reads like suspicion. These glances signal a tension central to Lee's work regarding themes of belonging and identity. 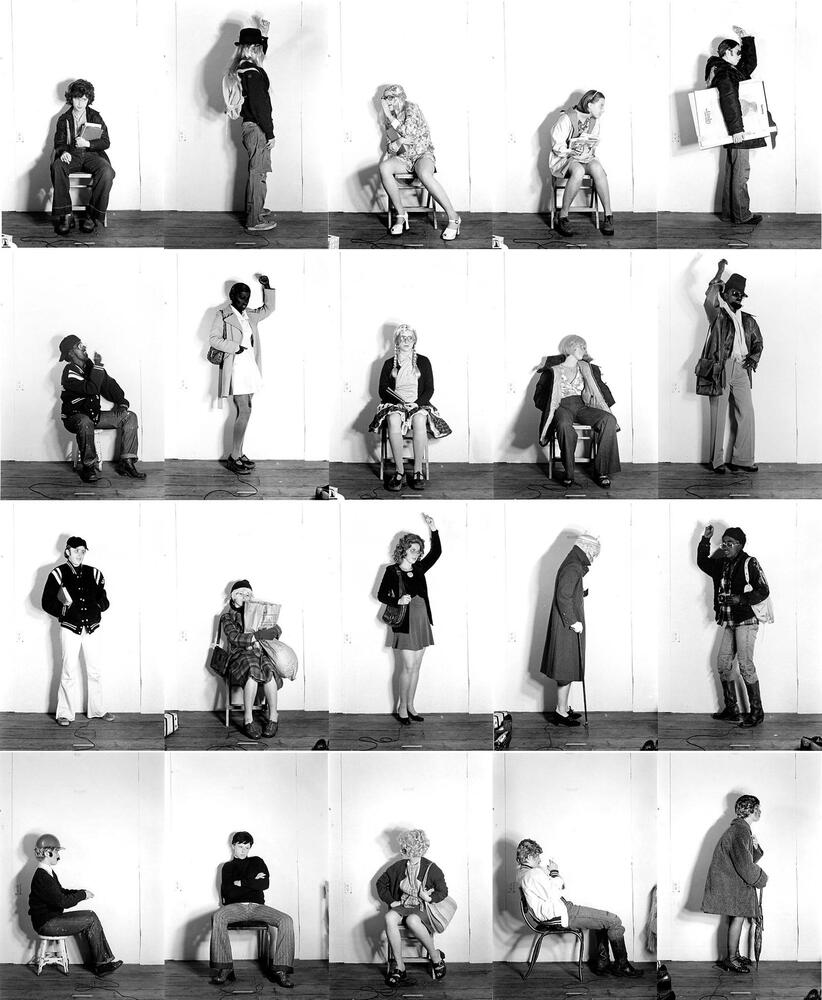 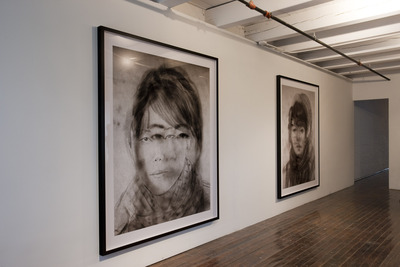 Her transnational artistic production and practice is present in Projects and Parts where we see Lee as a fluid subject and/or a cosmopolitan protagonist moving across national boarders. From a different point of view, Lee's Layers depicts the artist from the perspective of portrait artists in different cities. Describing her motivations for Layers she states,"I wanted to find out how people from different cultures would portray my face." Lee traveled around the world to places like Buenos Aries, Rome, and Bangkok and asked street artists to draw her portrait. Lee then superimposed the sketches producing her portrait from each city. Layers shows the different ways Lee is drawn and represented across the world. Like in her two photo series, we see Lee in through the eyes of other artists. 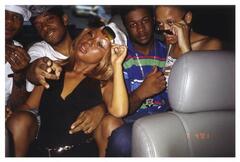 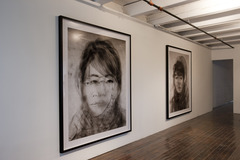 regarding others
See 12 Included Resources
Self-Portrait: Vertical Motion Up, Medium
1992/1.150