David Chun was born on February 17, 1898 in Honolulu, Hawaii. When he was seven, Chun moved to China with his family where he would study art when he grew older. Chun continued his art training when he moved to San Francisco in the 1920's. As an artist he was a printmaker, painter, professional lithographer and illustrator who exhibited his work in San Francisco, California and was the first president of the Chinese Art Association.

Chinese Shrimp Camp illustrates a scene from the Chinese shrimping in﻿dustry in the Bay Area. Chun's lithograph depicts four Chinese workers processing a harvest and filling baskets with shrimp to dry. Chinese immigrants had been in the area since 1855 and established at least 2 dozen shrimp camps in the San Francisco and San Pablo bays. Shrimping was one of the main industries that sustained the Chinese immigrant community in the Bay Area. One of the largest, China Camp Village, was home to as many as 500 Chinese people. While some shrimp was sold locally most of it was exported back to China. Anti-Asian racism, however, negatively impacted the Chinese community and shrimping industry. Racist violence, the Chinese Exclusion Act of 1882, and a law restricting the Chinese shrimping industry and prohibiting exportation would drive many of the camps to shut down. 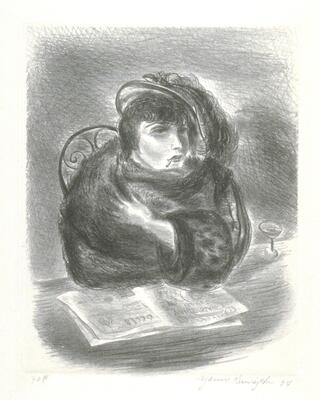 Chinese Shrimp Camp was made by Chun under the Works Progress Administration. Signed into law under the Franklin D. Roosevelt administration, the WPA created federally funded public works that employed millions, including artists. Other Asian artists, like Japanese artists Isami Doi and Yasuo Kuniyoshi, and Chun produced artwork during the WPA that give insight into the experiences of Asians in America. After his work with the WPA, Chun went on to advocate for a return to traditional Chinese aesthetics in the beautification of Chinatown in San Francisco and would continue to illustrate Chinese life in the Bay.