Part of: Bible as Literature (7 resources )
| 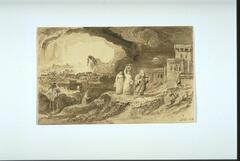 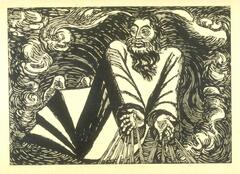 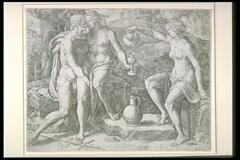 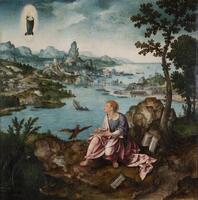 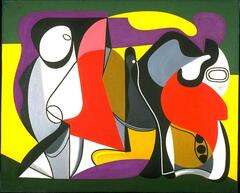 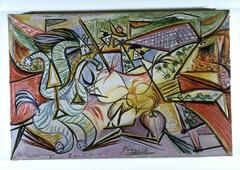 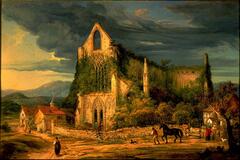 Eve Tempted by the Serpent

Title
Eve Tempted by the Serpent

Label copy
March 28, 2009
During the first third of the sixteenth century, Defendente Ferrari dominated the painting market around the northern Italian city of Turin. Alongside a number of large, complex altarpieces, Ferrari and his workshop also produced many smaller works for domestic settings, including this panel depicting Eve in the Garden of Eden. The circular frame gives the impression of a view through a window onto a paradise; the nude figure of Eve and the Tree of the Knowledge of Good and Evil tower in the foreground. The serpent—depicted with the leering head of a bearded man—coils around the tree trunk and invites Eve to eat the fruit from the tree even though God has forbidden it. Her nudity reveals that she still lives in a state of blessed ignorance. This bliss, however, will soon come to a tragic end, since she bends a branch with her right hand to reach the forbidden fruit at its tip. Adam probably appeared, ready to give in to temptation, on a now-lost pendant panel.

Subject matter
This panel represents Eve in the Garden of Eden tempted by the serpent to eat the forbidden fruit from the Tree of Knowledge of Good and Evil (Genesis 3). The serpent appears with the leering head of a bearded man to demonstrate his diabolical nature. This panel originally formed part of a piece of furniture, perhaps a type of marriage chest known as a cassone, where it would have been complemented by other painted decoration, including a companion image of Adam.

Physical Description
A nude woman with long hair flowing down her back grasps a tree branch with her right hand and bends it downward in order to more easily pluck the green fruit dangling at its tip with her left hand. Her white body contrasts starkly with the darker tones of the surrounding landscape. The less conspicuous figure of a serpent with the head of a bearded man coils about the trunk of the tree next to the woman and fixes her with his stare.