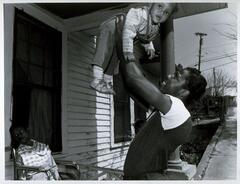 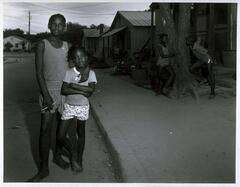 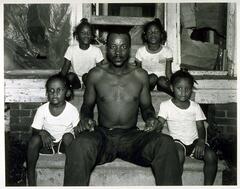 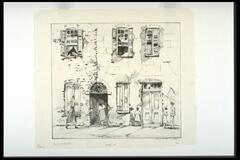 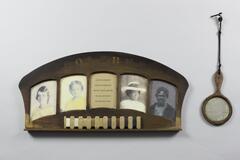 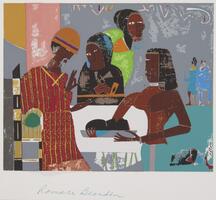 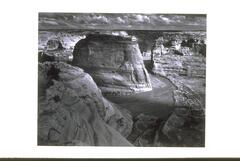 Label copy
March 28, 2009
In 2002 Betye Saar embarked upon her series Colored: Consider the Rainbow, which explored hierarchies of race and forms of discrimination that exist within the African American community and the ways in which people are judged by, and judge others, based upon the color of their skin. In this assemblage Saar reinterprets vintage photos by integrating them with other media, materials, and objects. Colored is composed of a salvaged wood frame, portrait photographs of African American women, and an old strip of hosiery thread samples. The photographs cover a spectrum of skin tones, from light to dark, mirroring the range presented by the thread samples. At the center, an old proverb gives shape to this theme of color distinction: “Light is alright / Yellow is mellow / Brown, stick around / (but black don’t crack).” Adjacent to the assemblage, the artist has installed a hanging hand mirror, inviting viewers to reflect on their own skin color. “It is my goal as an artist,” Saar has said, “to create works that expose injustice and reveal beauty. The rainbow is literally a spectrum of color while spiritually a symbol of hope and promise.”

Subject matter
From Betye Saar's series "Colored -- Consider the Rainbow," begun in 2001 in which she tackled the issue of racism through works focusing on skin tone and forms of discrimination and hierarchies of race within the African American community. This work references the color spectrum through actual photographs as well as pigmented thread spools, a poem about color distinctions, and a hand mirror inviting viewers to reflect on their own skin color.

The poem is a reference to a popular rhyme from the Jim Crow Era: “If you’re white, you’re alright; if you’re brown, stick around; if you’re yellow, you’re mellow; but if you’re black, get back!” (and similar slight variations of the rhyme). Saar's addition of "but black don't crack" affirms that Blackness, and dark skin is positive despite all of the negative stereotypes.

Physical Description
An assemblage of found objects: a salvaged wood frame with wood inlay letters spelling "COLORED," four portrait photographs of African American females (two photogaphs on either side of a printed poem), nine thread samples under photographs, and one hand mirror hanging on a decorative brass hook to the viewer's right of the frame. The poem reads:
"Light is Alright
Yellow is Mellow
Brown, Stick Around
Black, Get Back
(but black don't crack)"

The wood has a strong smell, may have been treated with molasses.