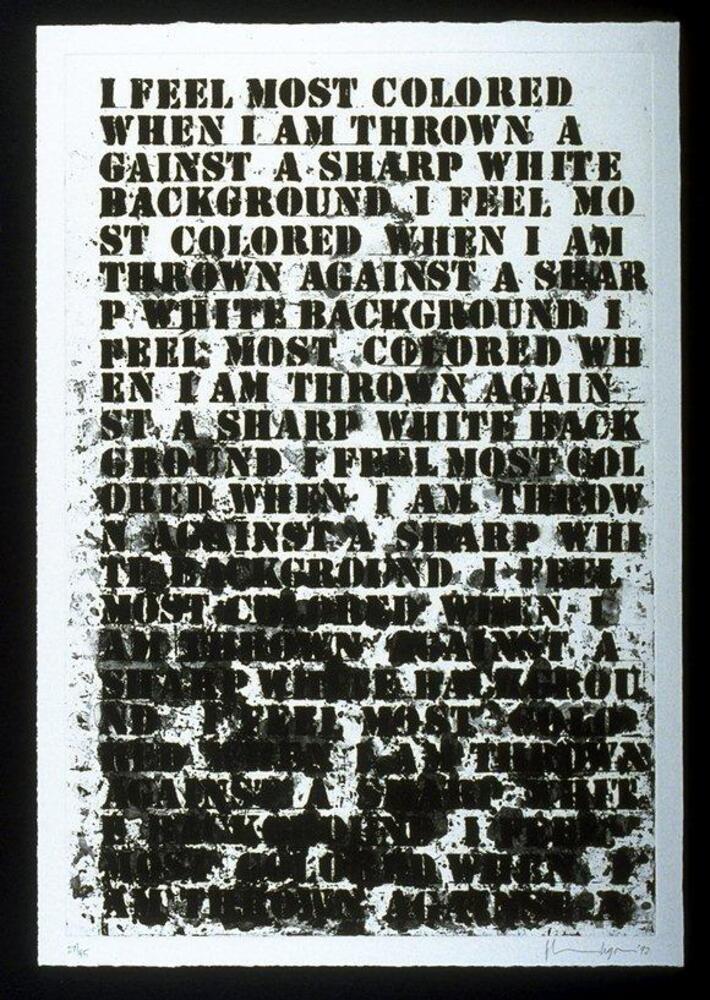 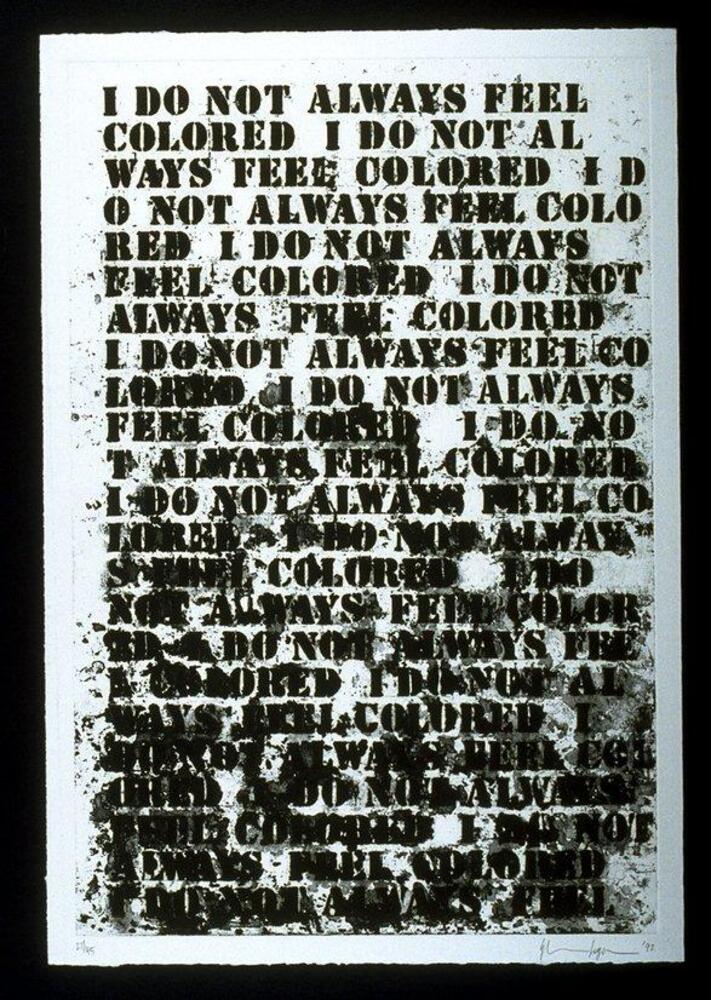 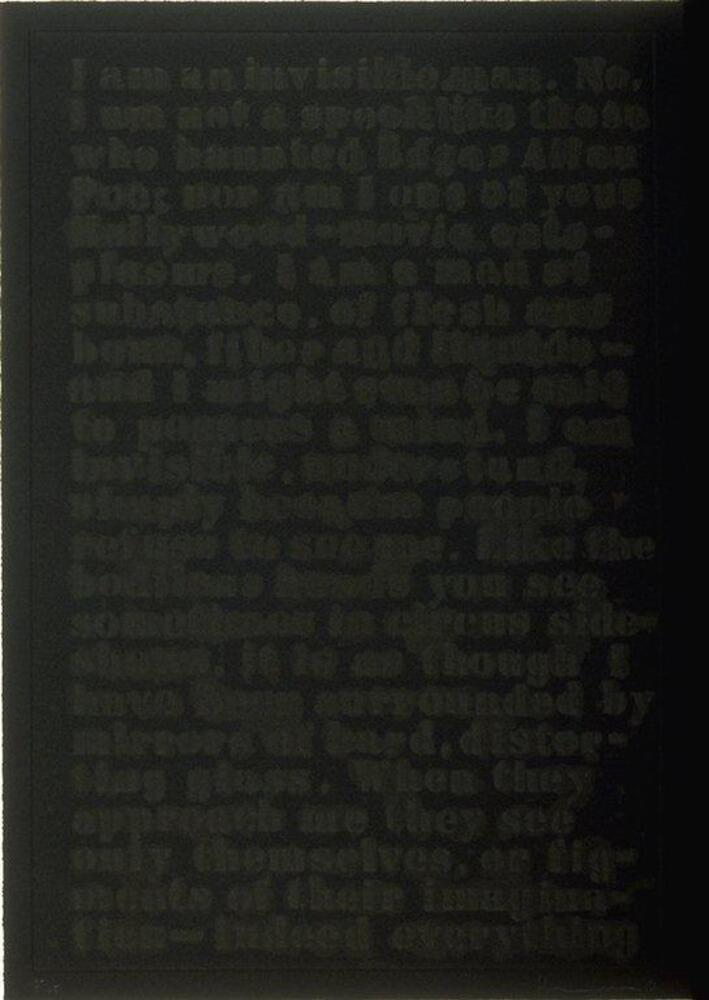 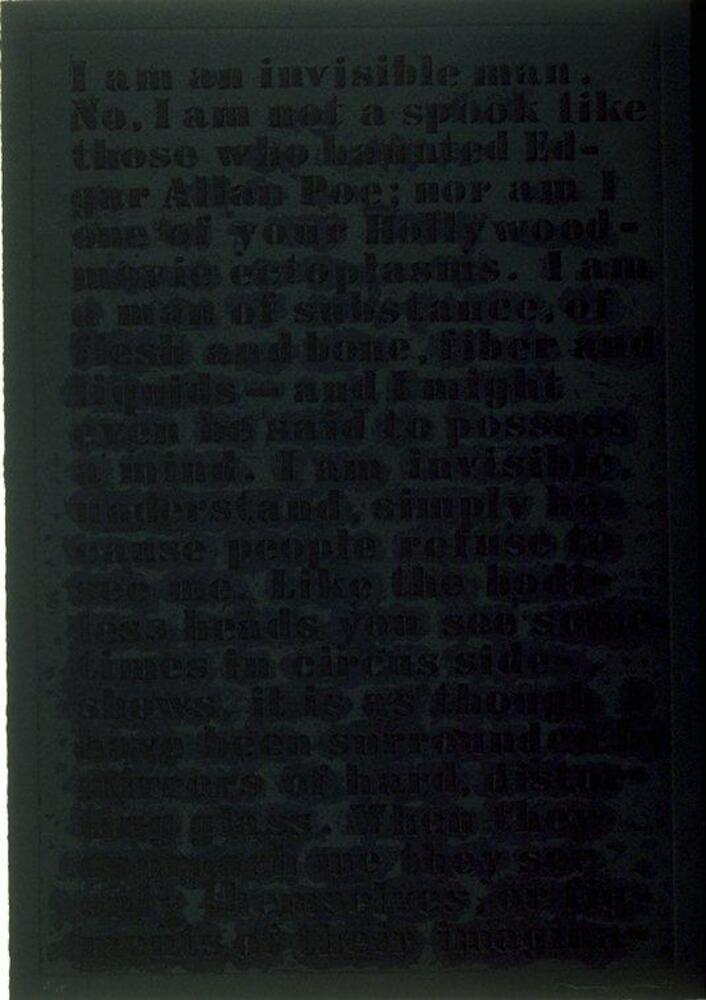 Glenn Ligon was born into a black working-class family in the Bronx, New York in 1960. He attended a private school on scholarship and his mother enrolled him in drawing and pottery classes. According to Ligon, his mother supported his artistic development from a young age because for her “culture was betterment. Anything we wanted to read was fine. Pottery classes or trips to the Met were fine. Hundred-dollar sneakers? No.”[1] He initially launched a career as an abstract painter after he graduated from the Rhode Island School of Design and Wesleyan College in the 1980s. His experience at the Whitney Museum’s Independent Study program, however, “introduced him to theory and helped transform him into a conceptual artist.”[2] Thus, his body of work, which includes painting, neon, installation, video, and print, builds on the legacies of modern painting and recent conceptual art. Ligon has pursued an incisive exploration of American history, literature, and society that invites the observer to participate actively by thinking and questioning issues surrounding race, sexuality, representation and language.

Although Ligon uses multiple media, his paintings and prints with text are among the most well known. Ligon’s explorations with text and paint began when he developed an interest in incorporating into his work meaningful ideas he was reading about in literature. He realized he could quote those texts and make language the central focus of his paintings and prints. He then “came upon stencils as an economical, efficient, and durable solution that allowed him to use ‘text as the work itself,’ something paint would not allow.”[3]

Ligon appropriates texts from a variety of literary writers including Gertrude Stein, James Baldwin, Ralph Ellison, Walt Whitman, and Zora Neale Hurston. His use of oil crayon with letter stencils “transforms the texts he quotes, making them abstract, difficult to read, and layered in meaning, much like the subject matter that he appropriates.”[4]

In his work, Ligon likes to play with both clarity and opacity. For example, the repetition of a single sentence from the top to the bottom increasingly obscures the letters to the point where language almost disappears, “as do customary racial ways of assigning identity to people. The black and white duality of text and page becomes a metaphor of racial relations and how we construct oppositional categories of identity.”[5]

These pieces belong to the 1992 series entitled “Four Etchings” in which two prints have text adapted from Ralph Ellison’s Invisible Man and the other two from Zora Neale Hurston’s famous essay, “How It Feels to Be Colored Me.” Ligon has stated that Four Etchings is “about the idea of race as a social category. Race is not something inherent to one’s being: one does feel more or less colored, depending on the situation.”[6]

UMMA’s 1993/2.13.1 includes one of Hurston’s lines that reads, “I feel most colored when I am thrown against a sharp white background.” The words repeat, from the top to the bottom of a white paper, becoming increasingly smudged and illegible.

-       Describe how you feel about an artist uniting the visual with the literary.

-       What effects does the paint have on the meaning of the literary texts Ligon uses in his work?

-       In the specific case of Hurston’s line, how does Ligon’s method revitalize discussions about racial issues?

In Ligon’s prints, the black words blur and smudge with each repetition eventually making the white background barely distinguishable from the black words.

-       Describe the interplay between whiteness and blackness

-       In what ways is that interplay a reflection on the meaning of binary representations of racial identity in the U.S.?

-       Betye Saar explores ideas about skin color through photographs while Ligon uses literary text to reflect on the meaning of color/race in the U.S. What do you think about these approaches? Is one more effective than the other? Why or why not? How do both approaches advance our understanding of race?

Ligon is a conceptual artist whose paintings and prints contain racially charged prose. Do you think this makes him a political artist or a protest artist?

-       Can their work still be considered political? Explain.

Preview: Glenn Ligon in Season 6 of “Art in the Twenty-First Century”

Vogel, Carol. “The Inside Story of Outsiderness” http://www.nytimes.com/2011/02/27/arts/design/27ligon.html?pagewanted=all