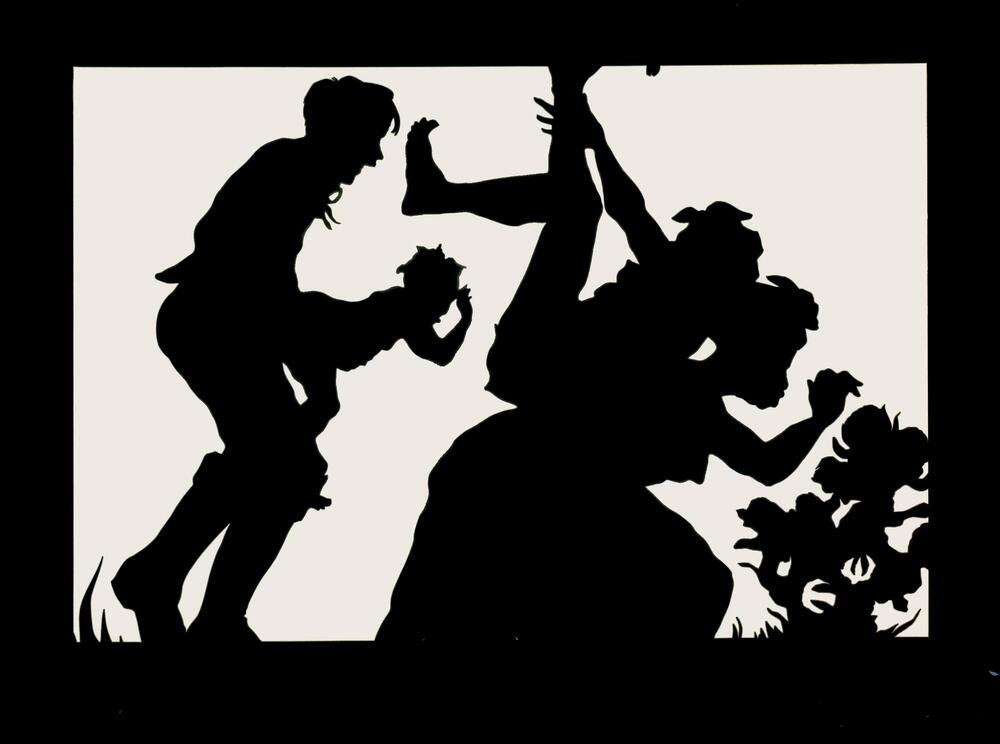 Described as “provocative and emotionally wrenching, yet overwhelmingly beautiful and intellectually compelling,” Kara Walker’s work highlights the problems of racism and sexism that defined the antebellum South and that continue to haunt our society through pervasive stereotypes.[1] Born in California, Walker moved with her family to the South when she was 13 years old. Spending her teenage years in the South made Walker conscious of the “reality of viciousness” of that place which she later decided to explore in her work when she became an artist.[2]

Walker is best known for appropriating the 18th and 19th century art of silhouetting and creating figures and narratives that “have to do with exchanges of power and attempts to steal power away from others.”[3] Her creativity and boldness in addressing highly charged themes such as slavery, violence, oppression, and sex has sparked reactions ranging from acclaim to outrage. In 1997, just three years after she received her MFA from the Rhode Island School of Design, Walker was awarded the MacArthur “Genius” Grant. This award not only came with recognition and prestige, but it also provoked indignation among a previous generation of African-American artists—most notably Betye Saar—who argued that Walker’s art undermined their work against racism.

In spite of the controversy and criticism, Walker continues to use the silhouette as a narrative device that mixes historical facts, stereotypes of racism and sexism, and her own imagination. Her work has been exhibited at major institutions in the U.S and around the world. Asked about the meaning of her work, Walker replied that “it is not just an examination of race relations in America today, it is a part of it, it is a part of being an African American woman artist, but it is about how do you make representations of your world given what you’ve been given.”[4]

Walker’s signature technique consists of black cut-paper silhouettes on a life-sized scale placed against white walls. Her figures are typically installed in a room-sized mural that surrounds viewers in a manner similar to cycloramas, the large-scale history paintings in the round that were popular at the end of the nineteenth century, just before the advent of the cinema. In some of her installations Walker uses overhead projectors to throw colored light onto the walls of the exhibition space. Such lights offer a background to her silhouette figures that create a fantastical world for her fictions while casting a shadow of the viewer’s body onto the walls that implicate them in the stories. According to Walker, “I just need the viewer, like an author needs a reader, to fill in the rest of the tension of the story.”[5]

The content in Walker’s art includes physiognomic stereotypes, depictions of sexual abuse from all quarters (blacks, whites, adults, children, animals), and the use of numerous symbols of antebellum south such as clothing (hoop skirts), footwear, chains, razors, ropes, and others. All of these things work together to create narratives that portray the horrors of slavery and plantation life. When talking about the content of her work, Walker says:

“I knew that if I was going to make work that had to deal with race issues, they were going to be full of contradictions. Because I always felt that it’s really a love affair that we’ve got going in this country, a love affair with the idea of it [race relations], with the notion of major conflict that needs to be overcome and maybe a fear of what happens when that thing is overcome—And, of course, these issues also translate in to [the] very personal: Who am I beyond this skin I’m in?”[6]

A horizontal lightbox enclosed by a wide, black molded frame in which Kara Walker’s signature silhouettes are encased in linen and lit from behind. Silhouettes represent four figures: an Anglo American male at left, a child, and two females—all African American—are engaged in power struggles that evoke both racial domination and struggle as well as sexual engagement and abuse. Visual tension is created by the disparity between the pristinely beautiful silhouettes and the atrocities their interactions represent.

-       What are the gender dynamics depicted in the scene?

-       Does the black silhouette figures against the white background have an effect on your perception of the image? Explain why or why not.

-       In what ways do you think Walker appropriates preconceived ideas about the antebellum South in her work?

-       Do you think Walker’s art promotes a continuity of conflict around race issues in our society? Explain why or why not?

-       In a recent event titled “Occupy Kara Walker,” Walker had an honest conversation with a group of people in New York City about her work in the context of the Occupy Movement. In that event, Walker asked the following question: “What role does the artist play in public discourse?” Consider that question and explain.[7]

The Art of Kara Walker. http://learn.walkerart.org/karawalker/