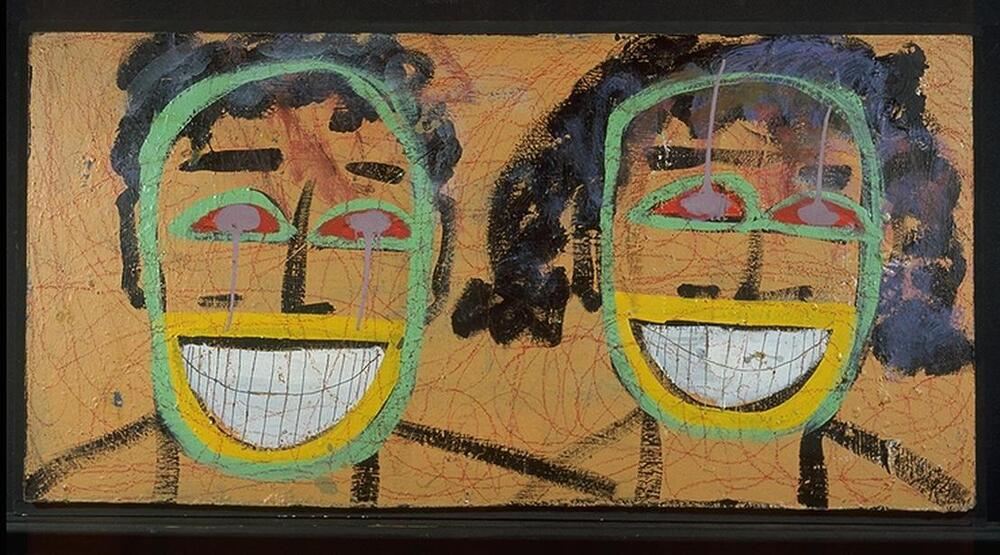 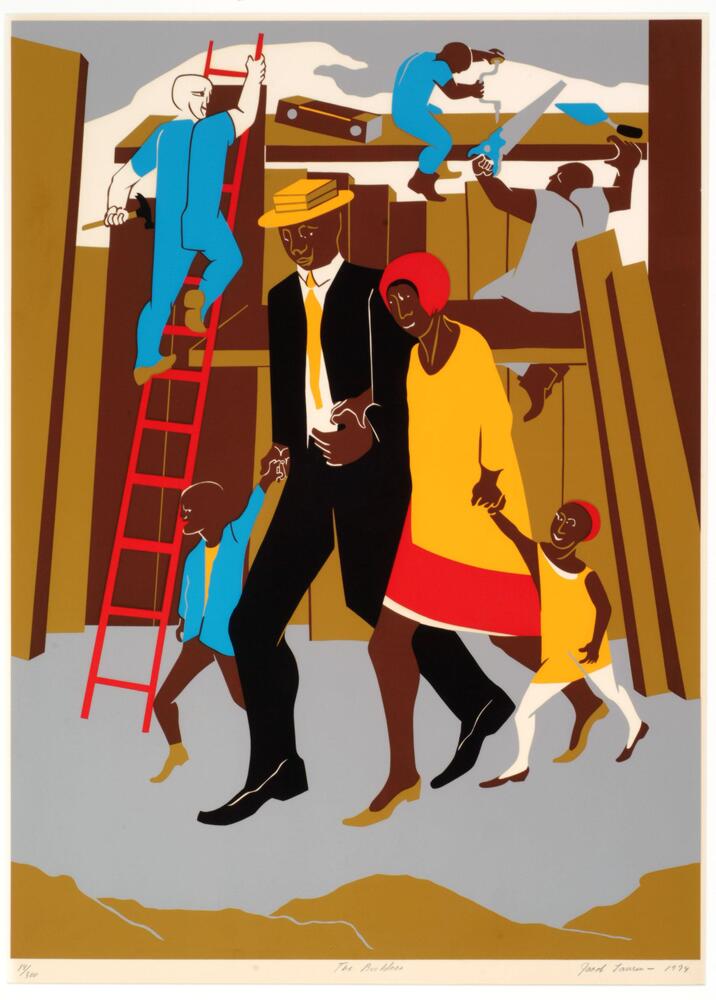 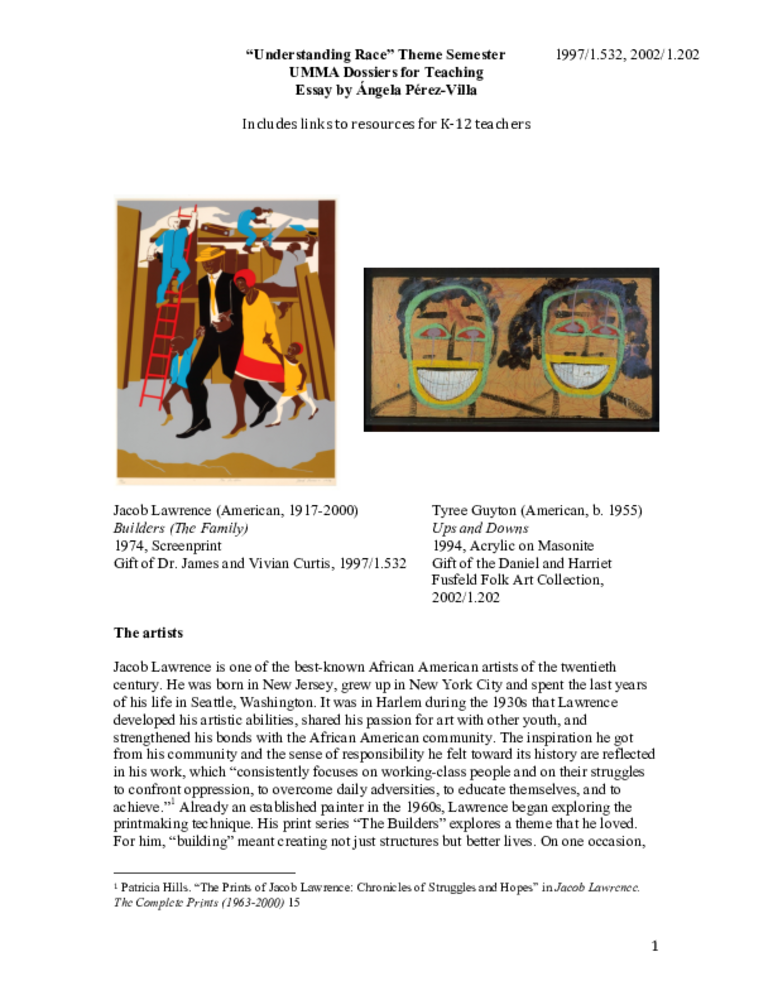 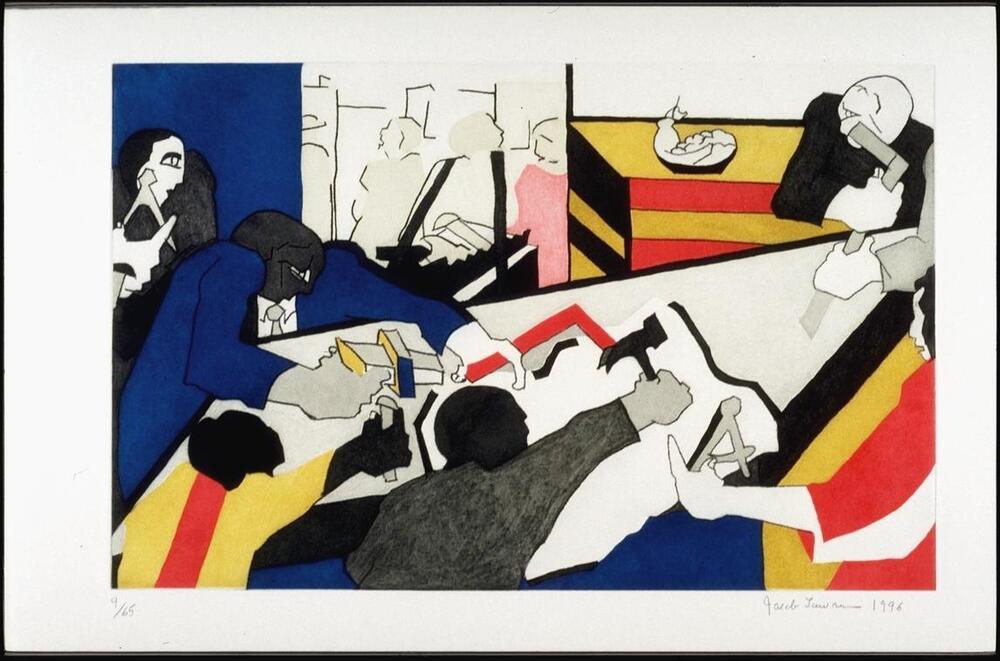 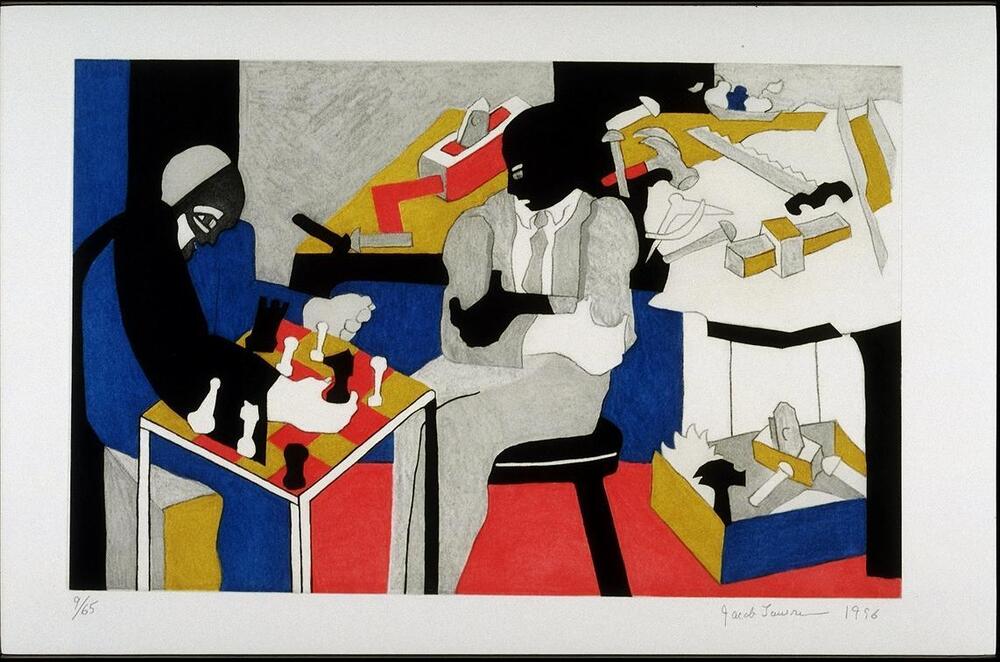 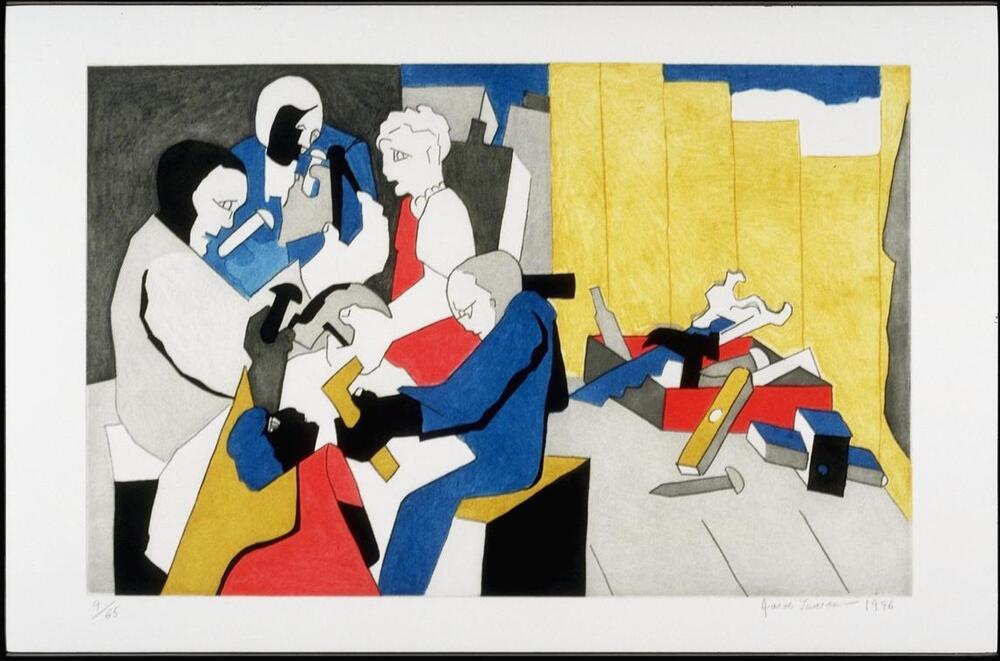 Jacob Lawrence is one of the best-known African American artists of the twentieth century. He was born in New Jersey, grew up in New York City and spent the last years of his life in Seattle, Washington. It was in Harlem during the 1930s that Lawrence developed his artistic abilities, shared his passion for art with other youth, and strengthened his bonds with the African American community. The inspiration he got from his community and the sense of responsibility he felt toward its history are reflected in his work, which “consistently focuses on working-class people and on their struggles to confront oppression, to overcome daily adversities, to educate themselves, and to achieve.”[1] Already an established painter in the 1960s, Lawrence began exploring the printmaking technique. His print series “The Builders” explores a theme that he loved. For him, “building” meant creating not just structures but better lives. On one occasion, Lawrence stated, “some of my paintings show man’s struggle, but building shows the beauty of people working together.”[2]

Lawrence’s desire to build unity through art is a vision that has appeared in the work of other artists such as that of Tyree Guyton. Guyton was born in Detroit and at the age of nine, his grandfather encouraged him to “paint the world” by giving him his first paintbrush. Guyton studied at the College for Creative Studies in Detroit and his work is animated by his faith in art’s ability to connect people and motivate social change. He is most well known for the Heidelberg Project, a multi-media installation begun in 1986 that transformed the streets, buildings and grounds of a neighborhood in one of the most economically and socially challenged areas of Detroit. This project’s success was possible through the help and solidarity of Guyton’s family and community members whose interest and engagement allowed them to reimagine and reclaim their depressed neighborhood through art. Guyton’s Heidelberg Project combines bold abstract painting with recycled materials of all kinds. The motif of faces is a recurring one in the Heidelberg Project and Guyton’s other work.

Both Lawrence and Guyton share an uncanny sense of hope that comes across in their artistic work even though they belong to different generations. Just as Lawrence wanted to depict the importance of building strong, harmonious and united black families through his images, Guyton “wanted to transform his neighborhood and revitalize the spirits of the people desensitized by anger and numbed by despair.”[3]

In the early 1960s, Lawrence began exploring various printing methods such as lithography, dry point, etching, and silkscreen. As he experimented with the aesthetic possibilities offered by those methods, his style “evolved from a clear dependence on drawing to an increased emphasis on form and color.”[4] In this sense, Lawrence’s prints began to display bold areas of flat, solid color that resembled the rich color in his paintings. This characteristic, for example, defines The Builders, The Family, a print prompted by Lawrence’s 1974 retrospective at the Whitney Museum of Art in New York.

For Lawrence, then, printmaking offered aesthetic potential as well as an opportunity to reach out to new audiences.

Guyton’s technique is different from that of Lawrence in part because of his concept of art as an interactive social process. The discarded objects that give life to his Heidelberg Project—baby dolls, telephones, vacuums, etc—stand next to assemblages of painted car hoods, old furniture and wood which commonly feature human faces. Outside of this installation art, Guyton has used the series format to render narrative and thematic content to his work. Series like Faces of God and Faces in the Hood depict faces of “people of all races, in all colors, with red hair, black hair, teeth clenched in anger, or expressions beaming with joy.”[5]

In Builders (The Family), an African American couple and two children walk by a construction site where black and white men are engaged in their work. The well-dressed family evokes a sense of serenity and purpose. The bold colors offer beautiful contrasts that make it a lively scene. According to Lawrence, “The Builders [theme] came from my observations of the human condition. If you look at a work closely, you see that it incorporates things other than the builders, like a street scene, or a family.”[6]

In Ups and Downs, two abstracted bust-length figures, one male and one female, look directly at the viewer with large smiles against a tan background filled with swirling lines and scribbles. The face and eyes of each figure are outlined in thick green, the mouths in thick yellow. The “whites” of the eyes are red, while the pupils are circles of pale purple. The work gets its title from the purple “tears” that drip down the face of the male figure and upwards on the female figure.

-       In what ways does his print promote racial and family unity?

-       Explain how the “building” metaphor works in this print?

-       What is Lawrence’s idea of the “family”? How is it similar or different from popular or scholarly understandings of the black family in the U.S.?

-       What kind of emotions are the faces expressing in this painting?

-       Given the social context in which Guyton produces his work, what do you think this painting says about his community in Detroit?

For Jacob Lawrence, visit the Picturing America website (http://picturingamerica.neh.gov/) for biography, resources and lesson plans on Jacob Lawrence.  See “Resource Book” as well as general introduction at the home page (find the Jacob Lawrence section after you “Click Here to Enter Gallery”).


[1] Patricia Hills. “The Prints of Jacob Lawrence: Chronicles of Struggles and Hopes” in Jacob Lawrence. The Complete Prints (1963-2000) 15 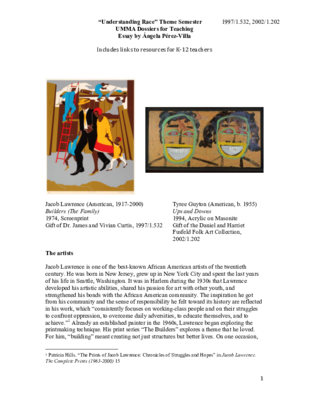