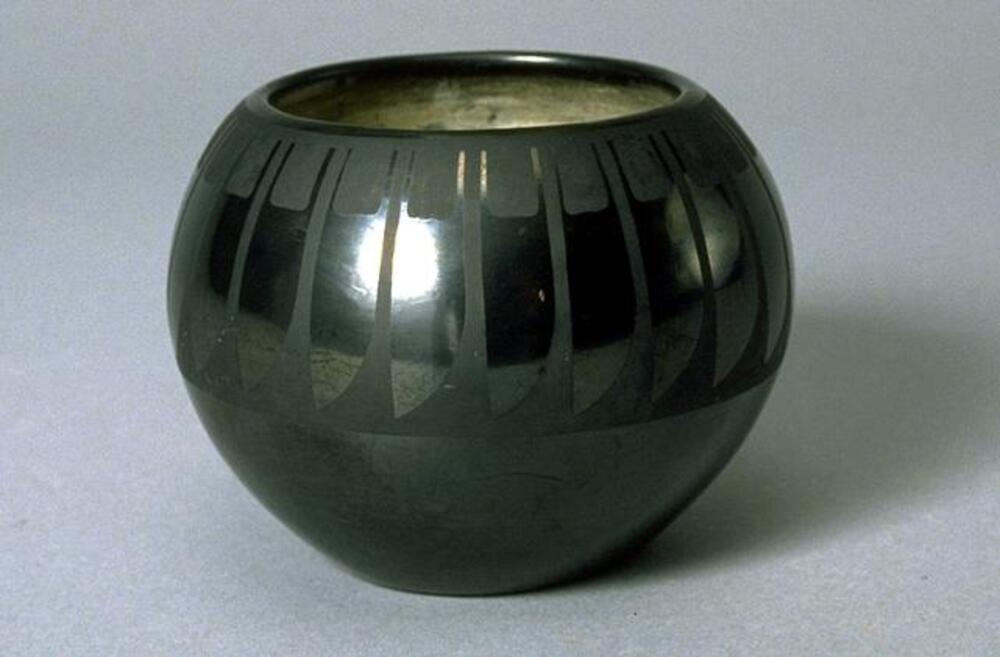 Maria Martinez was a modest American Indian woman from San Ildefonso Pueblo, a federally recognized, self-governing tribe in New Mexico.[1] Her artistic and technical ability with clay made her one of the most famous artists of the twentieth century. Martinez learned how to make pottery at an early age from watching her aunt, one of the finest potters of her generation. By the time Maria was a teenager, traditional pottery-making was in decline due to the introduction of commercially made goods spurred by the opening of the transcontinental railroad. Maria’s enthusiasm to keep the tradition alive made her an important figure in her community and that commitment was recognized in the early 1900s when the Director of the Museum of New Mexico at the time approached her with a request. He asked her to make bowls for the Museum using multicolor designs and techniques of prehistoric pottery discovered in an archeological excavation he directed near her Pueblo. Upon this request, Maria, in collaboration with her husband, Julian Martinez, studied and recreated ancient ceramics, experimented with firing and finishing techniques and produced vessels with a unique ebony finish called black-on-black. The artistic collaboration between Maria and Julian not only reintroduced to their people the art of pottery-making, which was facing extinction, but their style also became world famous. After her husband’s death, Maria kept making pots in collaboration with her daughter-in-law Santana Roybal Martinez, and finally her son Popovi Da. Throughout her life, Maria taught three generations of her family to make pots.

Coiled, smoothed, and shaped by Maria, this pot has a swollen belly that yields at both top and bottom to a tapered lip and foot. The vessel has been carefully burnished, a process by which a smooth stone is rubbed against the pot’s surface prior to firing in order to align the clay particles. As a result the fired pots are lustrous and have a glossy sheen. The contrasting matte effect is achieved by painting slip (liquid clay) onto the pot after it has been burnished. In accord with the traditional division of labor, Julian usually applied decorative elements after Maria had completed the vessel. He called the geometric, traditional design on this pot ‘stylized feathers.’

This is a blackware bowl with black-on-black decoration. The bowl is nearly spherical in profile, with a wide mouth. Around the upper half is a feather design, which looks like individual feathers hanging down from the mouth forming a ring around the circumference.

Visit the Picturing America website for biography, resources and lesson plans on Maria Martinez.  See “Resource Book” tab at the bottom of the page, as well as general introduction at the home page (find the Maria Martinez section after you “Click Here to Enter Gallery”).

General questions and topics for discussion with UM students

Contributions to this section were made by Pam Reister.

-       What does Martinez’s involvement in her community and her eagerness to teach pottery-making to younger generations tell us about the importance of kinship relations within the Pueblo communities in the American Southwest?

-        Toba Tucker is a photographer who has focused on Native American people in her work. She says “Often asked why I photograph Native Americans, I endeavor to articulate my purpose: collectively, Native Americans are an ancient people striving to retain their traditional way of life and integrity while confronting modern society and the dominant culture.” She created a portfolio of pueblo artist portraits (including Santana Martinez). Look at some of these images  Discuss the quote and the images.-        James Luna is a contemporary performance artist. His artistic statement includesIn the United States, we Indians have been forced, by various means, to live up to the ideals of what “Being an Indian” is to the general public. In art, it means the work “Looked Indian,” and that look was controlled by the market. If the market said that it (my work) did not look “Indian,” then it did not sell. If it did not sell then it wasn’t Indian.  I think somewhere in the mess, many Indian artists forgot who they were by doing work that had nothing to do with their tribe, by doing work that did not tell about their existence in the world today, and by doing work for others and not for themselves.

Discuss this statement in relation to Martinez work and career, and Toba Tucker’s quote.

Touched by Fire: The Art, Life, and Legacy of Maria Martinez. http://www.indianartsandculture.org/exhibits/maria/