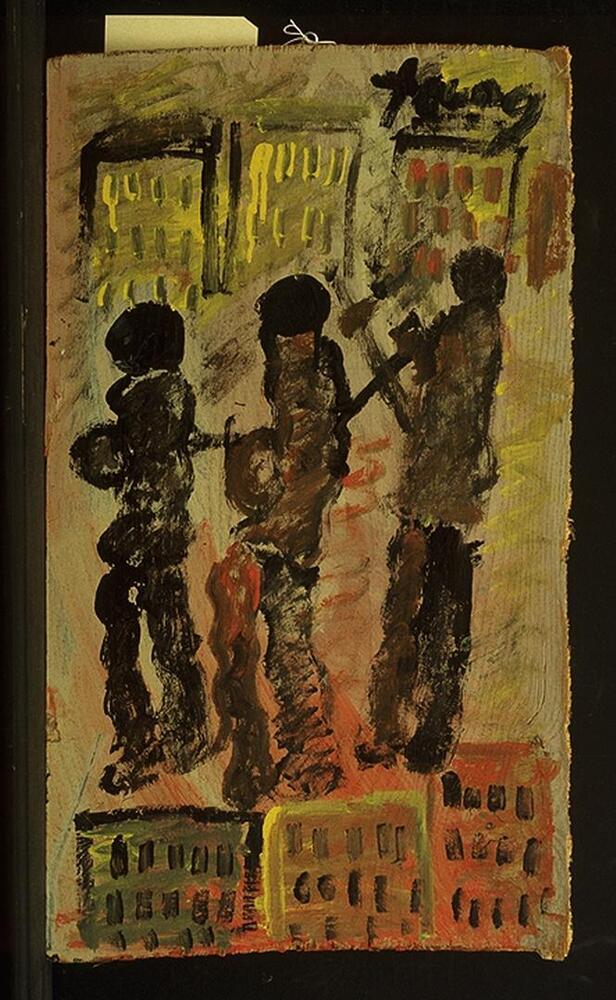 Purvis Young was a self-taught artist who lived most of his life in Overtown, a historically black neighborhood in Miami that experienced a severe drop in population and business activity due to urban renewal and the construction of interstate highways beginning in the late 1950s. These projects converted a once-thriving black community into a poverty-stricken and violence-prone area from which Young emerged as a convicted teen charged with breaking and entering. While completing a three-year sentence in a Florida prison, Young became interested in art and after his release he spent long hours at the public library where he pored over art history books and images of murals in Chicago and Detroit. Determined to paint rather than “stand around” out of work, Young drew inspiration from the technique of painters such as Rembrandt and Vincent Van Gogh and began to portray inner city life as he saw it and lived it. Young’s unbridled and vivid imagery depicts the stories of his own neighborhood. By addressing issues of power, alienation, ignorance, freedom, and oppression, Young expressed views of social injustice and sadness in his own idiosyncratic aesthetic form.

Young’s style is highly expressionistic and symbolic. His spontaneous style portrays distorted figures that are dramatized by thick layers of color and tones. Among his figures are galloping horses, dancing silhouettes, trucks, pregnant women, hovering angels and portraits of jazz musicians that reflect the cultural and harsh realities of life on urban ghetto streets. Young’s observations about life on the street were, thus, the source of his creativity. He painted on found objects such as discarded plywood and cardboards, and pieces of furniture.

Young is usually labeled as an “urban expressionist,” a “street artist,” and more commonly as an “outsider artist.”  This last label has been problematic. As explained by documentary photographer Gary Monroe, “the term outsider engenders further marginalization” and ignores the contexts through which self-taught artists have arrived at their art on their own.[1] He enjoyed some recognition from the “high-art” world while he was still alive. In spite of this recognition, however, Young continued his humble life in Overtown constantly reminding himself: “You gotta be Purvis, I gotta be myself.”[2] Today, the power of Young’s imagery is being deconstructed and re-presented in important museums and scholarly projects across the U.S.

“Three Guitar Players” shows three black figures carrying guitars at the center of the composition board. The musicians appear between six images of buildings that signal their presence in an urban context. In contrast to some of his other more colorful works here the artist uses earth tones that seem to suggest muteness and flatness.

Courses on Art History can benefit from including Purvis Young in their lesson plans when engaging in debates about labels such as outsider, visionary, vernacular and folk art as well as how the western tradition of aesthetic thought has been challenged by artists with those labels. These topics require a discussion about such artists’ “disregard” for artistic rules, techniques, training, and traditions, which, in turn, offer a space to think about how race and class intersect and shape their choices, trajectories, and marginalization.

-       What does it mean for an artist to work with found objects instead of using oil and canvas?

-       Are there differences in style between a self-taught artist like Young and one with academic training? Describe why or why not.

Courses on contemporary U.S. history, American Studies or Sociology addressing issues such as urban renewal projects, the causes and consequences of urban poverty, the criminalization of black men or the growing problems of urban ghettos can add a touch of creativity to their lesson plans by using the piece in UMMA’s collection together with the story of Purvis Young.

-       How does Young’s artistic production illuminate the harsh realities of his racially segregated and impoverished neighborhood?

-       In what ways does Young’s life story provide a different dimension to examine, among other things, the sociocultural experiences and resilience of inner-city ghetto residents?

Sanders, Vicki. “Like Rembrandt, I’m Walking Among the People,” The Miami Herald, February 2, 1983.