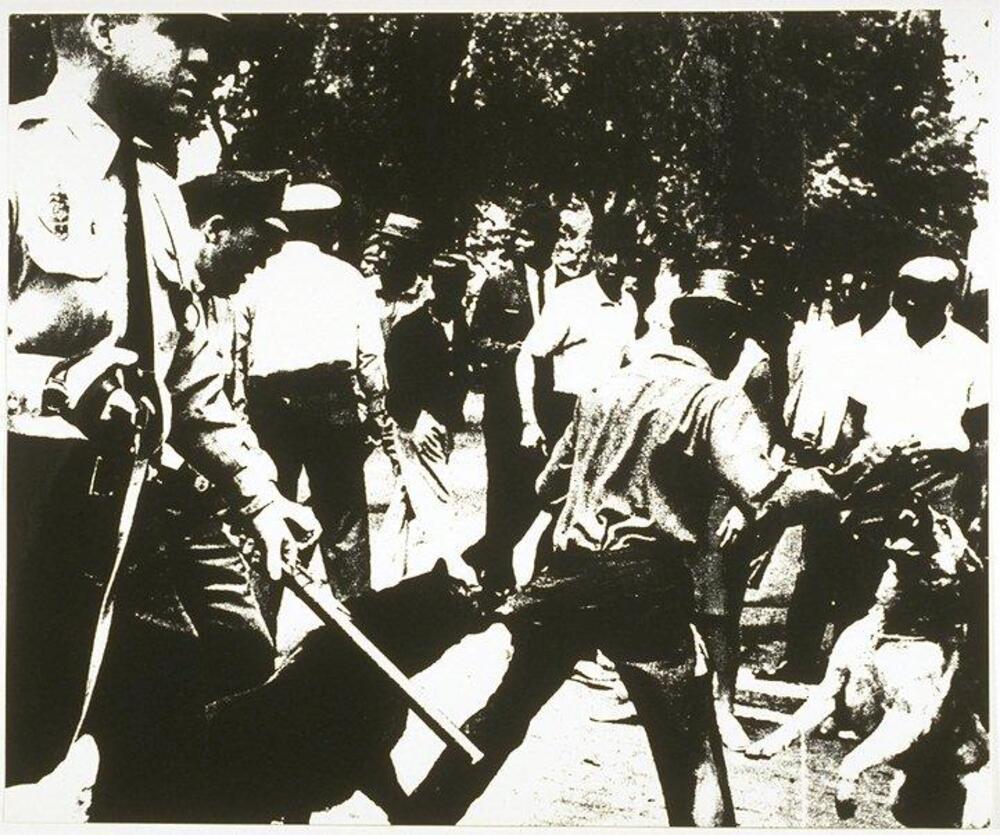 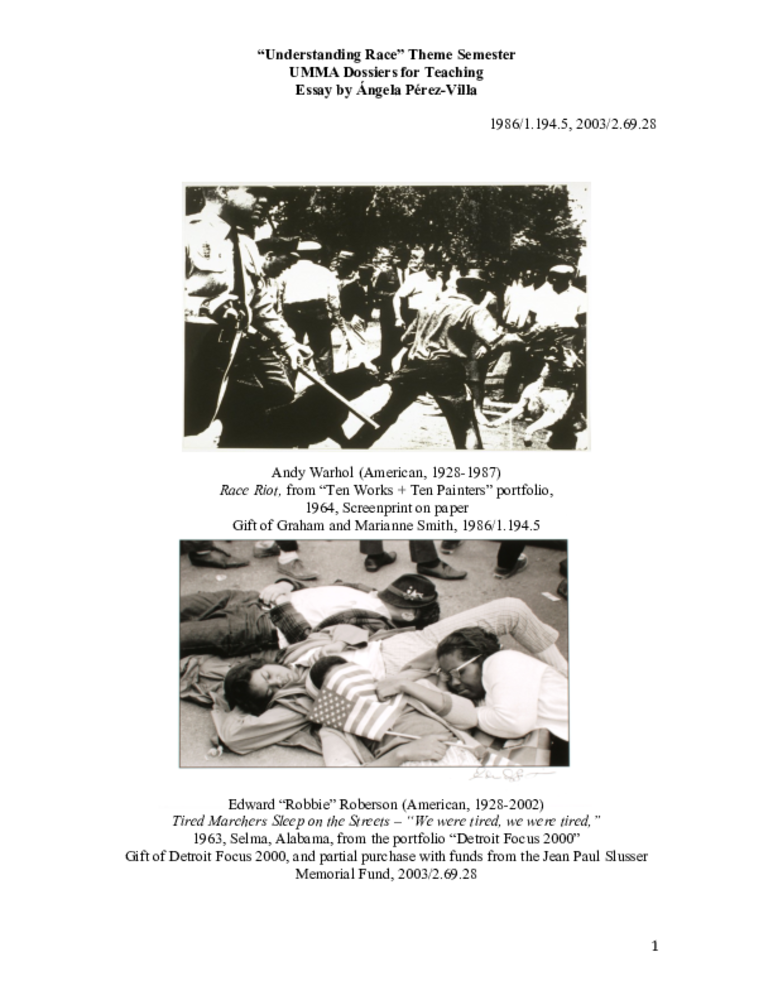 Andy Warhol was the son of working class European immigrants who settled in Pittsburgh, Pennsylvania where Warhol was born in 1928. Warhol moved to New York City after graduating with a Bachelor of Fine Arts degree in 1949. There, he pursued a career as a commercial artist and quickly became one of the most successful pop artists of his time. Warhol not only did prints and paintings. He also extended his talents into other fields such as film, publishing, writing, television and music. Although Warhol experimented with a variety of media and subject matter throughout his career, he never stopped utilizing elements of the mass media to capture particular moments in American history and culture.

Edward “Robbie” Roberson, a Detroit native, was a journalistic photographer who used his camera to capture the “soul and spirit” of black people in the U.S. At the age of 12, Roberson took a photograph of the body of Emmett Till, a black boy who was lynched in Mississippi for allegedly whistling at a white woman. This was the first professionally published photograph Roberson took for Jet Magazine, launching his career as a professional photographer. According to journalist Keith Owens, “from that point forward, Roberson knew in his heart that he had to chronicle the events of the civil rights movement.”[1] For many years, he photographed prominent black political figures such as Malcolm X and Martin Luther King, Jr. and covered three major civil rights marches led by Dr. King. Roberson generally published his photographs in black publications.

Warhol and Roberson had different life and artistic trajectories, but they shared a similar interest in documenting the U.S. Civil Rights Movement. Between 1955 and 1965, a growing number of young black people, many of them students, began organizing anti-segregation protests as well as massive efforts to register black voters throughout the South. These actions generated violent opposition among angry white individuals and public safety officials. In 1963, the latter attacked black demonstrators in Alabama with fire hoses and police dogs. The attacks during civil rights protests created images of brutality that were televised and published widely in the U.S. and around the world. Such images generated a greater sense of sympathy among new and old supporters, making the anti-segregation cause stronger. The artists’ take on those episodes of the Civil Rights Movement offers an interesting dimension to compare and analyze how some of their work spoke against the social and racial injustice of their time.

Warhol’s technical innovation of screenprinting directly onto a primed canvas became an important development in the history of art. Painting with mass-printing techniques and icons of pop culture questioned the boundaries of art and created a new and popular aesthetic. Warhol used this technique to make controversial statements about race-based social injustices in the U.S. during the 1960s. He transformed highly charged political images into works of art.  For example, Warhol’s Race Riot image was drawn from a newspaper photograph that depicted police dogs attacking civil rights demonstrators in Birmingham, Alabama in May 1963. Warhol’s recreation of the photograph as a silkscreen print increased the picture’s dramatic and emotional effect. As some have observed, “Race Riot’s flat screenprinting and enhanced contrast abstract the photographic image, heighten the distinction between black and white, and present a news item as a moment in history worth preserving.”[2]

Roberson’s documentary style photography was effective in narrating the stories that he cared about the most: those of the struggles of the black community. Even without elaborate equipment he was able to create memorable works of art. Roberson’s commitment to his work and community was honored in 2000 when some of the photographs from his collection were selected for the “It Happened in Detroit” Exhibition at the Detroit Public Library. Among the photographs exhibited was Tired Marchers Sleep on the Streets.

Race Riot shows a black and white print of a crowd of people outdoors, with trees in the background. On the left is a uniformed policeman holding a dog on a leash in one hand and a club in the other. In the center area there is a man, with his back to the viewer, whom two dogs are attacking. One, controlled by another policeman, is ripping his clothing and the other, with teeth bared, is attacking his right hand. In the crowd there are men watching the attack and looking at the policemen.

Tired Marchers is a black and white photograph showing a group of four people sleeping on the ground after participating in a civil rights march in 1963. One man and one woman cover their faces with a hat and an American flag, respectively. The other two women have their eyes closed. Around this group are the feet of people who are standing up.

-   Describe what you see in each photograph.

-   In what ways does the content of these photographs relate to, or differ from one another?

-   What message do you think each artist wanted to convey?

-   Roberson was a photojournalist who created images similar to those that Warhol appropriated or translated into a new art form. Discuss the function of each of these works in light of that information.

Owens, Keith A. “See it Like it Was: Detroiter Ed Roberson’s Photographs Capture a Lifetime of Black History” http://www2.metrotimes.com/arts/story.asp?id=881 (Accessed June 26, 2012)

[1] Owens, Keith A. “See it Like it Was: Detroiter Ed Roberson’s Photographs Capture a Lifetime of Black History” http://www2.metrotimes.com/arts/story.asp?id=881 (Accessed June 26, 2012) 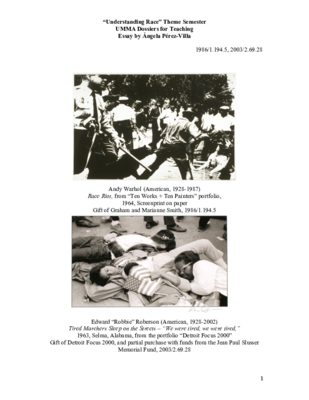