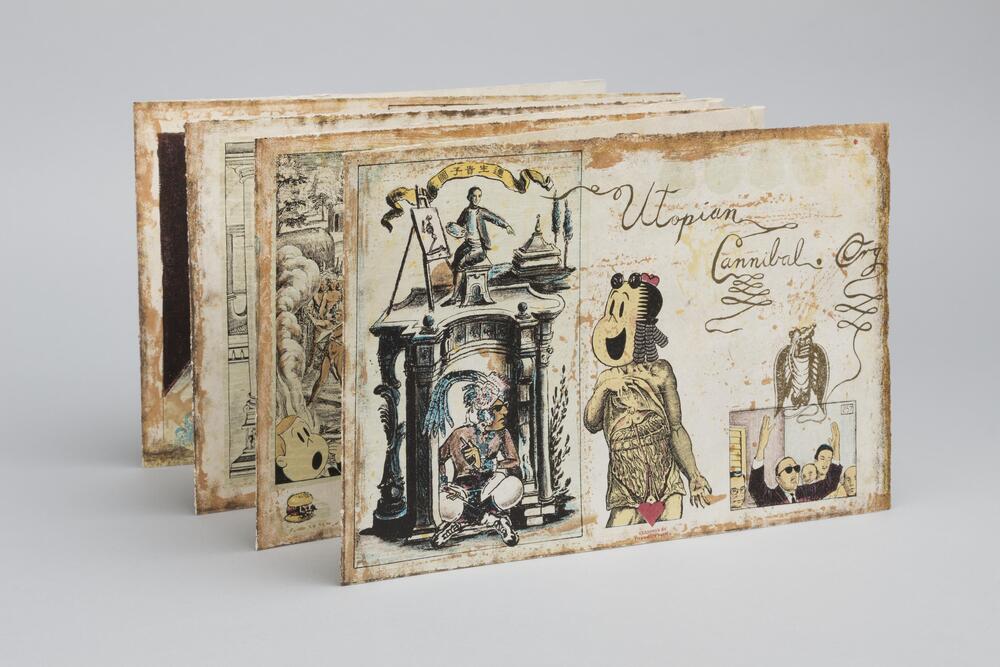 Enrique Chagoya emigrated from Mexico to the United States in 1977, becoming part of a generation of artists who emerged in Southern California’s burgeoning art scene. Chagoya’s experiences living on each side of the U.S.-Mexican border have influenced his political views and historical perceptions, all of which he has channeled through his artistic work. Two dominant concepts that define Chagoya’s work are social satire and “reverse anthropology,” the term he uses for revisualizing the histories written by the dominant cultures. The social satire work includes large-scale charcoal drawings about U.S. imperialism in Central America during the Ronald Reagan era and most recently about world politics under the administration of George W. Bush. One of his most notable drawings is When Paradise Arrived (1989), where a giant cartoon gloved hand representing U.S. power is about to flick away a small, ecstatic, presumably Latin American child. Robin Légere Henderson has noted “the piece comments directly and forcefully on the colonization of America and the continuing presence of state terrorism, and its disguises.”[1] His reverse anthropology, on the other hand, is in the form of codices—accordion-folded books made on bark-based paper used by Mesoamericans before the Spanish conquest. Among his codices is UtopianCannibal.Org (2000), an eight-page codex that shows Chagoya’s commitment to destabilizing dominant historical accounts that obscure the stories and the cultures of the defeated.

A master printmaker, Chagoya likes to exploit the medium’s historical connections to mass-produced political propaganda as well as its ability to broadly spread his own messages and stories.[2] Through the concept of reversed anthropology, Chagoya appropriates material from a wide range of art historical, political, and pop culture sources and positions them alongside traditional and religious images of his native Mexico. The result is a highly personal kaleidoscope of imagery that allows Chagoya to recraft histories. His codices are generally two-sided, accordion-fold, viewed from right to left as a way to honor Mesoamerican practice. The preservation of ancestral traditions in Chagoya’s codices also becomes evident in his use of amate paper, a handmade bark-based paper from a fig tree species dried on planks in the sun. According to art critic Sarah Kirk Hanley, “printing on amate is exceedingly difficult as it ‘stretches as much as 1/4 to 5/8 inches’ when put through the press multiple times; Chagoya’s layered images usually require eight to ten passes.”[3]

UtopianCannibal.Org is a codex with eight panels paginated with the Mayan numerical system of dots and dashes generally in the upper right corner that reads from right to left.

The opening page shows the American comic book character Little Lulu at the center, facing an artist sitting at the top of a structure who points to her with his hand and whose painting is a praying skeleton on its knees. Below the artist sits a “modern” Indian warrior wearing sunglasses, shoes, and holding a cell phone in his hand. Little Lulu smiles and pulls up her shirt, showing her lower abdomen. The shape of a heart covers her intimate part with the following caption below it: “Censored by the brain police.”

On page two, there is a print of a one-dollar bill whose face of George Washington is substituted for that of an African man with extreme lip gages. Below the bill are images of full sacks, gold coins and jewelry lined up in rows. Next to these rows is an image of an European colonizer apparently burning a group of chained Indians. At the right of the panel, there is a small panda bear figure and a caption that reads “general merchandise.”

On page three, there is an image that depicts three groups of Indians in a village. The group on the right is gathered around a dismembered white body lying face down on the ground. Two Indians are voraciously eating body parts as the others watch an Indian man cutting the body with a knife. The other two groups are apparently attempting to kill two white men wearing black suits and ties. One of the white men appears actively resisting. The face of Toby, a character in the American comic strip “Little Lulu,” appears at the bottom left of the frame. His eyes and his mouth are wide open as he observes the cannibalistic scene. On the right side of this image, we find a chunk of raw meat, a cartoon-like male figure pointing at the viewer with his finger, and a comic strip box with a female angel that states, in Spanish, that “a mas de ser valiente y poderoso que extraordinaria belleza la de este hombre” (Aside from being courageous and powerful, this is a man of extraordinary beauty.)

Below the comic strip the faces of Mao Zedong and Fidel Castro are attached to the bodies of a dog and a mouse respectively. They watch attentively as a deformed body with George Washington’s head goes through and exits a big meat grinder. At the bottom right of the panel is a comic strip box with a woman holding a pistol and declaring in Spanish “Aquí esta! Sabia que tenia que haber armas” (Here it is! I knew there would be guns.)

Page five shows a bearded peasant man positioned at the far left of an upside down architectural drawing of a Renaissance building. He is blinking an eye and wearing a traditional Mexican sombrero (hat.) The corner columns of the structure seem to act as a frame that simultaneously displays and traps the figure of the man. Outside this frame, at the bottom right of the panel, stands the figure of a renaissance woman with plastic google eyes.

On page seven, a white Barbie doll-looking figure rests in bed as a well-dressed, smiling Sambo holds an Asian-looking newborn on one hand and a blonde baby boy on the other who resembles James Dean or Ken. Standing next to him are two children clinging to his pants – a boy with a beard and a Mexican hat and a dark-skinned girl with a bandana and a fruit basket on her head. This rainbow of stereotypes is discreetly contrasted with a small stamp at the bottom left corner that shows European-looking faces of children and an adult woman. The opened book at the center-top of the panel illustrates two border patrolmen looking through their binoculars. The text suggests they are at the El Paso border crossing.

On page eight, the image of a pressurized reactor is positioned on top of the medical illustration of a man whose left cheek, neck, chest, and arm are skinless, revealing muscle and bone. Next to this figure hangs a yellow banner with the words: “More Art Faster.” A praying skeleton, similar to the one on page one, kneels down and faces the viewer. On top of it is a skull with the caption “Fin” (The End.)

In an anthropology class, students may engage with Chagoya’s work by asking:

·      In what ways does his piece alter and/or contribute to a discussion about the mentalities of colonization, more specifically about the relation between savagery and civilization?

·      How does Chagoya’s “reversed anthropology” come across in this piece? Is it effective? Why or why not?

·      How does his visual representation of an alternative historical account reverses a dominant world order? If that is the intention, what kind of world order does it promote?

In a class of Latin American history, study Enrique Chagoya’s piece together with Miguel León-Portilla’s The Broken Spears: The Aztec Account of the Conquest of Mexico and consider the following:

·      How do the visual artist and the scholar attempt to highlight and preserve the historical viewpoints of the vanquished instead of the victors?

·      What are the strengths and weaknesses of each approach?

·      What do you think about Chagoya’s view of history as an ideological construct?

·      In what ways can Chagoya’s piece relate or add to scholarly and literary debates about the problem of persistence in Latin American history?

In an American Culture class (i.e. Latinos in the United States), Enrique Chagoya’s piece may be useful in discussions about cultural hegemony, ethnic stereotypes, globalization, and cross-cultural identities. For example:

·      Describe some of the ethnic stereotypes and/or misconceptions Chagoya addresses in the piece.

·      How does the artist convey the idea of racial mixing in historical contexts of violence and conflict?

·      What are the meanings behind Chagoya’s appropriation of icons of American popular culture and pre-Columbian cultural objects? What does the juxtaposition of elements that have no apparent association say about hegemonic structures of power?

·      What do we learn about Chagoya’s own cultural hybridity as a Mexican-born American through an analysis of his work? How might it relate to the work and experiences of Chicanos such as Gloria Anzaldúa and Emma Pérez[4]?

[2] For more information about the history of art in political and social movements, see Colin Moore, Propaganda Prints: A History of Art in the Service of Social and Political Change (London: A&C Black, 2010).

[4] See Gloria Anzaldúa and Cherríe Moraga, eds., This Bridge Called My Back: Writings by Radical Women