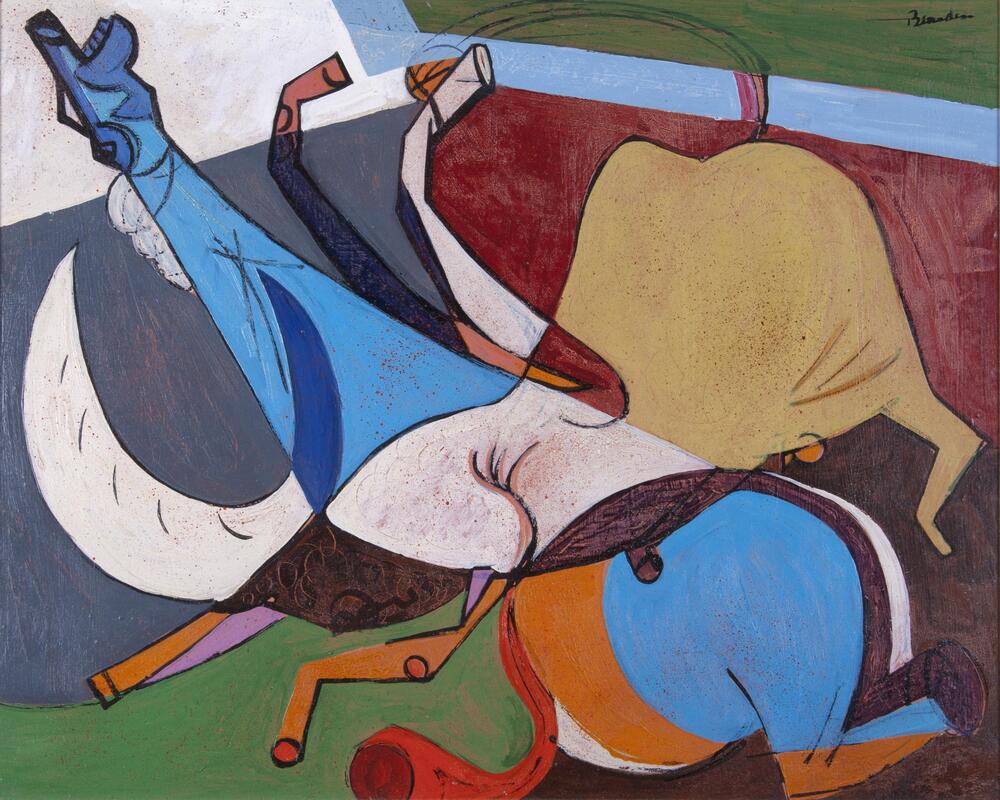 Romare Bearden was an African-American artist who belonged to a well-educated and economically successful black family from the South. In 1914, Bearden and his parents moved from North Carolina to New York City, a place where his interests in the study of art, intellectual curiosity and talent would all coalesce by the time he entered adulthood. In Harlem, the vibrant community of artists that surrounded Bearden influenced his artistic views and style. Bearden was like a sponge, soaking up ideas about art from many sources. His relationships with other young black artists inspired Bearden to engage not only with masters of Western European art such as Pablo Picasso, but also with different expressions of African art and the work of his contemporaries in the United States. In addition, Bearden enriched his artistic work through his analytical reading and critical writing about the social dynamics that shaped the black artistic community in the United States.

Between the 1940s and 1960s, Bearden bluntly opposed the “negro artist” label through his writing because, in his view, it inextricably linked art with racial identity, limiting artistic creativity and exposure.[1] In a context in which legal racial segregation condemned African-Americans to unequal social conditions, Bearden claimed it was not “necessary that the Negro artist mirror the misery of his people.”[2] In this way, Bearden rejected protest art and favored the idea that “art celebrates a victory,” an idea that guided his him even as he search for ways to artistically contribute to the Civil Rights Movement in the mid 1960s. Bearden developed a unique collage technique that placed black people and culture at the center of his creations. Black people’s depictions, Bearden said, did not represent protest images. In the words of Sharon F. Patton, Bearden’s collages “attempted not only to create an autobiography, and historical narrative about black life, but also to show the humanity of black people.”[3]

By the late 1960s, his photomontages of disparate human subjects in urban and rural settings received critical praise. Bearden’s collages often combined flat areas of color with patterned areas cut from photographic magazine illustrations. The personal and culturally specific content of his collages was grounded in the social realism of the 1930s and 1940s while the design owed to the abstract art of the 1950s.[4] In describing Bearden’s collage style and technique, art critics have often agreed on the jazz-like rhythm—Bearden was a jazz devotee—each piece creates for the viewer through the juxtaposition of figures of all sizes and the narratives they present. One critic observed that Bearden’s “creative response to things that ‘happened’ as an artwork unfolded in time constituted an explicit parallel to the kind of improvisation that drives a jazz performance.”[5] Bearden was also known for his work in a wide array of media that included watercolor, drawing, monotype, and edition prints. His prints have received particular attention in the last few years as more contemporary artists and scholars have shown interest in understanding how Bearden extended his artistic imagination beyond the collage and experimented with the print medium.

For example, the images in three of the sections seem to be directly related to the themes covered in the magazine issue. One juxtaposes the image of a gas-drilling rig to one of a construction site, which resonates with the magazine’s analysis that construction and oil related enterprises were beginning to make the top ten list of black-owned businesses.

Similarly, a group of black men dressed in business attire are shown having a job meeting against the background of a five-dollar bill. This seems to illustrate a key theme in at least two of the magazine’s articles about the viability of minority enterprise by strengthening the training of black employees and agents working at black-owned banks and life insurance companies – institutions that had historically performed important economic and social functions for the black community.

On the right side of the rectangle is a globe that intersects the rectangle perhaps suggesting the connection between different black enterprises and the international sphere. Even though none of the magazine articles mentioned the arts and music industry, Bearden included an image of black jazz musicians juxtaposed with one of a sound recording studio.

Show students the digital image of Romare Bearden’s Black Enterprise and ask them the following questions:

After discussing these questions, show students Bearden’s print as it appeared on the Black Enterprise magazine cover and ask:

2. In Women’s Studies and other classes that touch on issues of women, race, and/or art in the U.S., students can be encouraged to look and interpret Bearden’s print and magazine cover through a gender perspective by asking:

Use other works by Bearden that portray black female faces and bodies for contrast. This could generate discussions around issues of racial/physical representations of men and women, masculinity, and sensuality. Some examples are: Patchwork Quilt (1970), The Intimacy of Water (1973), Mamie Cole’s Living Room (1978), Artist with Painting and Model (1981).

3. Bearden lived and produced his art through periods of significant social and political upheaval in the U.S. Students can compare his art from the Harlem Renaissance (a period of creativity and solidarity) with his work from the 1960s (a period of social conflict.) In what ways does Bearden’s art evolves in these historical periods?

4. In classes about contemporary American history and culture, students can discuss this illustration in the specific economic context of the U.S. in the late 1970s.

5. K-12 TEACHERS: Visit The National Gallery for a biography of, literary sources for, method used, and lesson plans about Romare Bearden.