The Four Avenging Angels from the 'Apocalypse' 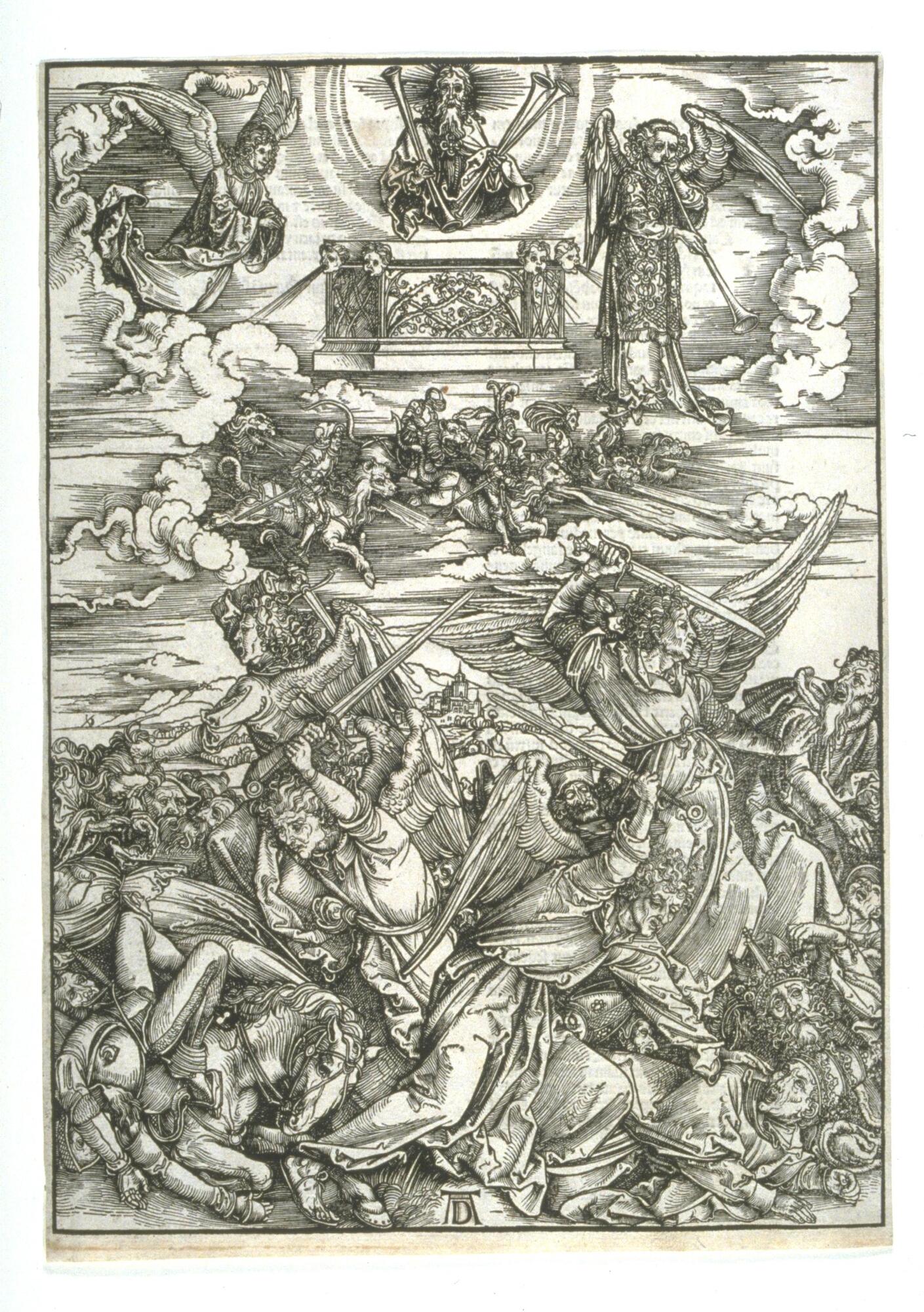 Title
The Four Avenging Angels from the 'Apocalypse'

Label copy
Gallery Rotation Fall 2010:
Albrecht Dürer
Germany, 1471–1528
The Four Avenging Angels, from The Apocalypse series
1496–98
Latin edition, 1511
Woodcut on laid paper
Gift of the Friends of the Museum of Art in honor of Bret Waller, 1980/1.214
The approach of 1500 fanned the fears of impending apocalypse. Responding to these fears, Dürer created this nightmarish vision of violence as part of an ambitious set of fifteen illustrations for the biblical Book of Revelation,
in which St. John recorded his visions of the end of time.
In the print, God, stationed above, orders an angel to blow the sixth trumpet, which unleashes four savage angels “bound under the great river Euphrates.” Their squadrons gallop from the sky on lion-headed steeds that spew fire, smoke, and sulfur, while the four sword-wielding angels, who slaughter a third of humanity, appear below.

Subject matter
This print is one of 15 woodcuts by Dürer that depicted scenes of the Apocalypse as described by John the Apostle in the Book of Revelations of the New Testament in the Bible (Revelations 9:13-21). Here, following the sounding of the sixth trumpet, four angels were released to kill a third of mankind. Dürer has followed the wording of the text closely, including the four-cornered altar, the trumpeting angel and the horse and riders in the upper (heavenly) section of the work. But, it is in the earthly realm, in the lower section, that he dramatically portrays the death and destruction of mankind described by John. Four warrior angels stand, swinging their swords, amidst dead and fallen figures of men with looks of horror as they are slain.

Physical Description
This woodcut print is vertically oriented. The upper half of the piece is celestial with an angel standing on a cloud blowing a trumpet. Men on fire-breathing beasts exit from the clouds. At the very top center, a white-bearded figure, shown from the torso to the head, holds four trumpets. Rays emanate from his head to form a halo, and he is framed in a half circle. Directly below him is an altar with vines on the sides and four child-faces spitting water out. The upper right corner features an angel blowing a trumpet and the upper left features a smiling angel with hands clasped in prayer. The lower half of the print is terrestrial and depicts a chaotic battle scene. Four angels with wings and swords attack a crowd of men, including a pope, a bishop and a king, as well as commoners. These figures are all crowded into the foreground with contorted postures. There is a city on a hill visible in the distance. The center bottom has Dürer’s signature of letter "D" contained within a letter "A".