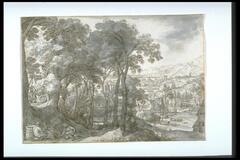 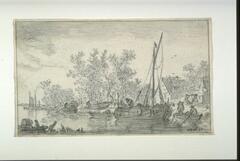 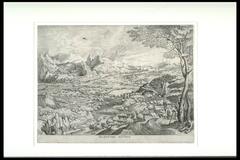 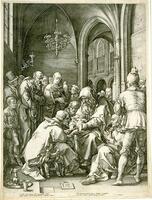 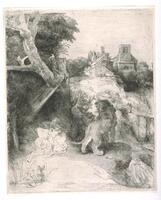 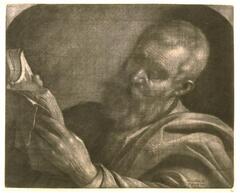 Oceanus (from a Series of 6 Mythological Figures)

Title
Oceanus (from a Series of 6 Mythological Figures)

Label copy
Gallery Rotation Spring/Summer 2012
Hendrick Goltzius
Netherlands, 1558–1617
Oceanus, from a Series of Six Mythological Figures
circa 1589–90
Chiaroscuro woodcut
Museum purchase, 1960/2.36
Goltzius, like Dürer, traveled to Italy, and became the first artist in the Netherlands to depict many subjects from classical mythology. Here his subject is the Titan Oceanus. In ancient myth the Titans were the children of Earth and Heaven, which sprang from Chaos. They were referred to as the elder gods, whose ruling power was transferred to their children, the Olympians. Oceanus fathered the river-gods and the sea nymphs known as the Oceanids. According to Homer, Oceanus was the personification of the river that surrounded the earth, connecting, through a subterranean passage, all other rivers. Goltzius represents Oceanus as a benign old deity with a flowing beard, surrounded by Oceanids. Originally this woodcut was paired with a print of the Titan Tethys, his sister
and wife.

Subject matter
Inspired by Ovid's Metamorphoses, this print depicts the god Oceanus riding a sea monster. The image of the deity was paired with a print of his wife, Tethys, as part of a series of six chiaroscuro woodcuts depicting mythological figures.

Physical Description
A powerfully muscled nude man sits astride a fearsome sea creature. He grasps an oar in his left hand and the beast's reins in his right, while a cloth billows out behind him. A variety of humanoid creatures frolic in the seascape in the background.