Calendar Leaf (January) from a Book of Hours 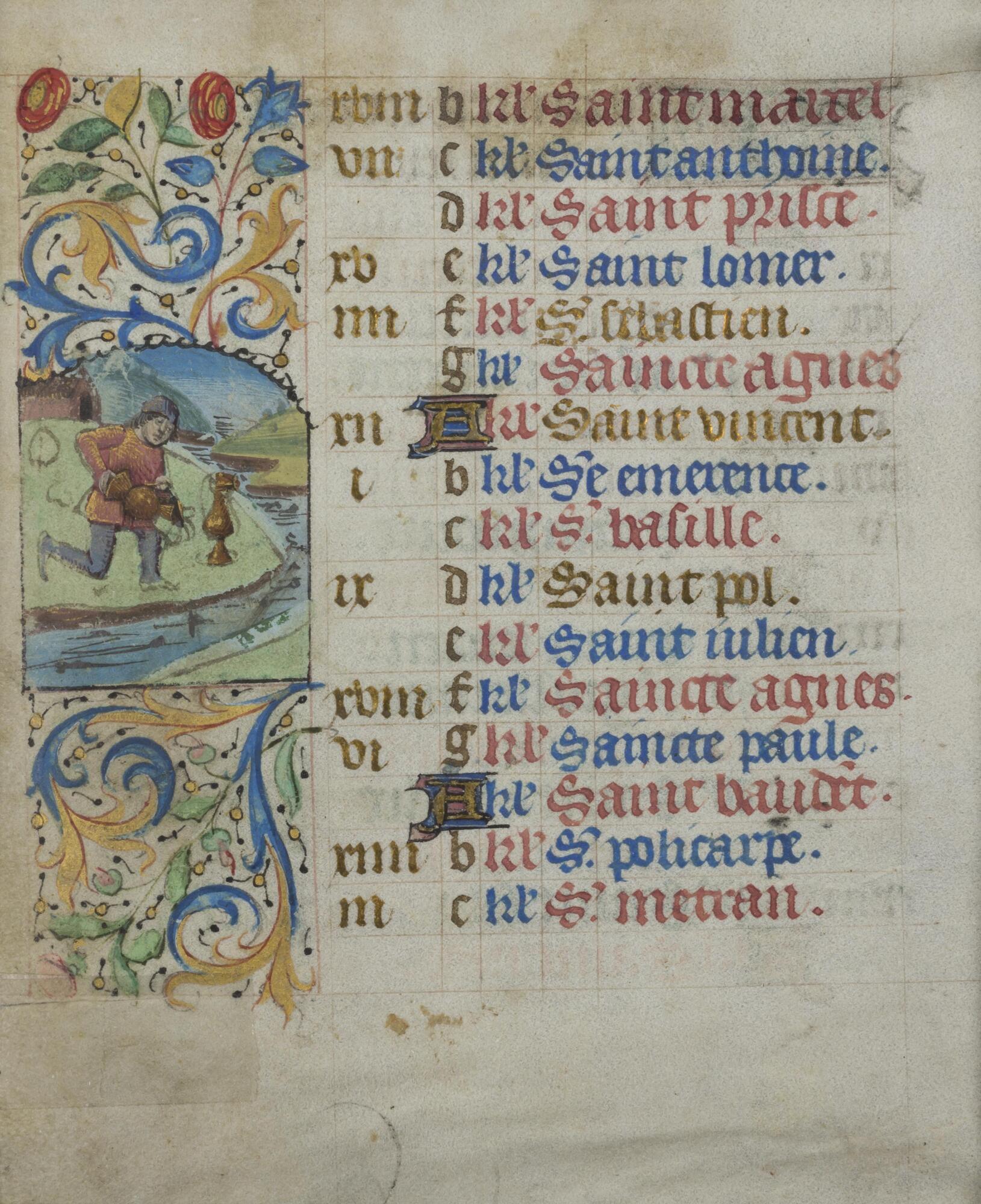 Title
Calendar Leaf (January) from a Book of Hours

Subject matter
This double-sided leaf features the calendar month of January—written in gold—with a list of saint feast days. Important saints are emphasized in gold or red rubrication to indicate hierarchy and correspond to the patron. The illustration on the recto is meant to represent the labor of the month, feasting. Fittingly, a man is shown feasting with jugs of libations behind him. The illustration on the verso of a man drawing water symbolizes January’s zodiac sign of Aquarius. Many saints featured in this calendar are French, including those emphasized in red or gold ink, indicating that the manuscript was produced for a French patron,most likely from Paris because of the gold lettering of Saint Genevieve on January 3rd , the patron saint of Paris whose relics are housed in Saint Etienne du Mont. Blackletter was one of the most commonly used scripts in western Europe during the medieval period. Textura, a form of blackletter, was popular in the Netherlands, Germany, and France, and is likely the script seen in this manuscript.

Physical Description
A double-sided illuminated manuscript leaf with three columns of text in gold leaf, red, and blue French blackletter script encased by a floriated border. There are two small miniatures, one on either side of the leaf, framed in arched compartments.

The illustrated compartment on the recto features a seated man wearing a long blue tunic and red cap seated at a table in an interior marked by a stone fireplace. A smaller servant boy dressed in a long tunic presents the man with a platter. The compartment on the verso contains a landscape with a winding river where a man kneels, dressed in pants and a tunic shirt, and draws water into copper jugs.

Rights
If you are interested in using an image for a publication, please visit http://umma.umich.edu/request-image for more information and to fill out the online Image Rights and Reproductions Request Form. Keywords
Medieval (European)
historiated initials
illuminations (visual works)
manuscripts (documents)
text (layout feature)