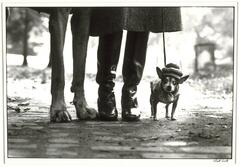 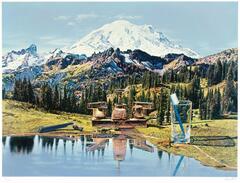 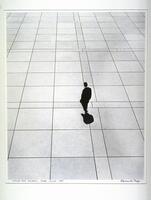 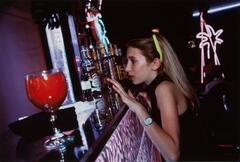 Label copy
Keith Haring was a graffiti artist whose career went from New York subways to upscale galleries and international museums. Seeing his art as "performance," Haring worked quickly on blank advertisement panels in subway stations beginning in 1978 shortly after his arrival in New York as a student. Applying chalk to black paper, these drawings became a sensation and people began collecting them immediately. Soon he was picked up by Tony Shafrazi Gallery and began making art in more permanent materials. To counteract the "industry" of the gallery scene, Haring opened his "Pop Shop" in 1986 to make his work available to the masses. In 1988, he was diagnosed with AIDS and was one of the first artists to be very public about his disease.
Haring’s Marilyn Monroe appropriates a pre-existing poster of this popular icon. He has altered it, however, by applying in sumi ink a series of marks over her face, chest, and shoulders. This appropriation looks back to the Dada artists and their successors from earlier in the century. The use of Marilyn, of course, also calls to mind the use of this same sex symbol by Andy Warhol some twenty years earlier. Unlike Warhol, however, Haring’s Marilyn looks more like someone afflicted with a skin disease, perhaps something like Karposi’s sarcoma, a rare cancer associated with full-blown AIDS which causes purple or brown lesions on the skin or mouth.
Sean Ulmer, "A Matter of Degree" 11/2001

Subject matter
Bust-length poster of Marilyn Monroe over which Haring has applied sumi ink outlining the features of the form and making a series of marks over her face, neck and chest

Physical Description
Bust-length portrait of Marilyn Monroe positioned in front of a red background; Haring used a poster of the actress onto which he applied sumi ink in a series of outlines, marks and drips over the face, neck, chest and shoulders.