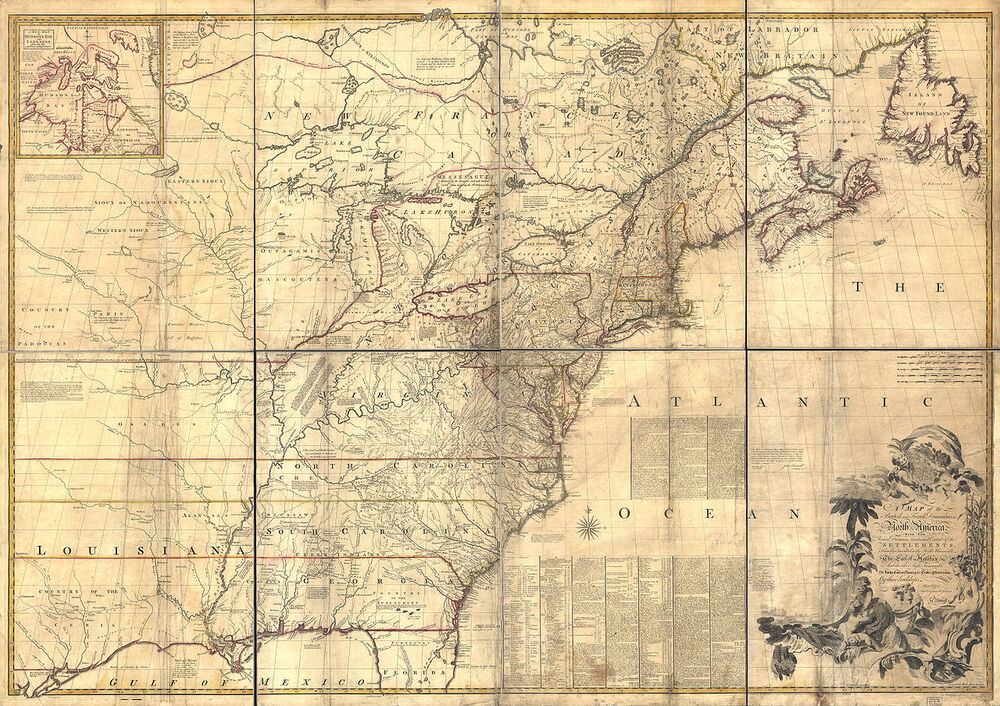 John Mitchell, his Political Vision, and his Map

The size of the Mitchell Map -- about 6½ feet wide by 4½ feet high -- and its great detail might lead the reader to think that its maker was an accomplished map-maker. However John Mitchell had no prior mapping experience. Born in Lancaster County, Virginia, in 1711, Mitchell studied medicine at the University of Edinburgh, Scotland. Practicing medicine back in Virginia, he spent his spare time examining the local flora. A serious illness forced him to return to England in 1746. Once recovered, his interests increasingly turned to publicizing the French threat to the British colonies.

By 1746, North America was a stage set for an imperial struggle. The British and the French both claimed substantial areas of the lands east of the Mississippi and north of Spanish Florida. The Treaty of Utrecht (1713-14) had brought an end to a global war between the two powers, whose colonial campaigns are known as Queen Anne's War. A significant portion of the treaty had clarified and defined the boundaries between the territories claimed by the two nations in North America. Thirty-five years later, however, British colonists were increasingly convinced that the treaty had failed: the French were encroaching on British territory.

It was in this context that Mitchell made his map. His purpose was to present to the British public an image of all of the colonies so that the true scale and extent of the French threat could be exposed. He completed his first draft in 1750. Because it was based only on the publicly available sources of information, this first map was rather crude, even in Mitchell's own opinion. But word of Mitchell's work spread through elite London society. The Board of Trade and Plantations, the government agency with responsibility for the colonies, retained Mitchell to make a new map using the official maps and reports in the Board's possession. The Board also sent instructions to the colonial governors requiring them to send detailed maps and boundary information back to London for Mitchell's use.

Andrew Millar published Mitchell's map in 1755, the year before war broke out with the French. In addition to the geographical outline of the continent and the European colonies, Mitchell also included many textual legends describing the extent of British and French settlements. Mitchell always gave the benefit of any doubt to the British claims. He also submitted a report to the Board in 1752, listing the French encroachments and suggesting new strategies to encourage British settlement between the Appalachians and the Mississippi in order to counteract the growing French influence. Mitchell is usually credited with authorship of an anonymous tract published in London, The Contest in America Between Great Britain and France by an Impartial Hand (1756), which again voiced concern with French expansion.

The first edition of the map was entitled A Map of the British and French Dominions in North America ..., and bore the copyright date of February 13th, 1755. Shortly thereafter, Mitchell produced a second edition, probably in 1757. In addition to a few changes in geographical detail, this edition had two large blocks of text added in the middle of the Atlantic. The text is Mitchell's own account both of his data sources and of how he compiled the numerous provincial maps into the bigger frame of North America. After Mitchell's death in 1768, the printing plates were acquired by the cartographic publishers, "Jefferys and Faden." Some geographic details were updated and a third edition was printed in 1773-74. Finally, in 1775, Faden published a fourth edition under a new title that reflected the British defeat of the French and the annexation of Québec: A Map of the British Colonies in North America ....

An Irony of Empire: Mitchell's Map and the Treaty of Paris

When British and American negotiators met in Paris in 1782 to draft a peace treaty to end the Revolutionary War, an issue of central importance was clearly that of the boundaries of the fledgling United States. There were three major configurations of the boundary lines proposed by either side; the third, proposed by the British negotiator Richard Oswald, was accepted by both sides in November 1782 and was written into the final treaty of September 3rd, 1783. Thus, Maine's eastern boundary was defined "by a line to be drawn along the middle of the river St. Croix, from its mouth ... to its source, and from its source directly north to the ... Highlands, which divide the rivers that fall into the Atlantic Ocean from those which fall into the river St. Lawrence." Despite the importance of the issue, no map of the boundaries was attached to the treaty. Without graphic explication, the textual definition was wide open to interpretation. In the case of Maine's eastern boundary, the British and Americans would soon disagree as to what river is actually the St. Croix.

A map was however used in the actual negotiations to trace out the boundaries: Mitchell's Map. It is ironic that a map intended to proclaim the British control of North America was used in the dismemberment of British colonial power.

John Jay, on the American delegation, used a third edition of the map. His map, today in the New York Historical Society, marks his understanding of the boundary. For example, Jay had the eastern Maine border running along the St. John river, well inside modern New Brunswick.

Oswald and the British used a copy of the fourth edition of Mitchell's map. The British arguments as to the proper boundary for the United States were rooted in the territorial limits established by earlier treaties between Great Britain and France. Oswald marked all of these limits onto his map: Nova Scotia, British fishing limit, and conflicting British and French interpretations of the interior boundaries, all by the Treaty of Utrecht; the boundaries of the Hudson's Bay Company; the boundaries of Québec defined in 1763 and 1774; and, the 1763 Proclamation Line that separated British settlement from the Indian Lands. To these he also added a thin red line, in ink rather than watercolor, for the British interpretation of the new U.S. boundary. After the treaty was concluded, Oswald gave this map to King George III; it is now in the British Library. The king himself labeled the red line in ten places as "Boundary as described by Mr. Oswald." For this reason, this map is usually referred to as the "red line" map. This map is thus a statement of the British vision of North American territories.

Note: The content of this web document has been significantly updated, corrected, and expanded by two publications: