Collection Object
Together We Win 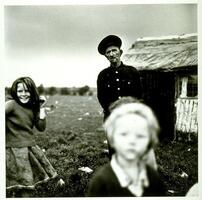 Subject matter
This photograph shows a group of children and a man standing in a field below an overcast sky.  A smiling girl in a dirty sweater and skirt darts into the frame from the left. The man standing in the center right looks exhausted and weary. The work’s title lists him as a chimney sweep, and he appears to be wearing his buttoned dark uniform and cap, his face blackened with the soot of his occupation. In stark contrast to the ashen face of the man, the gleaming white face of a little girl stands directly in front of him. Unlike the figures behind her, she is not in focus, an effect that causes her to feel almost removed from the picture. Her blurred face stares expressionlessly into the camera’s lens, her presence appearing almost apparition-like. The individuals in this photograph belong to a small ethnic minority in Ireland known as Travellers, a nomadic community of people that move from site to site, assembling makeshift caravans and camps. This photograph was taken at their camp in an area known as Cherry Orchard. Behind the figures there stands a hut which appears to have been pieced together from various scrap materials. Sprinkled throughout the field are flecks of trash and debris.

Physical Description
This photograph depicts a uniformed man and a group of children standing in a field, a makeshift hut behind them.