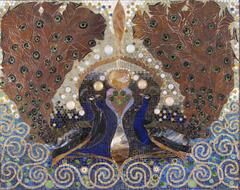 Label copy
March 28, 2009
This mosaic employing one of Tiffany’s signature motifs—the peacock—was the centerpiece of the foyer to the Havemeyer’s opulent house; it was placed over the large fireplace that dominated the room. Tiffany has used a wide variety of glass types in this mosaic—translucent, opaque, cabochon, and gem-cut glass among them—making it a true technical tour de force. Some portions, such as the scrolling vine motif along the bottom of the mosaic (which is repeated in the palmette mosaic frieze) are flat, two-dimensional decorative passages. Other parts are richly descriptive of three-dimensional form, such as the crimped and folded glass that comprises the bodies of the peacocks, who face each other in heraldic fashion with magnificent spreading tails. Tiffany devised a creative means of depicting the tail feathers: clear, rippled glass with an iridescent surface has copper foil behind it, providing a characteristic reflective luster.

Subject matter
This mosaic, which was located in the entrance hall of the Havemeyer house, is a tour de force of mosaic composition. Tiffany plays with the tensions of two and three dimensions in this work. The overall design is one of profuse linear richness mirrored on either side of a central vertical axis, much as you would find in a heraldic arrangement of animals in a coat-of-arms. However, against the insistent flat and curvilinear patterns erupt three-dimensional pieces of glass (domed and carbachon) that break the two-dimensional plane of the work. In addition, the bodies of the peacocks are composed of wavy, three-dimensional glass that evoke the mass of the birds' bodies. The richness of coloration and complexity of glass patterns and motifs in this mosaic demonstrate Tiffany's skills at their height.

Physical Description
Two male peacocks in profile face one another at the center. The work has a strong vertical axis, accented by several larger domed and carbochon glass elements. The peacocks stand upon a curling vine-like design of tan tesserae upon a deep blue field of tesserae interspersed with round malachite-colored pieces of glass. The areas behind the peacocks consists of round white and hexagonal tesserae that move from deep blue to a pale tan/green color. At the central vertical axis are several abstract pieces of opaque brown, orange and blue glass.