Henry Osborne Havemeyer was born in New York in 1847. Immensely wealthy, he made his fortune in sugar refining. Called the “Sugar King,” Havemeyer had a reputation for questionable business practices.

In 1883, Havemeyer married Louisine Elder, the niece of his first wife, Mary Louise Elder. Art collecting was extremely popular among the wealthy elite, and many private residences, like the Havemeyer House, housed world-class private collections. The Havemeyers would acquire thousands of art objects ranging from Tiffany glassworks to canvasses by El Greco and Degas, as well as an extensive Impressionist collection. Louisine’s aesthetic was influenced by western art, while Henry was more inclined toward eastern pieces. Their collection was world renowned.

By 1888, the Havemeyer collection began to outgrow the family’s 36th street home in downtown New York.  In 1889 they purchased property on Fifth Avenue at 66th Street. The house was designed by architect Charles Coolidge Haight and decorated by artists Louis Comfort Tiffany and Samuel Colman. The construction and decoration of the house would take place between 1889 and 1891 and the end result was nothing less than spectacular.

Built in the popular Romanesque Revival style, the Havemeyer home was quite grand. While the outside of the building remained relatively unadorned and somber, its interior glittered and sparkled. The building was itself a work of art.

The interior was designed by Tiffany himself. Tiffany was inspired by several different art movements. As a member of the Aesthetic movement, which preached “art for art’s sake,” Tiffany was interested in making the world around him beautiful. He was also closely associated with Art Nouveau, the highly ornate and decorative art movement that was popular at the time. And like the Impressionists, Tiffany used light as a design element.

In the Victorian home, the hall served a ceremonial and social function. Paved with more than one million Hispano-Moresque tiles, the entrance hall accentuated the magnificent height and grandeur of the space. The doors (Figure 1) acted as a transitional space from the exterior to the interior. The outside of the doors feature a different glass inlay than the interior, further emphasizing the change in space.

At the center of the entryway stood a large fireplace fronted by an ornate screen (Figure 2). Above the fireplace was a magnificently colorful, Islamic-style mosaic frieze made of many individual panels (Figure 3), at the center of which was the regal peacock mosaic (Figure 4). The peacock is one of Tiffany’s most famous motifs. Most of the tiles are smooth, but interspersed are rounded tiles. There is a tension between flat and three dimensional surfaces.

The library was another important space in the Havemeyer home. It was known as the “Rembrandt Room” because it held Dutch paintings. Several motifs recur throughout the room. Celtic motifs appear in the covered frieze, the carved details of wooden furniture, upholstery embroidery, and the ironwork of the chandelier (Figure 5). The mantel, moldings, and other woodwork feature ornate scrollwork. The grand ceiling was decorated in brocaded fabrics pieced together such that it looked like a mosaic.

One of the most famous features of the house was the “flying” staircase. It was hung from the ceiling of the picture gallery by cables disguised in shimmering glass ornaments. Flanked by railings made of gold-plated S-scrolls, the balustrade (Figure 6) is fantastical. Hardly an inch of the house was left untouched by Tiffany’s hand; the stained-glass window in the dining room (Figure 7) featured a white and amber glass and swooping, arabesque designs.

Although a few alterations were made over the years, the mansion remained true to its original design until Louisine’s death in 1929; the house was demolished soon after. The Havemeyer children gave the majority of the collection (1,967 pieces in all) to the Metropolitan Museum of Art, while the rest of the pieces were given to family members or sold at an auction at Anderson Galleries in New York, which is where the University of Michigan acquired the pieces in its collection.

Images (Figures 1-7 from left to right) 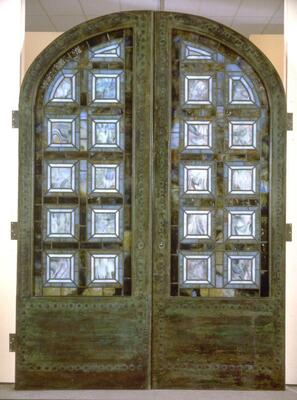 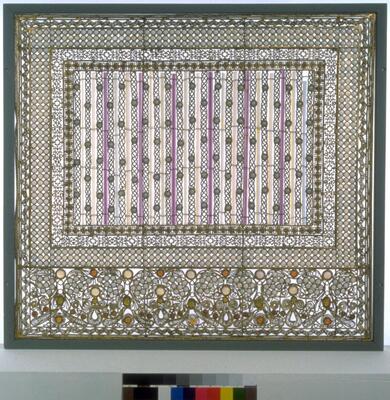 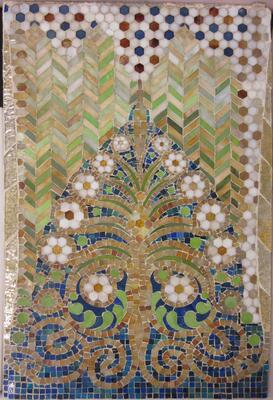 Louis Comfort Tiffany
Element from a mosaic frieze, entrance hall of the H.O. Havemeyer House, New York (one of 10 elements) 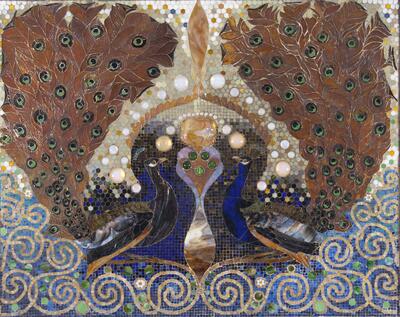 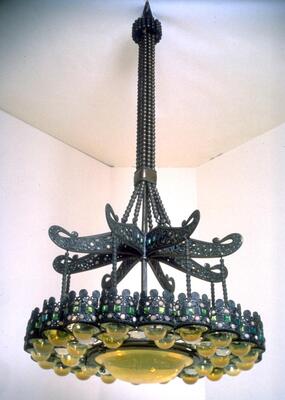 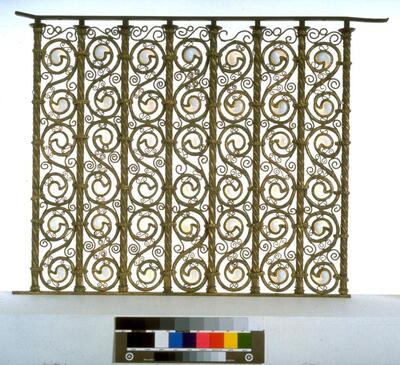 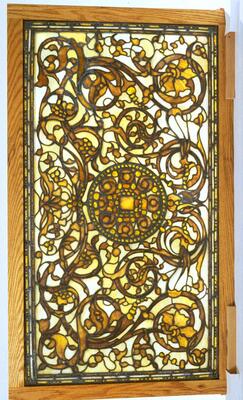 Burke, Doreen Bolger. In Pursuit of Beauty: Americans and the Aesthetic Movement. New York: The Metropolitan Museum of Art, 1986.