Below are some questions to consider when looking through this resource. You can click on any image to zoom in:

1) Which of these works seem more authentic or real to you? Why is that?

2) Where do you get your background/ideas of what authentic looks like?

3) What are some common themes/motifs that you see used(especially with the photographs by Edward Curtis and Laton Huffman).

3a) How are people represented? Are settlers and Indigenous peoples portrayed differently?

3b) How is the land represented/portrayed? Animals?

4) Who is doing the representation (who are the artists)? 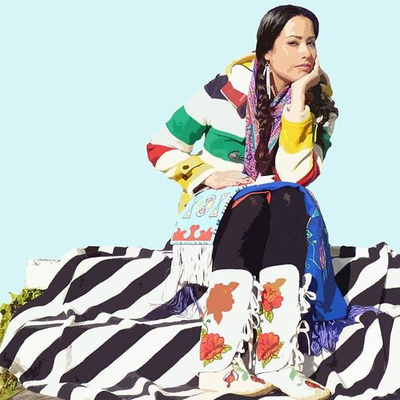 From her bio: Raised on the Apsáalooke (Crow) reservation in Montana, Wendy Red Star’s work is informed both by her cultural heritage and her engagement with many forms of creative expression, including photography, sculpture, video, fiber arts, and performance. An avid researcher of archives and historical narratives, Red Star seeks to incorporate and recast her research, offering new and unexpected perspectives in work that is at once inquisitive, witty and unsettling. Red Star holds a BFA from Montana State University, Bozeman, and an MFA in sculpture from the University of California, Los Angeles. She lives and works in Portland, OR.

In 1880, American photographer Charles Milton Bell made portraits of honored members of the Crow tribe who traveled from Montana Territory to Washington, DC to sign a treaty with US government officials. Reproductions of these images, available for download from the Library of Congress website, circulate widely in popular culture and continue to reinforce visual stereotypes of Native Americans.

Red Star's interpretation of these photographs humanizes the static portrayal of the delegation through gentle humor and personal information about each sitter. She crafts a new script for the Crow delegation: With bold red ink she points out the rich symbolism of the men's attire and hair, important details about their family histories, and their honored status within Crow culture. Although documentary portraits like Bell's appear truthful and informative, Red Star's additions demonstrate the inability of a photograph to tell a complete story. 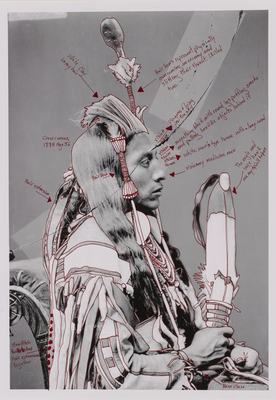 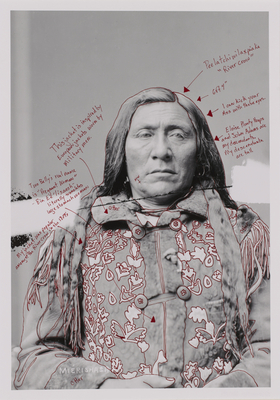 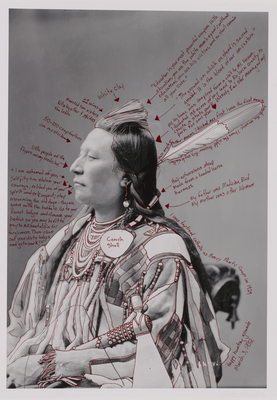 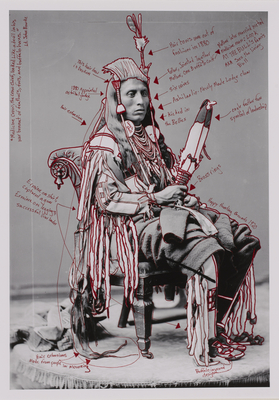 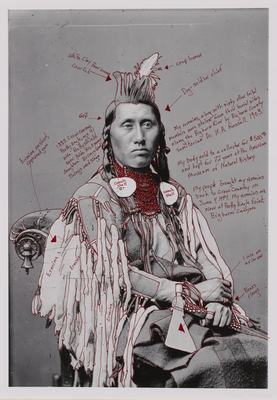 If you would like to hear Wendy Red Star talk about this work, you can watch an interview with her here: 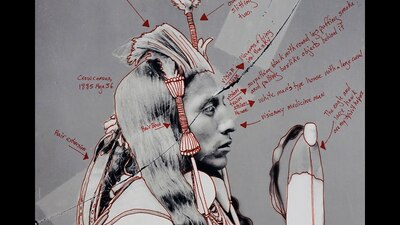 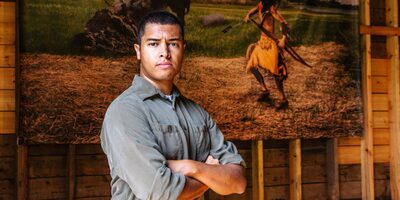 Jeremy Dennis (b. 1990) is a contemporary fine art photographer and a tribal member of the Shinnecock Indian Nation in Southampton, NY. In his work, he explores indigenous identity, culture, and assimilation.

Dennis was one of 10 recipients of a 2016 Dreamstarter Grant from the national non-profit organization Running Strong for American Indian Youth. He was awarded $10,000 to pursue his project, On This Site, which uses photography and an interactive online map to showcase culturally significant Native American sites on Long Island, a topic of special meaning for Dennis, who was raised on the Shinnecock Nation Reservation. He also created a book and exhibition from this project. Most recently, Dennis received the Creative Bursar Award from Getty Images in 2018 to continue his series Stories. 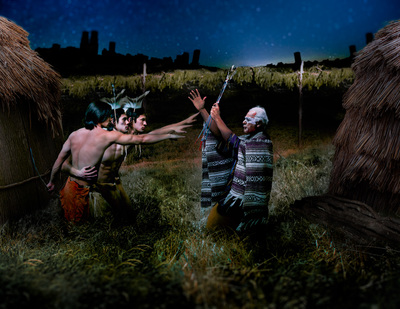 Image
Stories: Native American stories and legends have traditionally served the role of dealing with the unknown for Native people, specifically to illustrate the power of nature and create a reverence for it. As a Native American myself, recreating these stories with digital photography is my way of dealing with my own mysteries – where I come from and who my people are. The medium of photography, and my specific method of creating photorealistic, yet supernatural, images is to transform these stories from myths and legends on a page to depictions of actual experience in a photo. Using photography’s power to mirror reality, the stories subscribe to the modern standard of perceptual spiritual belief. 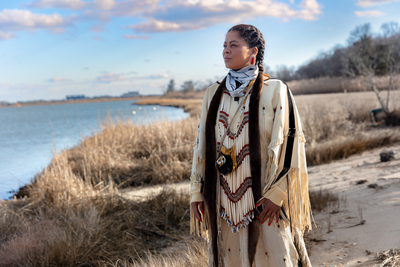 Image
The Shinnecock Portrait Project is a documentary photography project that aims to increase the recognition of the Shinnecock Indian Nation by combining traditional portraiture, 360-degree panoramic portraits based on Google Street View, and audio interviews discussing local issues accompanied by transcribed text. The project is a culturally significant way of preserving who we are at this present moment for future generations and a positive method of sharing images of who we are as a community. 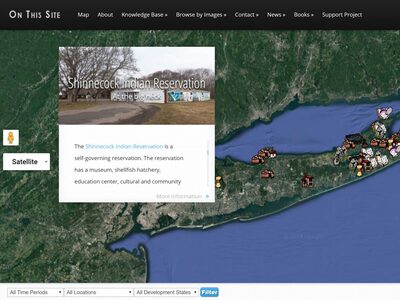 Image
On This Site is an art-based researched project by Shinnecock Nation tribe member and artist Jeremy Dennis. Dennis’ goal is to preserve and create awareness of sacred, culturally significant, and historical Native American landscapes on Long Island, New York. Through curiosity about his own origin and ancestral history, Dennis gathers and combines archaeological, anthropological, historical, and oral stories to answer essential cultural defining questions: Where did my ancestors live? Why did they choose these places? What happened to them over time? Do these places still exist? To seek the answers to his questions, Dennis researches, visits, and photographs each site; documenting the change in each landscape and highlighting the everlasting connection between place and memory. As a revelation, these sites remain but were made invisible.

If you're curious, watch this short interview with Jeremy about his work for On This Site: 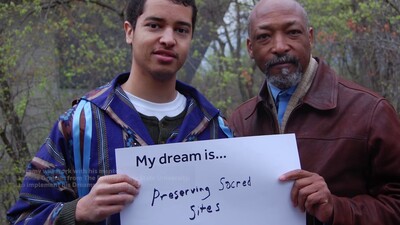 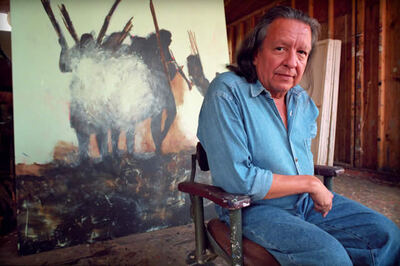 Controversial and prolific, Fritz Scholder embraced paradox. An enrolled member of the Luiseno tribe, he often said he was not Indian. Scholder's works were immediately recognized for their insight and powerful commentary on publicly held stereotypes of Native Americans and propelled Scholder into a position of prominence as an artist.

After graduating with an MFA Degree in 1964, Scholder accepted the position of instructor in Advanced Painting and Contemporary Art History at the newly formed Institute of American Indians Arts in Santa Fe, New Mexico.

Scholder has always worked in a series of paintings. In 1967, his new series on the Native American, depicting the "real Indian," became an immediate controversy. Scholder was the first to paint Indians with American Flags, beer cans, and cats. His target was the loaded national cliché and guilt of the dominant culture. Scholder did not grow up as an Indian and his unique perspective could not be denied. Scholder resigned from I.A.I.A. in 1969 and traveled to Europe and North Africa. He returned to Santa Fe and acquired a small adobe house and studio on Canyon Road. 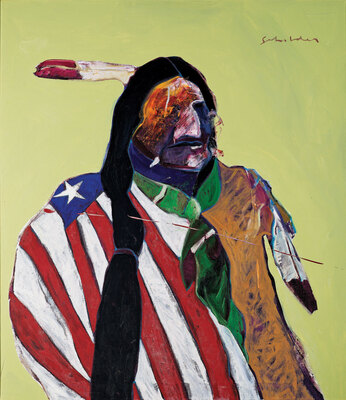 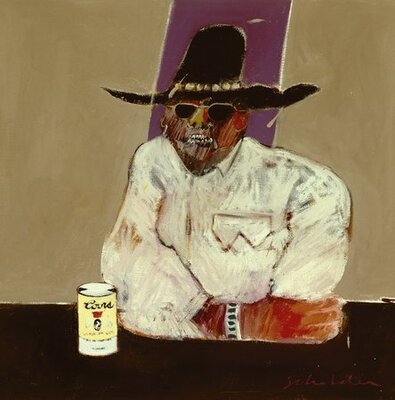 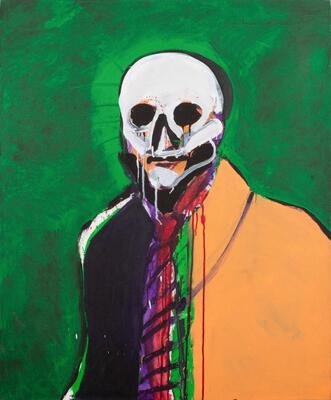