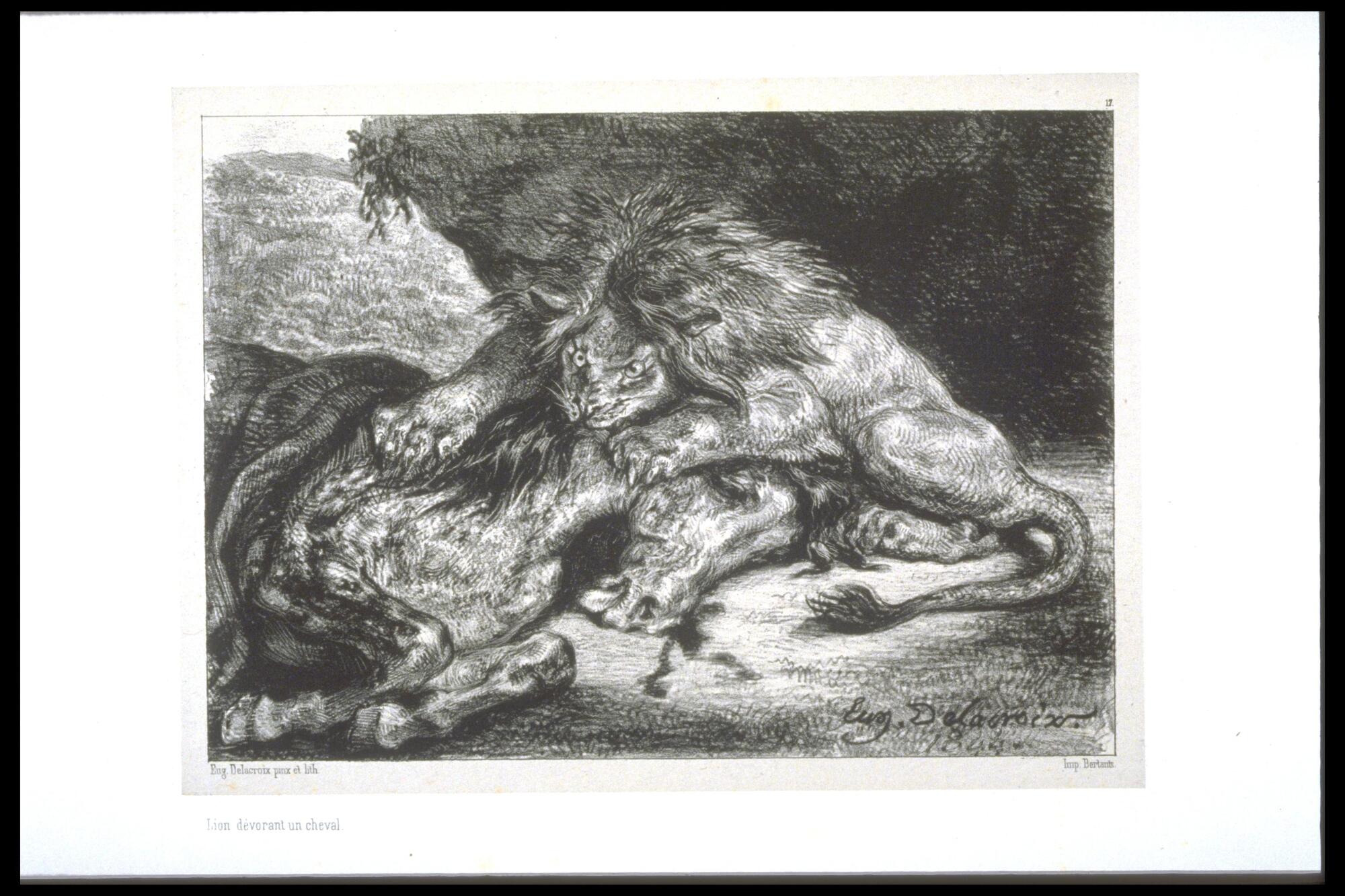 Label copy
Throughout much of his career, Delacroix was absorbed by the theme of struggle between combatants, both human and animal. His trip to Morocco and Spain in 1832 added an exotic vein to these conflicts as lions, tigers, and other animals took on a prominent role. Delacroix was able to study the large species of cats at the Jardin des Plantes in Paris with sculptor Antoine-Louis Barye, and many of the these paintings of animals fighting or being devoured refer to canvases by earlier artists whom Delacroix admired, such as Rembrandt and Rubens.
This lithograph of a lion and dead horse is one of a number of similar compositions. The intense focus of the lion as he devours the horse is echoed throughout the composition by the animal’s agitated and energetic pose, and by the spatial compression of the dark rocks behind him. Visual excitement is further generated by the dense hatching lines and the highlights produced by scraping through the blacks. The nervous contour lines of both the animals energize the scene—even the fallen horse—and lends the lion tremendous ferocity.
The Museum of Art has in its collection another Delacroix composition of a large cat straddling fallen prey, the etching Lioness Mauling the Chest of an Arab.
Gallery Rotation Fall 2011
Eugène Delacroix
France, 1798–1863
Lion Devouring a Horse
1844
Lithograph on chine collé
Museum purchase, 1954/2.25
Delacroix had the opportunity to observe large cats at the Jardin des Plantes in Paris, but his trip to Morocco and Algeria in 1832 fueled his imagination and understanding of these predators. Among the themes and memories drawn from his visit were hunt scenes, both men hunting lions or tigers and the big felines devouring their prey. Delacroix was a superb draughtsman and a master of the relatively new medium of lithography. Here the ferocity of the lion attacking the carcass of a horse is captured through the focused stare of the animal’s eyes, while the agitated short hatching lines and compressed space of the composition convey verve and unleashed vitality. Delacroix came of age as an artist as the classicism of the Enlightenment, which had dominated the previous century, gave way to a kind of art that prized emotion, inspiration, and even violence. For many artists (including Gericault, whose work is on the other side of this case), the wild natures of certain animals such as horses and the large cats epitomized this release from measured rationalism.

Subject matter
Delacroix traveled to North Africa in 1832, visiting Morocco and Algeria--a visit that fueled his interest in non-European cultures. The interest in exotic locales fascinated Europeans and coincided with the rise of tourism; painters (many of whom never left Europe) depicted distant places and different cultural settings, including harems. For the sophisticated and urbane Delacroix, the unleashed ferocity of wild animals--particularly the big cats--stirred his imagination. Scenes such as this of a lion attacking a horse figured frequently in Delacroix's art.

Physical Description
This black and white print depicts a male lion attacking the body of a horse near a rocky cave. Only the front portion of the horse is shown, lying on its side on the ground. The lion crouches above the horse and presses down with its front paws, claws extended, as it sinks its teeth into the horse's neck. There is a fierce, wild eyed expression on the lion's face. The scene is set in an undefined rocky landscape.