Combat of Romans and Dacians (after a relief on the Arch of Constantine, Rome) 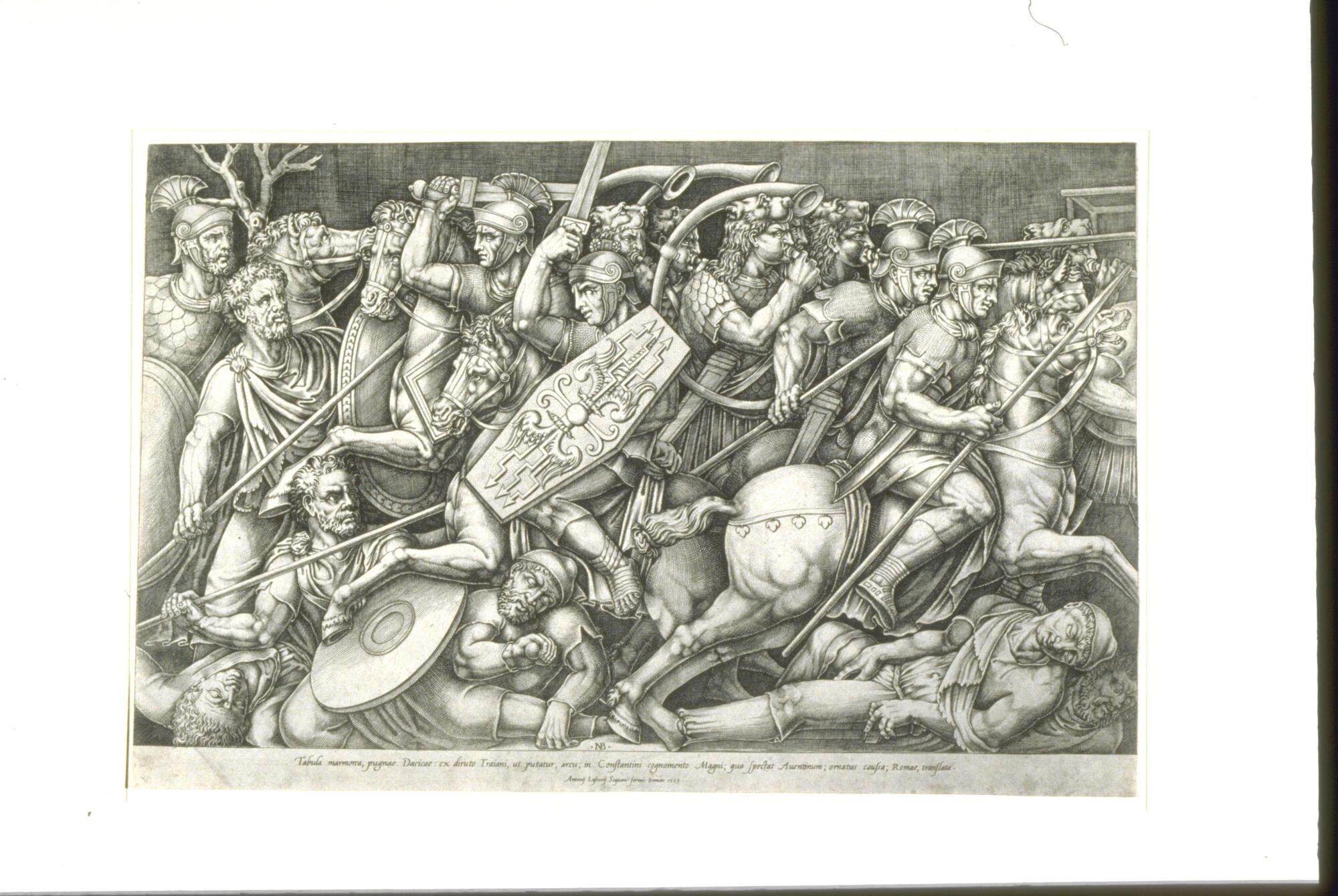 Title
Combat of Romans and Dacians (after a relief on the Arch of Constantine, Rome)

Label copy
March 28, 2009
Roman soldiers surge forward on their charging horses amid a crush of bodies, brandishing spears and swords against their barbarian enemies. The print-—by Nicholas Beatrizet, who worked in Rome during the mid-sixteenth century—reproduces a low-relief frieze sculpture from the second century CE that depicts the Roman Emperor Trajan conquering the Dacians in what is today Romania. The relief was later incorporated into the Arch of Constantine between 312 and 315.
The engraving exemplifies what scholars term a “reproductive print”: a print that faithfully copies an artwork in a different medium for the purpose of providing an honest and straight-forward reproduction of the original. Creating reproductive prints of famous artworks for audiences across Europe developed into a booming business in the sixteenth century. This print, like Jacob Bos’s Farnese Hercules displayed in a drawer of this case, was commissioned by one of the foremost publishers of reproductive prints Antoine Lafréry.

Subject matter
This print faithfully reproduces a relief sculpture from the second century CE celebrating the conquest of Dacia (modern Romania) by the Emperor Trajan. The print was commissioned from Beatrizet by the publisher Antoine Lafrery, who oversaw the production of numerous prints of famous artworks from antiquity as well as works by Michelangelo and Raphael, which had established Rome's reputation as an artistic capital of Europe. Prints of such famous artworks were widely sought after by collectors, connoisseurs, and artists.

Physical Description
This engraving reproduces a relief sculpture from the second century CE of Roman soldiers under Emperor Trajan conquering the Dacians in what is today Romania. The sculpture was later removed from its original monument built to honor Trajan and incorporated into the Arch of Constantine, erected in Rome by the emperor Constantine between 312 and 315.
The relief depicts mounted Roman soldiers, dressed in their characteristic armor and helmets, surging to the left and right from the center of the scene. A group of soldiers sounding horns stands in their midst. The Romans' vanquished Dacian foes lie trampled beneath the horses' hooves.