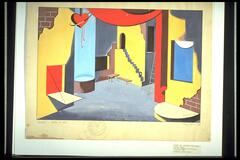 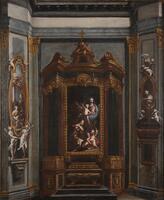 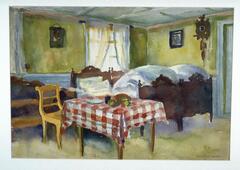 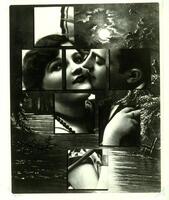 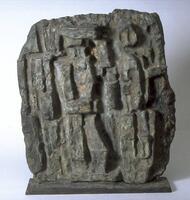 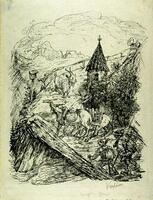 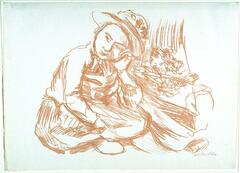 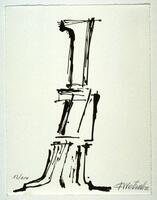 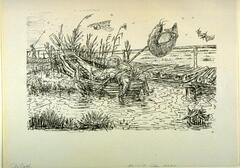 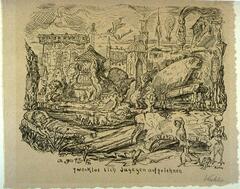 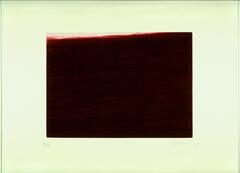 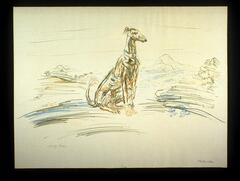 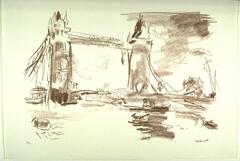 Label copy
Oskar Kokoschka
Austria, 1886–1980
Crucifixion
1958
Watercolor on paper
Gift of the Ernst Pulgram and Frances McSparran Collection, 2007/2.90
Alfred Kubin
Austria, 1887–1959
The Left Thief (Der linke Schächer)
1924
Pen and ink on paper
Gift of the Ernst Pulgram and Frances McSparran Collection, 2007/2.100
Like Dix’s reworking of da Vinci, many Expressionists remained drawn to traditional subject matter, despite their rebellion against the formal art establishment. Both Oscar Kokoschka and Alfred Kubin turned to biblical stories as sources but depicted these scenes in their own individual manner.
Kokoschka’s Crucifixion utilizes traditional iconography: Mary and John at the foot of the cross and a goblet in the foreground, a symbol of Christ’s blood. Yet Kokoschka’s forceful style dominates, as figures become linear contours and scale is abandoned.
Kubin’s Crucifixion, a preparatory study for his print Golgotha, omits Christ altogether—the cross lies empty on the ground—and instead focuses on the left thief, the “bad thief” who does not repent of his sins. The “good thief” hangs peacefully in the background while the misery of the bad thief, now alone and alienated as Mary and the spectators descend from the hilltop, emanates from his horribly distorted body and cynical gaze.

Subject matter
A traditional crucifixion scene, with Christ on the cross, and Mary and John at his feet gazing upward. A goblet (the cup of Christ) is at the foot of the cross.

Physical Description
A traditional crucifixion scene, with Christ on the cross, and Mary and John at his feet gazing upward. The background is a series of watercolor washes, and parts of the figures, particularly most of the sitting figure of John, is "inked" in over the background washes. A goblet (the cup of Christ) is inked in at the foot of the cross. Signed by the artist, b.r., followed by "VI - 58."