Portrait of  Lady by Tischbein

Where'd you get that fancy frock? 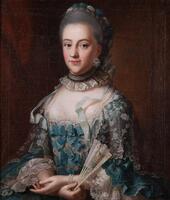 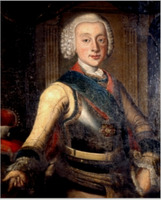 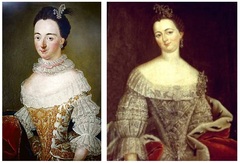 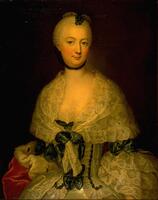 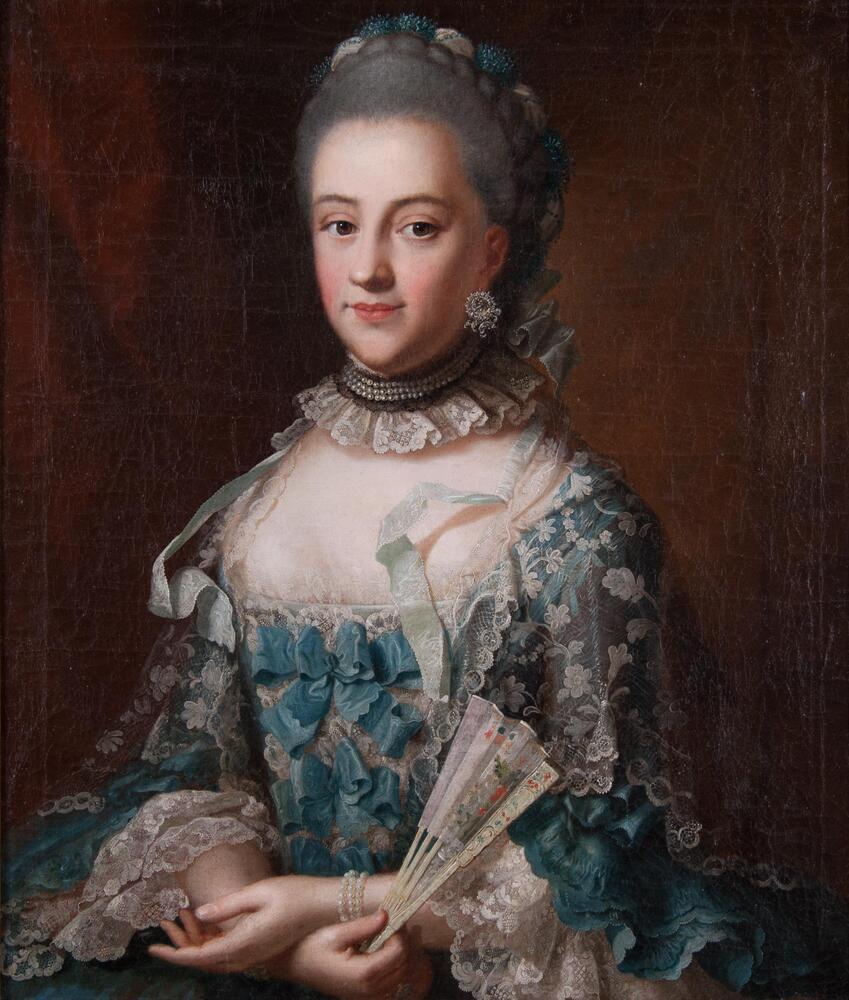 Johann Heinrich Tischbein the Elder (1722-1789). Could she be Princess Caroline Wilhelmina Sophia of Hesse-Kassel (1732 – 1759) Catherine the Great’s sister-in-law?

The artist, Johann Heinrich Tischbein the Elder, known as the Kasseler Tischbein, (3 October 1722, – 22 August 1789, Kassel) was one of the most respected European painters in the 18th century and an important member of the Tischbein family of German painters. He painted several portraits of court figures such as Princess Christine-Charlotte of Hesse-Kassel,which was also painted in 1754, and her mother Friederike-Charlotte Hesse Kassel (1698-1777), wife of Maximilian of Hesse-Kassel.

Friederike and Maximilian had eight children, of whom four princesses survived beyond childhood:

Princess Caroline of Hesse Kassel’s grandfather Charles I of Hesse-Kassel, like many of the Princes and Counts (Landgravine) in his situation, derived their main income by raising armies and lucratively renting them out as mercenaries, or more accurately ‘auxiliaries’ serving under their own flag, such as for the War of Spanish succession, which left Britain with the Asiento [permission to sell slaves in Spanish possessions] in the treaty of Utrecht.

Hessian soldiers were well trained and disciplined, and went on to comprise over a quarter of the British land forces in the American Revolutionary War. For example, Lieutenant General Wilhelm von Knyphausen, whose father had fought under the 1st Duke of Marlborough, (grandfather of Lord Charles Spencer Accession Number  2001/2.128) led forces in at least seven battles of the American Revolutionary war. (The Prussian, Baron von Steuben, famously disciplined American troops on the other side for General Washington.) The Hessian soldiers were recruited, often forcibly, for military service. If the “recruiters” captured a man, even in an illegal manner, the penalties for helping him escape could be as harsh as those in America for harboring escaped slaves. Across the Atlantic, African-Americans were enlisted by the Hessians as musicians, laborers, and soldiers. Of 131 blacks serving under the Hessians in a 1787 list, 94 were listed as drummers, better paid than the others who were infantrymen. As the war wore on, reinforcements were rounded up in Hesse from poorhouses, or “impressed” - kidnapped and forced to enlist. Approximately 1,200 Hessian soldiers were killed, 6,354 died of disease, and another 5,500 deserted and, possibly fearing to return home, settled in America. The German influence persists: the word "Dollar" comes from the German "Thaler."

When the Marquis de Lafayette returned to Europe in 1785 he paid a courtesy call on Knyphausen, who by then was military governor of Kassel, and wrote to Washington recording their reminiscences of the war and exchanging courtesies.

The Princess’s father Maximilian spent liberally on parks, castles, paintings, fine clothes, and a court orchestra. German composers like the Bach family were dependent upon patronage from royalty. Upon her marriage to Frederick Augustus, Prince of Anhalt-Zerbst at Zerbst Castle in 1753, Princess Caroline became Princess Caroline of Anhalt-Zerbst.They were married six years with no heir produced when she died. Her husband remarried but had no children with  his second wife Princess Friederike of Anhalt-Bernburg either, perhaps not surprisingly since she lived in Basel and he moved to Luxembourg. 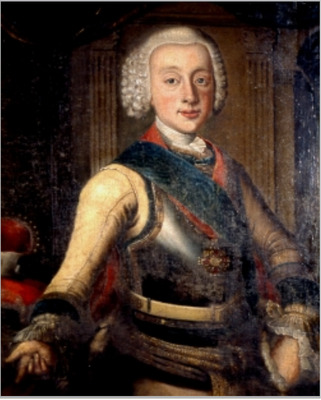 Friedrich August, Prince of Anhalt-Zerbst (1734-1793) in Stettin, Prussia (now Szczecin, Poland) was the only son of Christian August, Prince of Anhalt-Zerbst and his wife Johanna Elisabeth of Holstein-Gottorf to survive into adulthood. His older sister was Sophie Auguste Frederike, who married Emperor Peter III of Russia, and after his death became Empress Catherine II, better known as Catherine the Great. His mother, Johanna Elisabeth of Holstein-Gottorp, was Princess Regent for him until he came of age in 1752. She may be the subject of the Portrait of a Lady by Anna Rosina Matthieu, whose appointment as Court Painter to Anhalt-Zerbst was made within three years of the completion of the painting.

Side note 2: Caroline’s uncle, the Prince of Orange, became a General at age 21 who served under the Duke of Marlborough (see Accession Number: 2001/2.128) in the War of Spanish Succession.

The primary function of Princesses like Caroline was to produce heirs for the Royal Houses of Europe. Caroline’s Uncle was King Frederick I of Sweden, her sister Wilhelmina was married to Henry, brother of Frederick the Great, King of Prussia, and her cousin was married to Princess Mary, King George II of Great Britain’s daughter. Catherine the Great, Empress of Russia was Caroline’s sister-in-law, and her niece Hedwig was Queen to King Charles XIII of Sweden. Caroline is distantly related to Prince Albert, husband of Queen Victoria, and to the present day Queen Elizabeth II of England and to her husband the Duke of Edinburgh, as well as the Kings of Denmark, Norway, Sweden, and Greece and (now republics), who have inherited much of the land, palaces and art collections and wealth of their forebears. Caroline’s grandparents are the most recent ancestors of all currently reigning monarchs of Europe.

Paintings of Princess Caroline by other artists 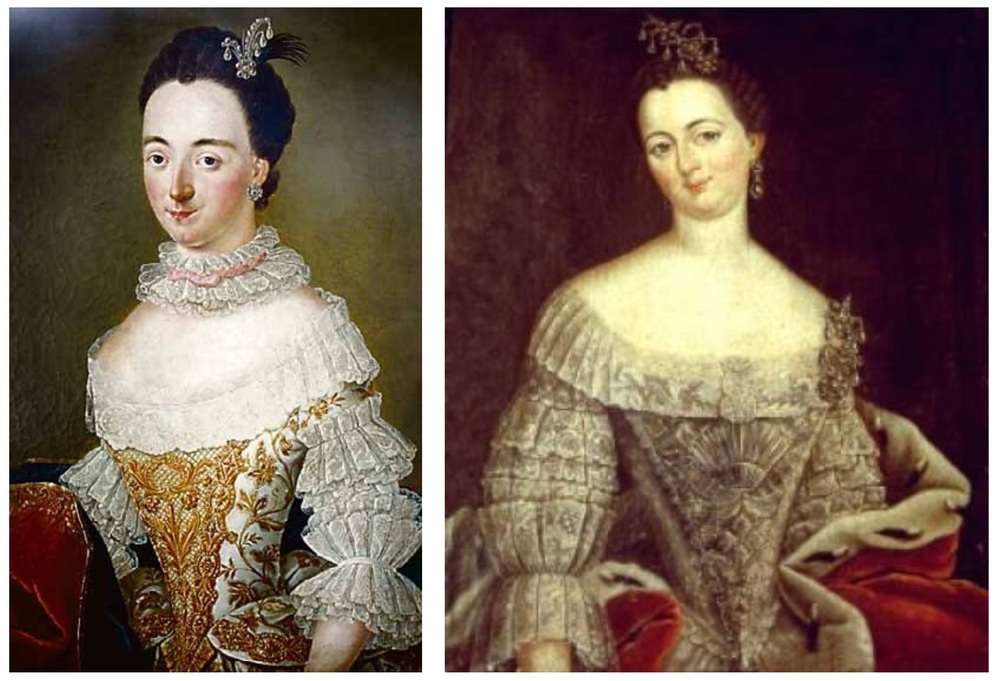 The portrait style of the time is so restricted that all the women look very similar, and the only variation is in the arrangement of the fabric and the quality of the painting. Admittedly, many of these minor princes and princesses were related and intermarried, so facial similarity is to be expected, besides a degree of flattery may smooth out individual characteristics.

While this portrait may not represent Princess Caroline of Hesse-Kassel, the milieu she lived in would have been very similar.

Johann ValentinTischbein (as mentioned in the UMMA Exchange) or Johann Heinrich Tischbein?

Confusion arises because the Tischbein family of German painters spanned three generations. Johann Valentin was in Kassel in the 1730’s but in the 1750’s he was in working in the Netherlands. His painting of Anne of Hanover was painted in 1753.  “Portrait of a Lady” in UMMA’s collection, is similar in quality to Johann Heinrich Tischbein’s portrait of Friederike-Charlotte, Caroline’s mother. In 1753, J.H. Tischbein the Elder had been appointed court painter to William VIII, Landgrave of Hesse-Kassel, Caroline’s grandfather.

Caroline’s cousin’s son, Wilhelm IX  aka Wilhelm I Elector of Hesse (1743-1821) inherited possibly the largest fortune in Europe on his father's death in 1785, which was derived mainly from the hire of troops to the British government for the putting down of the Revolution in the United States.

All Rights Reserved (Written and collated by Sophie Grillet)