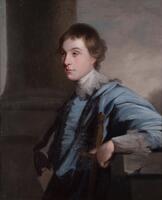 Dated the year after his father’s death (possibly payment date rather than creation date?)

The amiable Charles (snr) 3rd Duke of Marlborough, was generally well-liked... He made sure to frequently write his wife when on military campaigns, and always sent his love to their children. He had no concept of economy, and was a heavy spender. He was so notoriously incompetent with money that when he suddenly died in 1758, acquaintances wryly remarked that he died before he could spend his heir's inheritance on the estate. (-- Wikipedia)

One of his military campaigns was a raid which he commanded on the French port of St Malo in summer 1758. St Malo was the fifth slaving port in France, and Britain didn’t want the competition. Marlborough’s raid set fire to eighty ships [including slavers, privateers, merchant ships and some under construction] in a nearby harbor. However, it was in October during a military campaign in Germany that he caught dysentery, and, like so many other soldiers, died of it. This ignominious mode of death, unlike the first Duke’s successful exploits at Blenheim, may have made it all the harder for the family.

The 18th Century was one of almost permanent warfare, as Kings, companies and European countries fought the world over for who would get the rights to plunder the rest of the world for goods, land and slaves. In the early part of the century, much depended on who would inherit the Crown of Spain, as King Charles III was dying without a clear heir. Lord Charles Spencer’s forebear, the 1st Duke of Marlborough, had won his title, much land and Blenheim Palace, as a reward for advancing Britain's position toward top colonial power. The Seven Year’s War (1756–1763), a worldwide conflict from the Philippines to the Americas, was the turning point for Britain.

Perhaps his father’s sudden death in October 1758 explains why the painting remained unfinished.

Lord Charles had an older brother George, and younger brother, Robert and two sisters. The eldest son would inherit the title (Duke), while younger sons were backups, in case the older one died. Charles’s eldest sister was Lady Diana Spencer. She was considered scandalous when she abandoned her husband and position as the Queen’s Lady-in-waiting to live with another man, earning her living as an artist. She became friends with James Boswell, Samuel Johnson and Joshua Reynolds. Lord Charles’s second sister also had an unhappy marriage and left her husband. Although she was subsequently persuaded to take him back, she said afterward, "Husbands are dreadfull and powerful Animals" and went on to live apart from him.

Lord Charles married Lady Mary Beauclerk, a great-grand-daughter of King Charles II, who inherited a fortune through her maternal grandfather’s role as a colonial administrator for Madras, India, in the East India Company. Lord Charles and Lady Mary had three sons, (the youngest of whom became a successful poet and playwright; two of his sons became Bishops: one of Jamaica and one of Madras). Lady Mary left Lord Charles after having the children, although she returned when his series of begging letters to peers and politicians seemed about to gain him a well-paid position.

Paid appointments he did achieve, were:

In those days a parliamentary seat was, usually bought, or often in the gift of the nobility. The few people who could vote expected recompense for doing so. For a while Lord Charles’s brother the 4th Duke of Marlborough no longer wished to sponsor him when Charles’s son John married his own cousin, the Duke’s daughter.

The family lived at Blenheim Palace, an immense building that took decades to complete. The house, set in 2,000 acres of parkland has 187 rooms, and from the outset an extensive domestic staff; in 1764 when Lord Charles was a young man, the Marlboroughs had around 90 servants of whom over 70 were resident, their wages and liveries costing almost £3,000 a year. The land at Woodstock in Oxfordshire was a gift of Queen Anne for the 1st Duke of Marlborough’s successful military campaign in Germany, notably the Battle of Blenheim in 1704. Lengthy disputes subsequently arose as to who was to pay for the construction - the Crown, the Duke or even the British taxpayers.

The Spencer-Churchills and Dukes of Marlborough are forebears of Winston Churchill and of the late Princess Diana. The 12th Duke of Marlborough currently resides at Blenheim Palace, which is a registered charity and, as it was from the start, a tourist attraction.

A later painting of Lord Charles Spencer by Tilly Kettle.

Any relation to Marlboro cigarettes? Yes, indirectly. After several decades importing Virginia tobacco to London, Philip Morris died of cancer, and in 1873 his brother and widow opened a cigarette factory on Great Marlborough Street in London. (In 1860 there were over 490,000 enslaved people in Virginia), Great Marlborough Street’s construction began in 1704, and was named for the 1st Duke of Marlborough as he became following his army’s victory at Blenheim. It has been a high class address ever since.