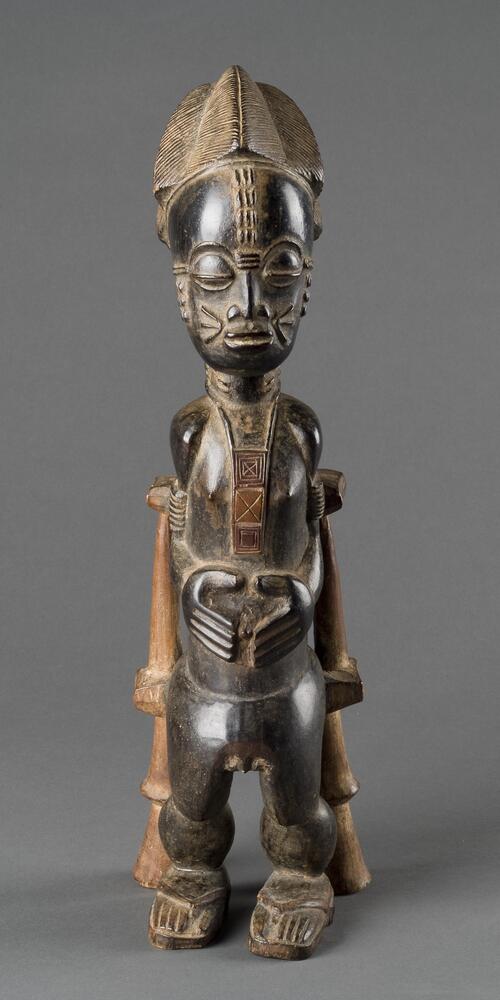 This activity could take place in the museum or in the classroom. It is differentiated so educators can decide how best to adjust the level of instruction to fit students' abilities.

Objective: Students will become familiar with vocabulary (canon of proportion). They will explore how sculptural representations of the human figure relate to proportion and how those may be culturally or temporally bound. They will analyze various canons of proportion and calculate the ratio for each.

1. Study sculptures of the human figure, such as the Male Spirit Spouse or Standing Figure. You may also find a moveable figure, often used for drawing different poses (from IKEA and other sources).

2. After reviewing fractions, divide the body into parts. You may also provide a handout of the divisions of a head or body. Ask students to choose a unit of measurement (an eye, a head) and calculate how many "eyes" wide the head is, or how many "heads" tall a body is.

·       This marble figure is a copy of a bronze sculpture made by the Greek artist Polykleitos about 440 B.C. To create this statue of an ideal human form, Polykleitos developed a mathematical system of proportions that brought sculpture to a new level. He called his system the Canon (meaning “rule”).

·       For Greek artists, the harmony, order, and balance they saw in nature was the standard of perfection they aimed for in art. In his Canon, Polykleitos set forth the mathematical relationships between different body parts that would result in a perfect human form. Historians think he based his system on the concept of symmetria, or harmony between the parts and the whole.

·       The original bronze Doryphoros no longer exists. The version in the MIA’s collection was made by a talented Roman sculptor who copied the masterpiece, taking careful measurements to reproduce its proportions. (information from Minneapolis Institute Arts, “Math in Art.”)

Connect Doryphoros to the Egyptian canon of proportions. Show an example of a chart with an Egyptian example, in which the head is approximately 2.5 units while the body is approximately 18.5. 1.     Discuss what this means in terms of a ratio: a ratio is a comparison of two similar quantities obtained by dividing one quantity by the other. Ratios are written with the : symbol. The ratio of 6 to 3 is 6/3 = 6:3 = 2. Since a ratio is a relation or comparison between quantities, it is an abstract number. For instance, the ratio of 6 miles to 3 miles is only 2, not 2 miles. So, the ratio of body to head in this Egyptian example: 18.5 / 2.5 = 7.4   This is about the same ratio as Polykleitos’ Doryphoros.

In time, a new Greek canon arose, pioneered by Greek sculptor Lysippos. A characteristic of this newer canon included a slightly smaller head (1:8 of the total height, rather than the 1:7 of Polykleitos) and longer and thinner limbs. Historian Pliny notes a remark that Lysippos said that while other aIrtists “made men as they really were, he made them as they appeared to be.” (Wikipedia) If time allows, discuss art historical terms: naturalism vs. idealism.

Return to Lysippos’ comment about using the canon to portray men as they appear to be. What do you think he meant by that? Why would he move from a naturalistic canon to his?

Choose another sculpture, such as a Swiss sculptor Alberto Giacometti. Calculate the approximate ratio used by Giacometti. Measure the figure’s head and determine how many “heads” comprise the entire figure.  Offer brief background of Giacometti: working in the wake of WWII, he faced an existential crisis and created a unique Surrealist style that is very elongated and textural. Why might he use this ratio? Is it harmonious?

Ask students to calculate the approximate ratio used by the Baule artists who carved this spirit spouse. (Head is approximately 1:3 ratio). Why would the artist possibly have chosen this ratio? Which body part is given prominence? Offer brief background: In Baule culture, the head is very important and indicates the site of intelligence, knowledge, and leadership. Hairstyles and headdresses are also highly respected because they emphasize the head.

Often American students look at African art and are puzzled at the lack of naturalism. They are more accustomed to the proportions of the Western canon. Thinking about ratios and intentionality can allow students to see symbolism in different representations of the human figure.

·       How do artists use ratio to communicate their values and ideals?

·       What examples do we encounter that enforce our cultural standards of beauty and masculinity and femininity (billboards, fashion models – who often are unnaturally thin, emphasizing long limbs, professional athletes)?

·       Who is responsible for creating these “norms” that seem so natural and like a “given?”

·       Suggest that students measure other figures and calculate their canon of proportions. What does their head to body ratio communicate about the value of the industry?