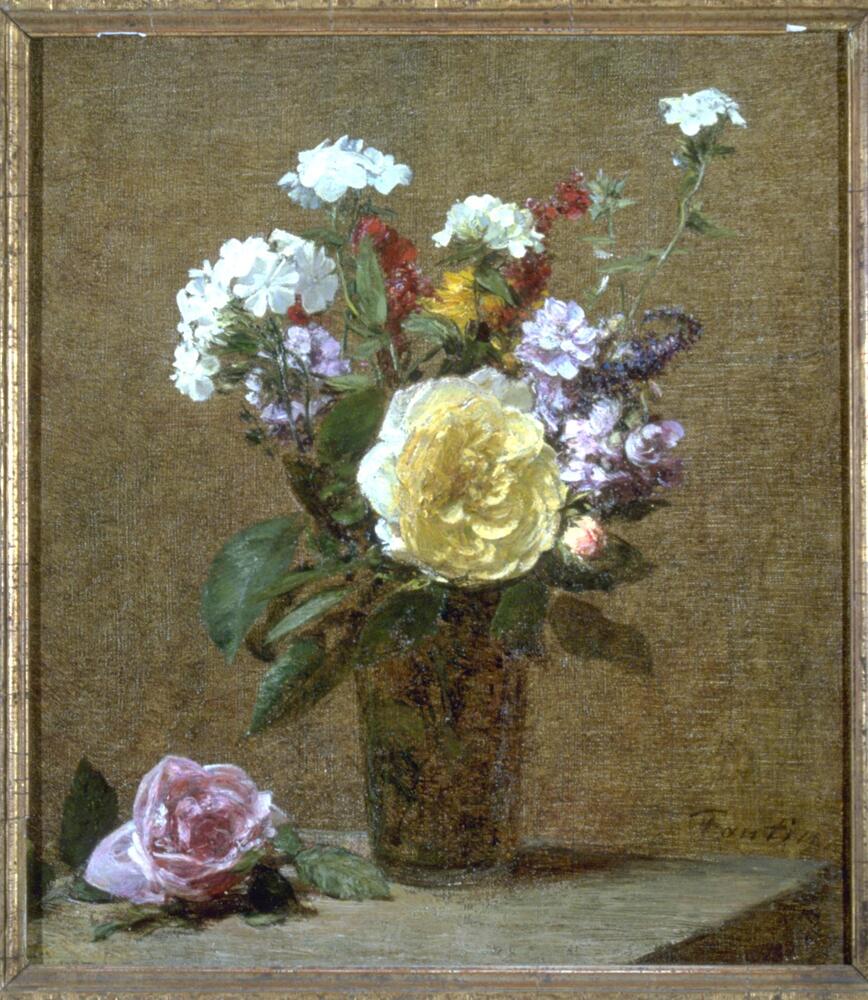 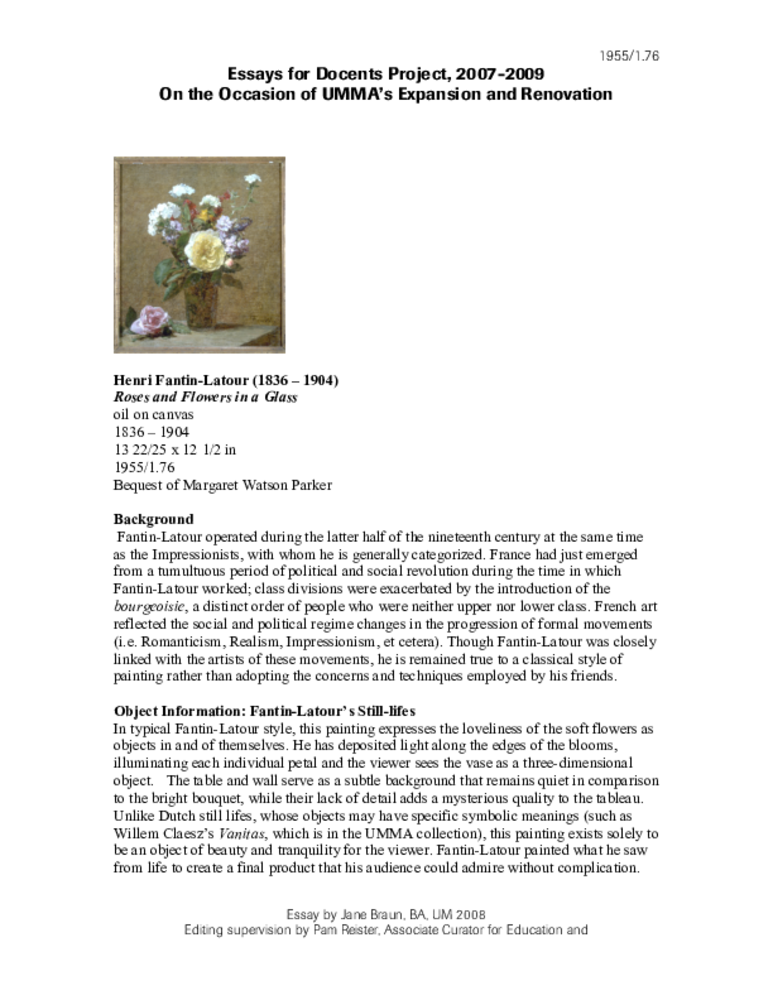 Background
Fantin-Latour operated during the latter half of the nineteenth century at the same time as the Impressionists, with whom he is generally categorized. France had just emerged from a tumultuous period of political and social revolution during the time in which Fantin-Latour worked; class divisions were exacerbated by the introduction of the bourgeoisie, a distinct order of people who were neither upper nor lower class. French art reflected the social and political regime changes in the progression of formal movements (i.e. Romanticism, Realism, Impressionism, et cetera). Though Fantin-Latour was closely linked with the artists of these movements, he is remained true to a classical style of painting rather than adopting the concerns and techniques employed by his friends.

Object Information: Fantin-Latour’s Still-lifes
In typical Fantin-Latour style, this painting expresses the loveliness of the soft flowers as objects in and of themselves. He has deposited light along the edges of the blooms, illuminating each individual petal and the viewer sees the vase as a three-dimensional object. The table and wall serve as a subtle background that remains quiet in comparison to the bright bouquet, while their lack of detail adds a mysterious quality to the tableau. Unlike Dutch still lifes, whose objects may have specific symbolic meanings (such as Willem Claesz’s Vanitas, which is in the UMMA collection), this painting exists solely to be an object of beauty and tranquility for the viewer. Fantin-Latour painted what he saw from life to create a final product that his audience could admire without complication.

Technique
Fantin-Latour used oil paint on canvas to create this work. He demonstrates here his ability to build up layers of glaze, which create rich, lustrous surfaces that emit a deep, lifelike quality. He has arranged the composition carefully so that there is a distinct diagonal thrust from the top right corner to the bottom left; the tall stem that extends above the vase to the right is balanced by the errant bloom that sits next to it on the left. The combination of the technique and composition make this painting a paradigm of beauty and perfection. Artist Henri Fantin-Latour was born in France in 1836. He began his studies in the visual arts with his father before spending a probationary year at the prestigious École des Beaux Arts on Paris’ left bank. In 1853, at the age of 17 and having dropped out of the École, Fantin-Latour began to work in the halls of the world famous Louvre. He worked diligently to reproduce the works of the great Venetian colorist masters and early nineteenth century genre painters, particularly Titian, Veronese, and Delacroix. He admired these artists’ ability to handle light and model seemingly three-dimensional forms on a flat surface.

Throughout his life, Fantin-Latour lived primarily in Paris and rarely left the city. After meeting fellow artist James McNeill Whistler, however, he decided to travel with him to Britain. There, he met Mr. and Mrs. Edwin Edwards, who commissioned several floral still lifes and helped him gain recognition as a respectable painter.

Fantin-Latour remained true to the lessons learned while copying the classical styles displayed in the Louvre and truly thought of his still lifes as mere exercises in color and light, a way for him to make money so he could paint like the classicists who he so admired and who were such great inspirations. Though he made his money painting nature, he rarely painted in the outdoors, citing that the old masters never did landscapes. Toward the end of his life, Fantin-Latour moved to Buré, a small town in French countryside of Basse-Normandie, where he painted flowers prolifically until his death in 1904.

Fantin-Latour is known for his ability to synthesize light and color in his vivid floral arrangements. He is often categorized with the contemporaneous Impressionists with whom he was friends. Instead of following the new doctrine of emotional painting set forth by his colleagues Manet, Degas, and Whistler, Fantin-Latour preferred to rely on the tried-and-true practices of the classical colorist painters. Unlike the Impressionists, whose style of painting was inspired by their subjects, he believed that technique had to be separated from subject. However, though it was his floral arrangements that made Fantin-Latour famous, he preferred to paint portraits of historical scenes than still lifes and considered his many floral paintings as solely a means of making money.

Fantin-Latour attempted to synthesize sound and color in his work. He was inspired by contemporary music, particularly that of Berlioz and Wagner, and created illustrations of their operas to try to capture the movement of sound that he heard in their work. Like music, color was a language in its own right, inexpressible through words. The work Fantin-Latour did after the operas, such as Berlioz’s Requiem or Tanhäuser, was some of the only improvisational work he completed.