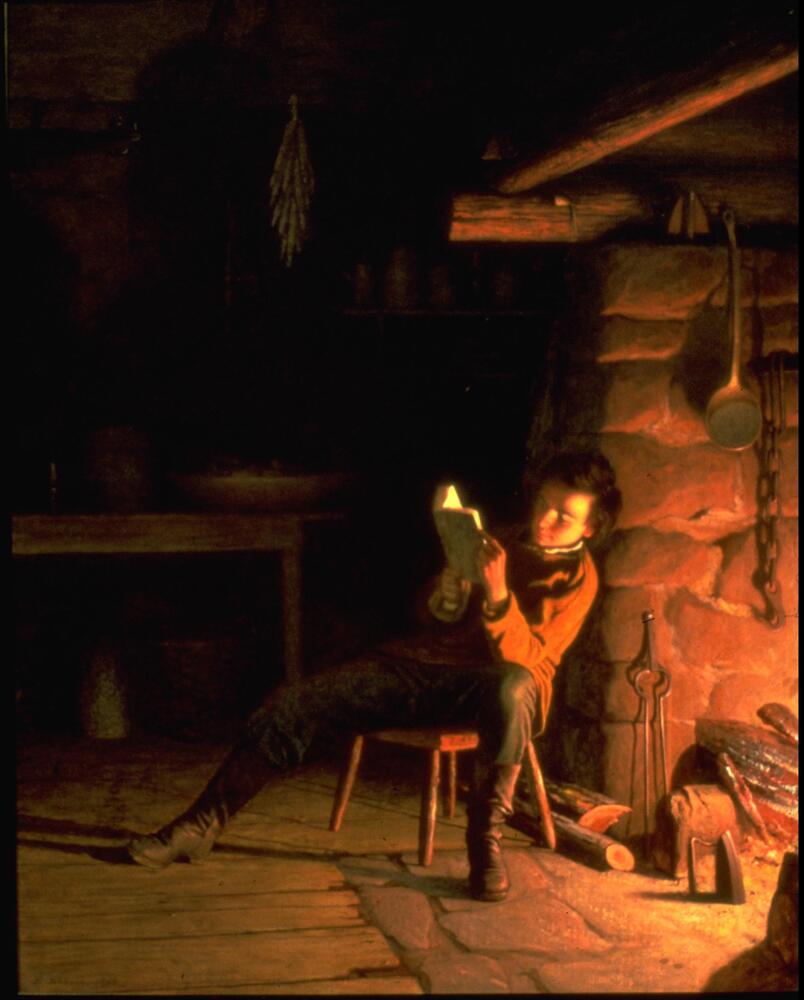 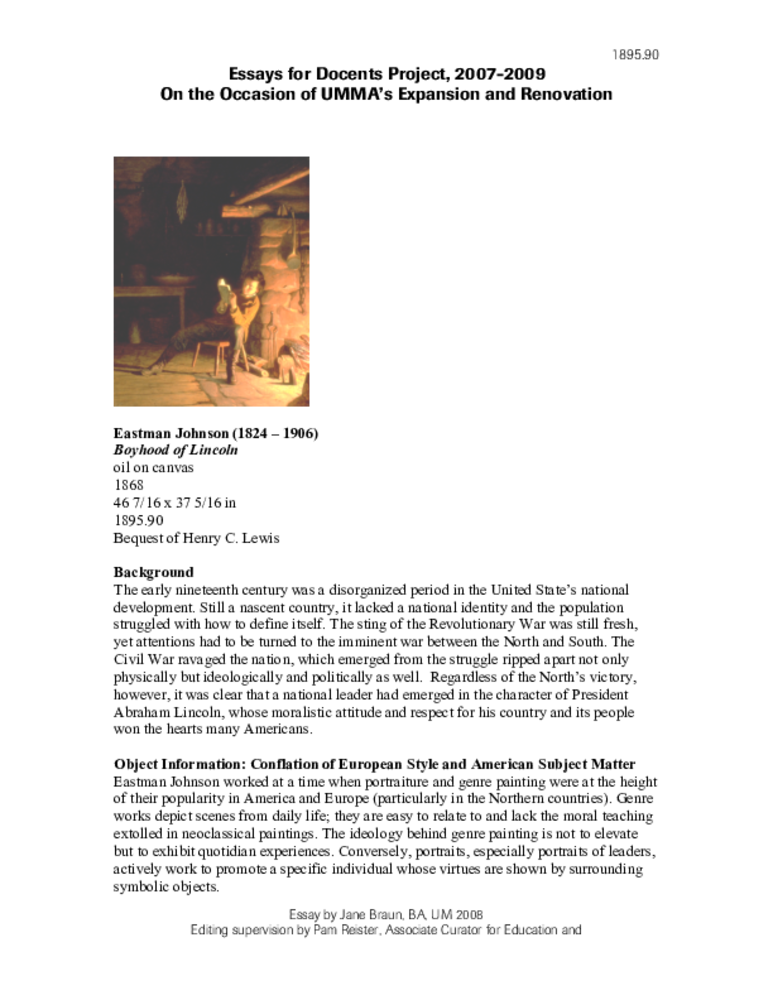 Background
The early nineteenth century was a disorganized period in the United State’s national development. Still a nascent country, it lacked a national identity and the population struggled with how to define itself. The sting of the Revolutionary War was still fresh, yet attentions had to be turned to the imminent war between the North and South. The Civil War ravaged the nation, which emerged from the struggle ripped apart not only physically but ideologically and politically as well. Regardless of the North’s victory, however, it was clear that a national leader had emerged in the character of President Abraham Lincoln, whose moralistic attitude and respect for his country and its people won the hearts many Americans.

Object Information: Conflation of European Style and American Subject Matter
Eastman Johnson worked at a time when portraiture and genre painting were at the height of their popularity in America and Europe (particularly in the Northern countries). Genre works depict scenes from daily life; they are easy to relate to and lack the moral teaching extolled in neoclassical paintings. The ideology behind genre painting is not to elevate but to exhibit quotidian experiences. Conversely, portraits, especially portraits of leaders, actively work to promote a specific individual whose virtues are shown by surrounding symbolic objects.

The Boyhood of Lincoln is particularly interesting because it employs aspects of both genre painting and portraiture. The scene itself is evidently a depiction of the everyday and is reminiscent of contemporary European genre works, yet Johnson has chosen to paint a specific person who had great influence over American life in the nineteenth century, someone who would be a more likely candidate for portraiture. As such, his Boyhood of Lincoln might be considered a meditation on the representation of the new United States vis à vis a European painting convention.

Technique: Depiction of Subject Matter
In this scene, Johnson shows us a snapshot of a youth who diligently reads his book by the fire. Though this snippet of daily life might seem trivial to the twenty-first century viewer, the boy and his surroundings would have been significant to the viewer at the time they were painted because the interior of the home was the center of family life during the early nineteenth century. It was the place where all the family members came together to cook, work, and socialize. At the hub of the home were the fire and the surrounding hearth, the primary source for cooking, heat, and light. Maintaining the fire was an important task in every household. The hearth remained a symbol of family togetherness and responsibility. Johnson’s depiction of Lincoln before the fire connects him to the idea of his early virtue. The fact that he is reading reminds us of the stories of his studying by the fire after everyone else has gone to bed.

Having studied in Düsseldorf and The Hague, Johnson was extremely influenced by Northern painters, particularly Rembrandt, whose paintings often depicted an interior scene with a dramatic contrast between dark and light. Intense shading and modeling of form, such as we see in Boyhood of Lincoln, also played a major role in the way that Northern artists painted. Technically, Johnson maintained the Northern artistic conventions he learned in Europe, but he frequently chose subject matter that broke with the European tradition. Where many Northern painters chose to depict misbehaving household help or children who ought to be in school, Boyhood of Lincoln is more like Rembrandt’s choice of subject, which often showed religious scenes with a moral to them. Here we see a similar noble and moralistic scene, yet of a quintessentially American subject.

Artist
Eastman Johnson was born in Lovell, Maine in 1824. The third of seven children, he grew up during a minor economic boom in New England. As a result of the family’s newfound wealth, the Johnsons moved from Lovell first to Fryeburg in 1828 and eventually settled in Augusta; Johnson’s frequent childhood relocations would be a continuing theme throughout his adult life. His father was very successful in Augusta, which enabled him to study art from an early age. At sixteen, Johnson had completed his training and went to work in Concord, New Hampshire, which led to a secure position in a Boston lithography shop. In 1842, he went back to Augusta and began of his career as a portrait artist.

As a “face-painter,” Johnson was extremely meticulous and took care to represent his subjects accurately and convincingly. In 1846 he was in Washington D. C., where he would spend less than a year. Working in the Capitol building, he painted justices of the United States Supreme Court and then people such as Dolley Madison, Mrs. Alexander Hamilton, and John Quincy Adams. In September, Johnson returned to Boston, working this time in Armory Hall. His portraits became more dramatic as Johnson focused on intense chiaroscuro, emphasizing the contrast between shadow and light.

In 1849 Johnson set sail, along with fellow Bostonian artist George Henry Hall, for Düsseldorf, where he would enroll in the prestigious and demanding Düsseldorf Kunstakademie. Headed by the famous painter Emanuel Leutze, the Düsseldorf Academy was a popular destination for artists, such as Charles Wimar, seeking formal artistic training. At the Academy, Johnson was introduced to genre painting, which was at the height of its popularity in Europe.

After his stay in Düsseldorf, Johnson moved to the Dutch city of The Hague, which provided a great influence on his work, especially genre painting, with its Northern flair for the dramatic. Johnson studied diligently the works of many Dutch artists, particularly Rembrandt, who is known for the contrast between light and shadow in his paintings. By 1854, Johnson was working for the Pulchri Studio in The Hague as a portrait artist, where he was able to combine his American traditions with European convention. Johnson finally returned home in 1855. He stayed in Washington D.C. for only a year before moving west with his older brother Rueben to Wisconsin. They stayed on the coast of Lake Superior, where Johnson practiced painting both portraits and landscapes. Johnson also went off to explore the nearby Apostle Islands and Isle Royale with Stephen Bonga. The two men built a cabin at Pokegama Bay, which Johnson sketched. It is generally thought that these sketches of the cedar log cabin may be the source of the interior of Boyhood of Lincoln because of the similarities between the two. During the winter, the Johnson brothers returned to Washington, where the younger participated in the first annual Washington Art Association exhibition with ten works: five paintings and five drawings.

In the summer of 1857, Johnson returned to Wisconsin and continued his study of the American frontier. He became close with the Anishinabe (Ojibwe) and Chippewa Indians, and painted several portraits of tribal members, some of his best known work. The paintings are remembered as idealized, almost Romantic, depictions of the “Noble Savage,” such as his 1856-57 charcoal on paper drawing Midosuay Beek.

Johnson finally settled in New York in 1860, where he focused on the experience of the American home. In 1869, he married Elizabeth Buckley. The couple traveled to Nantucket during the summers, and the work Johnson completed there helped maintain his reputation as a painter of the American experience. By 1880, the artist had returned almost exclusively to portraiture. He is remembered as a pragmatic, factual painter who wanted to give his audience a glimpse of classic Americana.


Backstory: Nydia in a Changing Museum