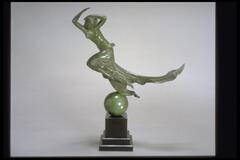 Medium & Support
bronze on marble base

Label copy
*Gallery Rotation Fall 2010
Paul Manship
United States, 1885–1966
Flight of Night
1916
Bronze on marble base
Bequest of Margaret Watson Parker, 1955/1.133
Perhaps best known today for his iconic gold Prometheus sculpture at Rockefeller Center in New York, Paul Manship was one of the most prominent American sculptors in the interwar period. Unlike many artists of his generation who went to Paris, Manship studied in Italy under the auspices of the American Academy in Rome and traveled extensively throughout the Mediterranean. He developed a mature style that combined the graceful proportions and idealized features of academic training with elements from a wide range of cultures and periods, including ancient Greek, Italian Renaissance, Indian, and Assyrian sculpture. Manship often turned to classical mythology for his subject matter, and the semi-nude woman depicted here is probably the moon goddess Diana (Artemis in Greek mythology), who was chased from the sky each morning by her brother, the sun god Apollo. An allegory for the passage of time, Flight of Night is one of many sculptures in which Manship explored flight and movement, emphasized through the grand sweep of her drapery, the angularity of her limbs, and the off-kilter positioning of the figure on the base.