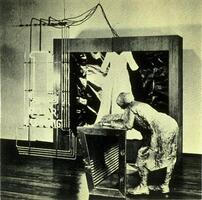 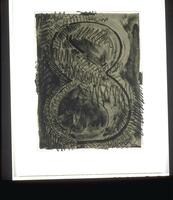 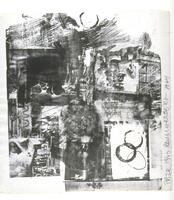 Medium & Support
can of Campbell's soup and ink

Label copy
Pop artist Andy Warhol is widely known for his use of the silkscreen to create a series of images whose subject matter is borrowed directly from popular culture. Warhol first began to use the silkscreen in the 1950s and he received critical attention beginning in the early 1960s with works such as Coca Cola Bottles (1962) and Brillo Boxes (1964). While his work failed to impress the critics, he was avidly collected in Europe, Australia, and Japan. Like Claude Monet, Warhol worked in a series but rather than investigating the subtle changes of light from hour to hour like Monet, Warhol was more interested in the idea of "sameness" in such things as brand names, sizes, surfaces, and fame. He drew his subject matter from the world around him, commenting on the various people and things that made up contemporary society and the ways in which these things have an influence on daily life. He recognized that elements of urban mass society were heavily influenced by symbols, images, and mass media.
In the print Campbell’s Soup I, Pepper Pot, the viewer sees one of an extended series of large images of this famous brand of soup, a staple of most kitchen in the 1960s, Warhol exaggerates the size of the work, flattening it in the process to read more like an emblem. The larger-than-life approach speaks directly to his message about the power of products and their marketing on society. The actual soup can, signed by Warhol, is a result of the popularity of his images of this soup. He became as much a symbol of the popular culture as were the things he chose to comment upon. Therefore, there came a time in which his signature on someone else’s product was indistinguishable from his own art production. Not only did he make Pop Art but he became Pop Art.
Sean M. Ulmer, University Curator of Modern and Contemporary Art, for "A Matter of Degree: Abstraction in Twentieth-Century Art," November 10, 2001 - January 27, 2002

Subject matter
The presence of Warhol’s signature on a genuine, seemingly banal, can of Campbell’s Pepper Pot soup elevates the piece and gives it credibility as a work of art, while paying homage to his infamous Campbell’s soup silk-screens.

Physical Description
Can of Campbell’s Pepper Pot Soup with Andy Warhol’s signature in black felt-tip pen on lower left front of can.