Little Venice, One of the 'Twelve Etchings,' or the 'First Venice Set' 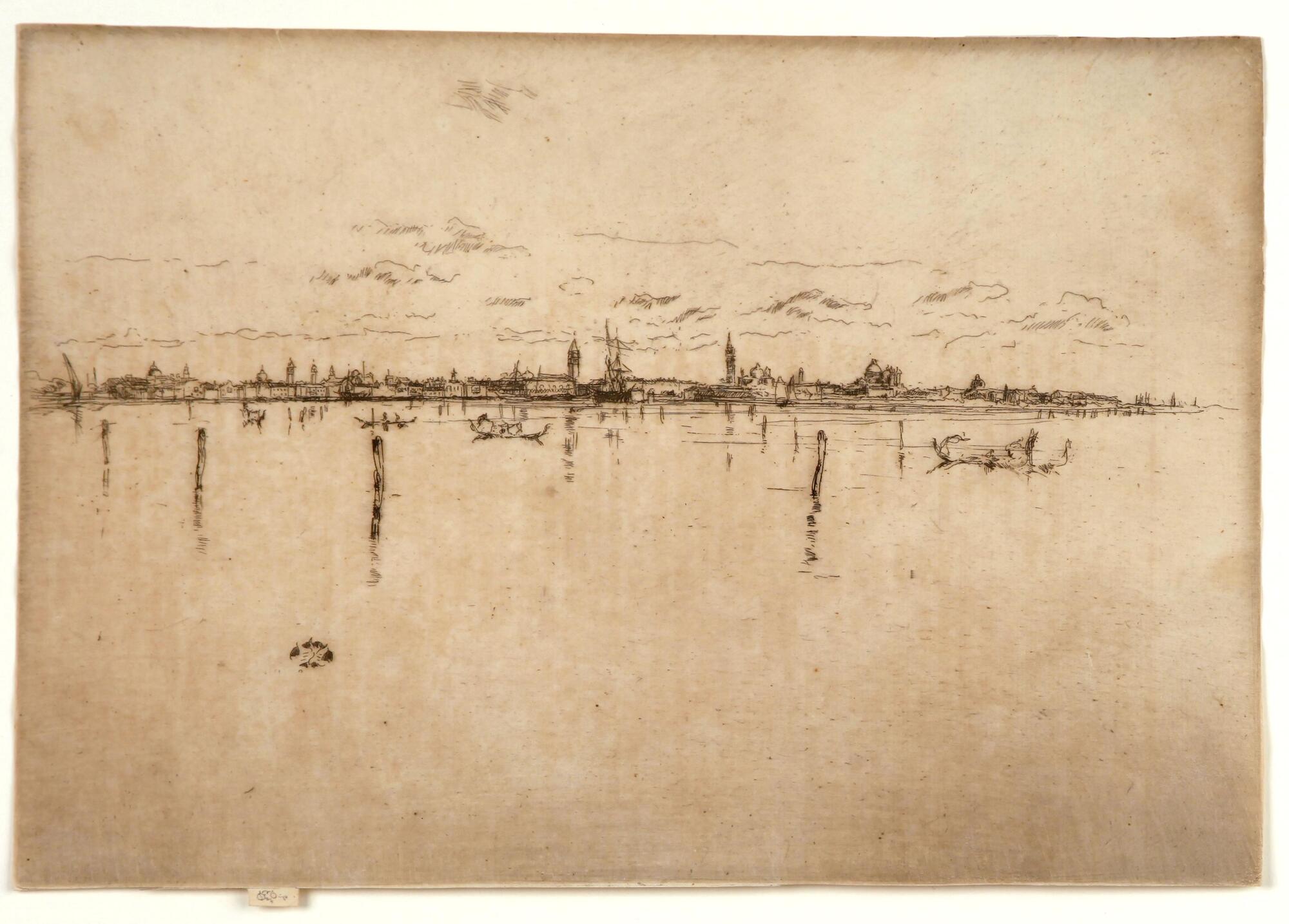 Title
Little Venice, One of the 'Twelve Etchings,' or the 'First Venice Set'

Label copy
Little Venice, from Twelve Etchings, or the First Venice Set
1879–80
Etching
Only state (Kennedy 183)
Bequest of Margaret Watson Parker, 1955/1.122
Little Venice presents the panorama of the Venetian skyline as it might be seen from a boat approaching from across the lagoon. The major monuments of the city are identifiable, if minute. Just as Whistler’s views along the Thames included dories and other small boats plying the river, so gondolas and the poles to which boats are tied up allow Whistler to punctuate the large passages of untouched copper with decorative accents that flatten the space, recalling Japanese prints. But Whistler rejects the clarity and descriptive quality of the Thames views, playing instead with the inherent tension of creating a flat decorative pattern while simultaneously conveying recession and depth.
This impression has just a hint of plate tone at the lower edge of the sheet and the margins of paper outside the plate mark are cut away, leaving a small tab at the bottom for Whistler’s signature—a practice he adopted in the Venice prints in protest against the common practice in Britain of leaving very wide margins around the printed image. Whistler viewed wide margins as a kind of aggrandizement and preferred to let the image stand forth without this presentational device. The artist Mortimer Menpes (1855–1938), who worked with Whistler as he printed the plates, said Whistler would lay the proof on a sheet of glass and carefully cut along the plate mark by hand, never using a ruler, which might give the print a hard-edged effect. He described how the artist wished “the knife to follow sympathetically the edge of the proof,” resulting in a print that was “vibrated and full of colour.”

Subject matter
Whistler rarely showed Venice in ways that would be familiar to travelers to the city. He did not focus on the principal tourist views that would include the Grand Canal and St. Mark's cathedral. This view of the panoramal of the city is shown from a distance so that the individual monuments are not immediately recognizable.

Physical Description
Seen from a distance with an expanse of water in the foreground, a city can be seen along the horizon line wtih towers, domes and sailing ships. Poles marking the channel stike out of the water and gondolas can be seen in the middle ground.

Exhibition Objects from On Beauty and The Everyday: The Prints of James McNeill Whistler
(Part of 2 Learning Collections)
High School: Realism to Abstraction
(Part of: Docent Curricular Tours)
Travel
(Part of: Exchange and Influence on Global Trade Routes)