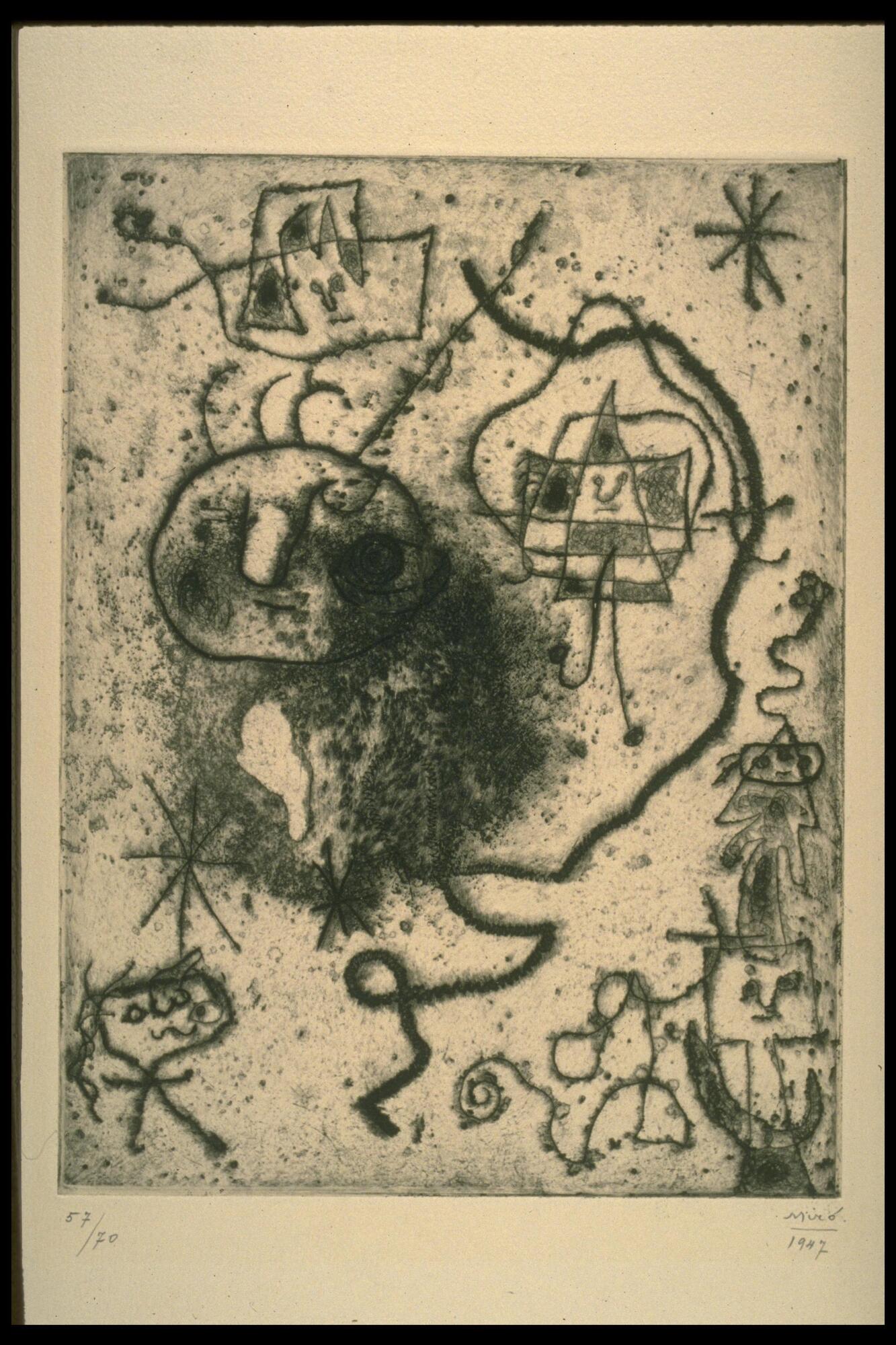 Label copy
. . . Miró . . . recreates the artificialism of the child and the primitive rather than objects designed by an adult will. A Faustian graphologist would trace back Miró’s handwriting to the caves of Altamira and the graffiti of children which have been here and there corrected by sophistication derived from Mozarabic patterns. Miró’s lines express with unrivalled assurance the wanderings of the heart.
Miró was in Palma and Barcelona during World War II. In 1947 he journeyed to New York, engraving at Atelier 17 with Hayter, with whom he had collaborated briefly in Paris in 1938 and 1939. His work in Hayter’s studio exposed him to a wider range of intaglio techniques than he had used hitherto.
Label copy from exhibition "Dreamscapes: The Surrealist Impulse," August 22 - October 25, 1998

Subject matter
This print is part of a portfolio published by Brunidor Editions, New York (the portfolio's namesake), at the request of art critic Nicholas Calas, and included seven prints from a number of prominent Surrealist artists, including: Max Ernst, Stanley William Hayter, Wifredo Lam, Roberto Matta, Kurt Seligmann, and Yves Tanguy. Calas’ introduction to the portfolio turned on the age-old controversy between line and color, in which line or form is seen as relating to thought, while color or light is considered pertinent to emotion. Calas describes not only what these artists "see" with their imaginations, but also what he as a critic "sees" as he interprets the inherent meanings of these prints.

Miró's contribution, plate seven of seven, shows a number of figures playing jump rope. Like many of his contemporaries, he met the Surrealist André Breton in Paris in the 1920s and began to engage with their ideas. The theme of this work, a girl jumping rope, can be found in a number of other works from the late-1930s and early 1940s when he was working exclusively on paper. This playful subject matter has a dark undertone, created not only by the monochromatic scene but also by the semi-grotesque figures who jump rope.

Physical Description
This etching with drypoint had a series of abstracted figures created with line. There is a large head at the center and around it there are at least five other heads/figures. Through the right-center of the page there is a strong black, winding line. In addition, there is a large starburst at the top right. The print is signed and dated (l.r.) "Miró / 1947" and numbered (l.l.) "57/70" in pencil.