Scholars Playing Go by a Waterfall 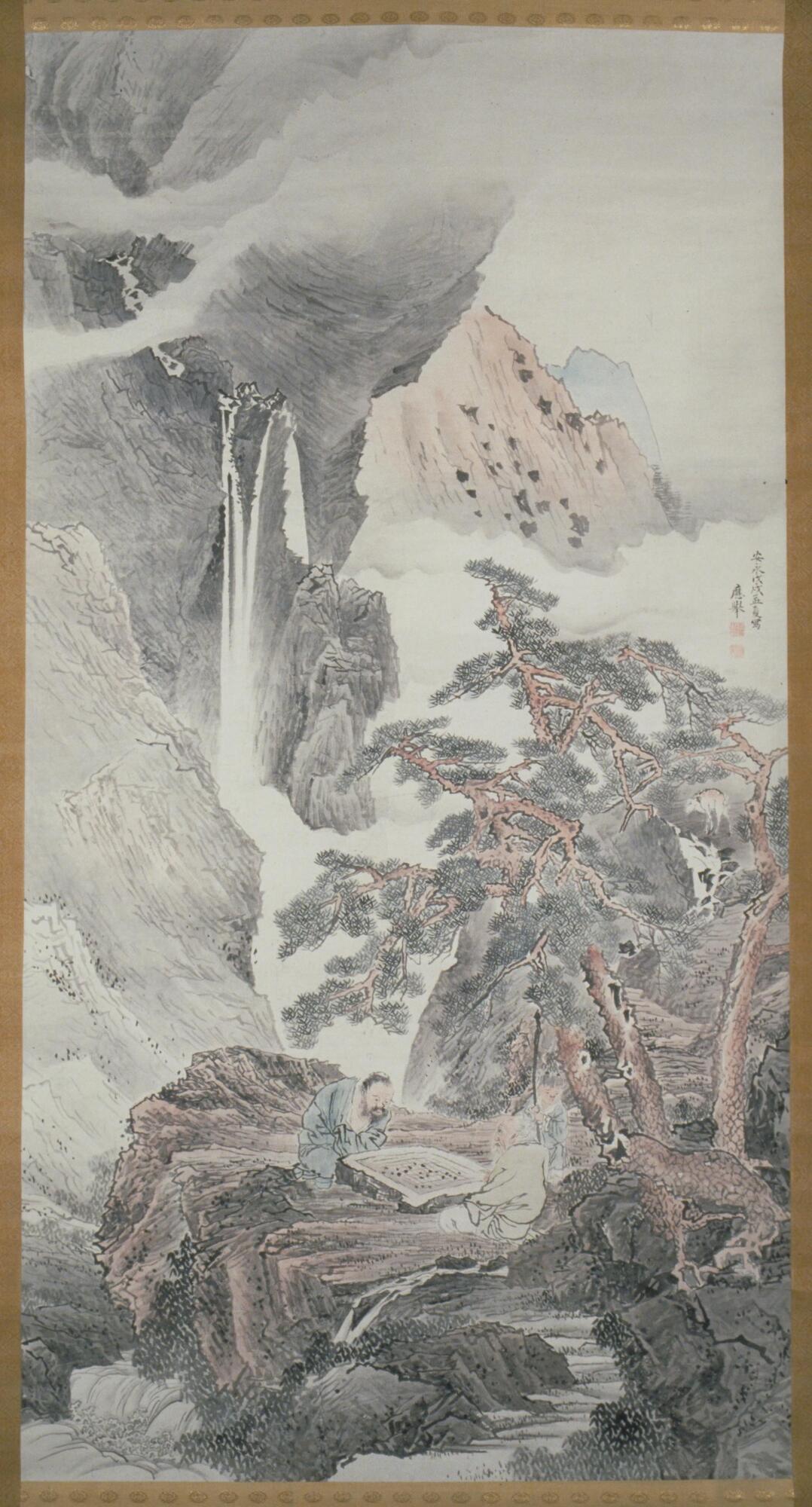 Label copy
Maruyama Okyo was one of the most famous and commercially successful painters of the eighteenth-century. He pioneered a new naturalism that was perfectly in accord with the no-nonsense taste of an inceasingly secular society and his merchant patrons. This large scroll, attributed to Ôkyo but more likely by a follower, depicts two immortals playing go (Chinese chess) within a mountain setting, attended by a boy-servant. While the white deer grazing nearby suggests a wilderness atmoshpere, the floating mists denote the mystery of the immortal land.

Subject matter
"Maruyama Okyo was one of the most famous artists of the Edo period. Okyo began his career under the Kano school painter, Ishida Yutei (1721-1786). He went on to develop a unique style based on a fusion of Kano and Rimpa styles combined with some Western influences. He established the Maruyama school of painting which gave birth to the equally large Shijo school under his disciple. Matsumura Goshun(1752-181 1). Okyo had a large number of very talented pupils who worked in manners very close to his own. The members of his own family were talented painters. and they passedOkyo's seals through several generations as treasured heirlooms. These circumstances were ideal for the production of imitations and the authentification of Okyo paintings is often a difficult problem.
The solution to the problem raised by the present painting is made easier by the existence at Higashi Hongan-ji in Kyoto of the original after which it was copied. That painting is dated 1770 during the period when he was painting for the Emman-in temple in Shiga prefecture. The style of the painting agrees well with the landscape fusuma panels that still survive at the temple. It reflects his early style, when his brushwork displayed a certain rough energy through the use of dry strokes that are angular and jagged. This type of brushwork is evident in the rocks and the pines and especially in the faces of the figures which only a few years later would be consistently depicted with smooth. curving outlines. Eight years later in 1778. the alleged date of the present painting. Okyo had already developed his mature style which demonstrates calm. clear brushwork that produces dramatic tonal contrasts unlike those found in the Michigan painting. The combination of an earlier painting that fits Okyo'sstylistic development coupled with the present landscape's anachronistic character leave little doubt that this is a copy."

"The topic of the island of immortality, Horaizan, enjoyed great popularity and was painted in many variations by followers of the Maruyama-Shijo school including such relatively recent painters as Mori Kansai (1814- 1894)..."

"The artist remained quite faithful to the model he was following. yet added something of himself as well. The jagged quality of the brushwork in the rocks and pines of the original has here been exaggerated even more. This aspect, along with the elimination of the small pine trees near the waterfall in the original. indicate that this painting was a free copy not a line-for-line tracing. The confidence of the copyist gives an assurance to the execution of the work that raises it above the level of the usual labored imitation and allows the viewer to enjoy the painting as a tribute to the style of the great master Okyo."

Adams, Celeste, and Paul Berry. Heart, Mountains, and Human Ways: Japanese Landscape and Figure Painting: a Loan Exhibition from the University of Michigan Museum of Art. Museum of Fine Arts, 1983.

Physical Description
There are two scholars playing the board game Go on a cliffside and by a waterfall. One scholar is facing toward us and wearing blue, while the other scholar is facing away from us and wearing white. There is a stone path leading down, a tree hanging above them, a mountainside in the background from which the waterfall comes from, and mist coming from the waterfall.