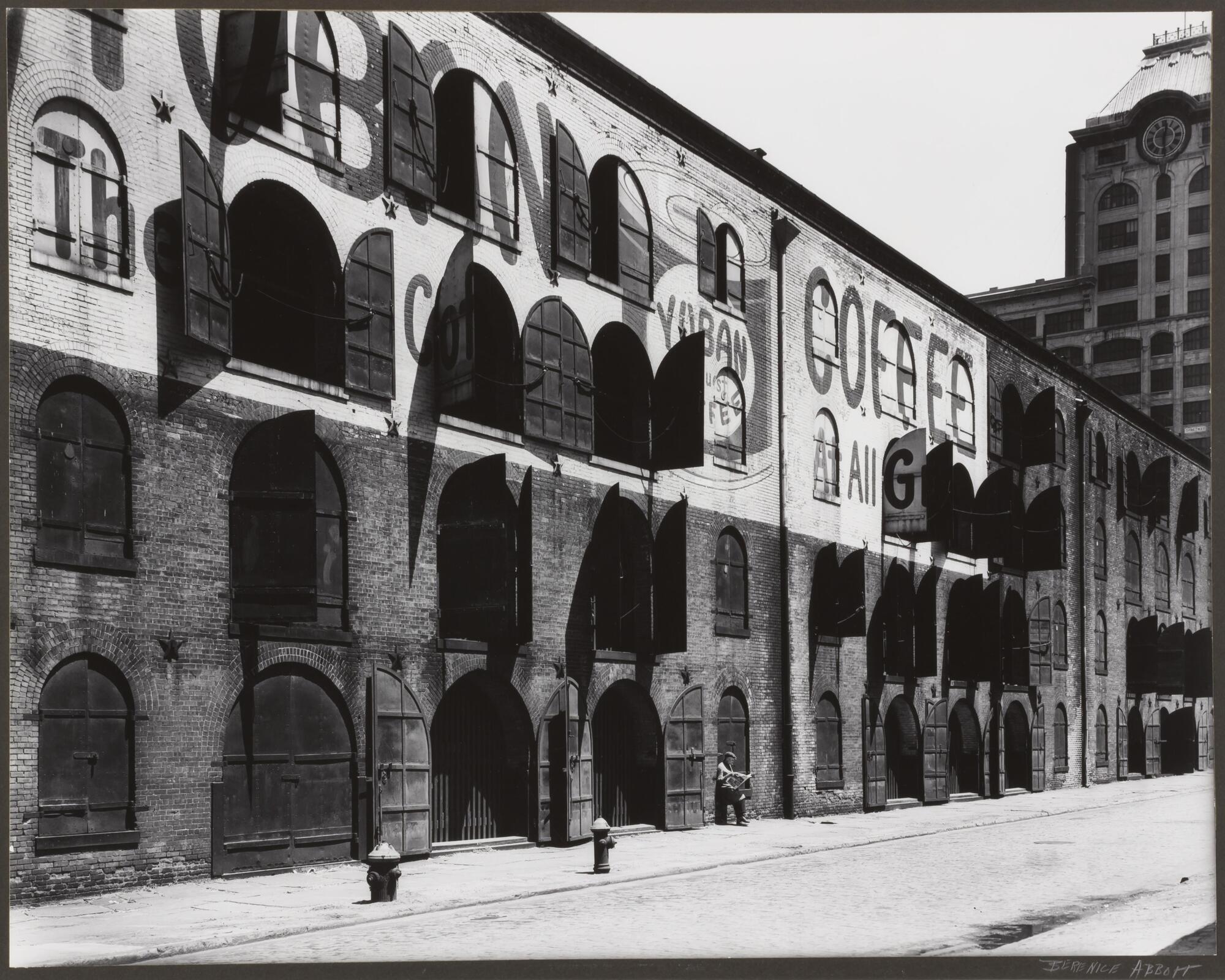 Label copy
Even though smaller, more portable cameras had recently been introduced on the market, Abbott preferred the large-format view camera because of the detail afforded by such a large negative. Photographing the City for Changing New York, Abbott frequently took a small hand-held camera in order to record ideas, but she always returned with the view camera to make the final shots. This image of warehouses captures the crisp and exacting detail that Abbott sought using the view camera. The light raking across the shutters animates the surface of the brick facades of the buildings, which appear severely foreshortened.
Located in Brooklyn under the Brooklyn Bridge, the Yuban coffee warehouse was close to where the Fulton Ferry crossed the East River to Manhattan. These warehouses, which date from the 1870s, were added to the Registry of Historic Places in 1974 and became a state park in 1978.
Carole McNamara, Assistant Director for Collections & Exhibitions
on the occasion of the exhibition New York Observed: The Mythology of the City
(July 13 – September 22, 2003)
Berenice Abbott was an artist, writer, inventor, and teacher whose work changed the course of modern American photography. Abbott had been deeply influenced by the quiet intensity in the work of turn-of-the century French commercial and documentary photographer Eugène Atget (1857–1927). Atget’s studies of the empty streets and misty parks of Paris fired Abbott’s imagination: "The city has the romantic power of its dreadful reality," she wrote of his pictures. Abbott’s "Warehouse, Water and Dock Streets, Brooklyn" is a product of the style she saw exemplified in Atget’s work. While this photograph depicts one of the many warehouses used for New York City’s important shipping industry, the work also captures the formal harmony of a common utilitarian structure whose beauty might otherwise be overlooked.
(A. Dixon, 20th Century Gallery installation, June 1999)

Subject matter
This photograph of a Brooklyn waterfront warehouse, which then housed the Yuban coffee company, emphasizes the formal qualities of the structure using a steeply receding angle. The horizontal band of paint that divides the brick structure into two halves is flecked throughout with half-opened shutters that interrupt the painted text advertising the coffee company. In the upper right corner a taller office building emerges, offering a sense of the density and architectural variety of this urban environment.