Smash hit, Good Lovin, plus Like a Rolling Stone, Slow Down, etc. 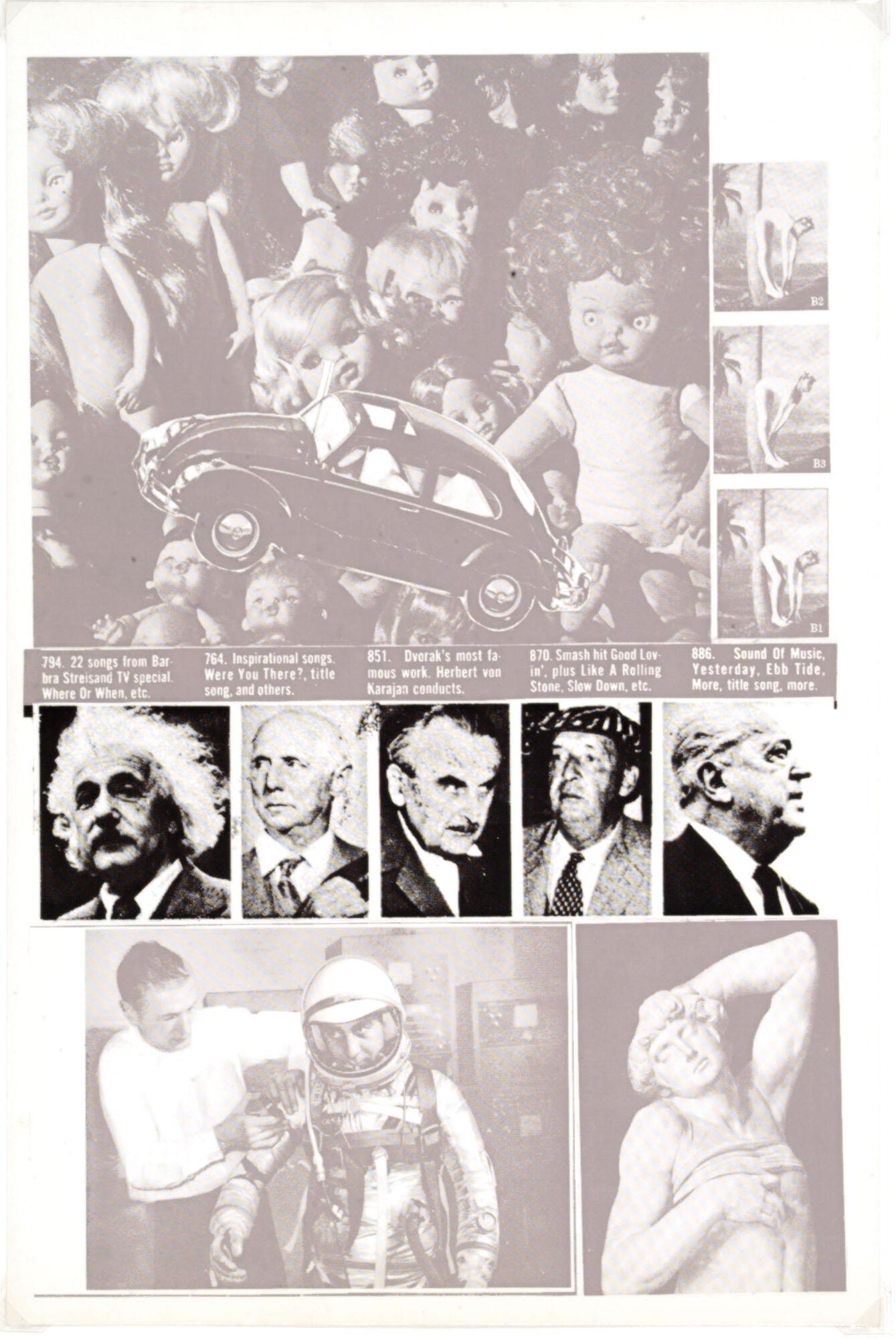 Title
Smash hit, Good Lovin, plus Like a Rolling Stone, Slow Down, etc.

Subject matter
Like many of his contemporaries, Paolozzi used screenprinting as a way to engage with modern mass media's new visual culture. At the same time, the photomechanical process made the work look mechanically manufactured rather than hand made, in the traditional artistic sense. Therefore, when he modified, transformed, assemped the source image(s), the medium would allow for a more uniform final image.

This print is one of a large series of 50 prints included in the 1970 portfolio, which was a second edition of the an earlier group of slightly larger prints titled "Moonstrips Empire News." While the first series was strictly produced as screenprints, this second series "General Dynamic F.U.N." includes works of photolithography. The themes seen in this portfolio are different in style and other Pop works of the period, but still engage with the images of a modern mass media, looking beyond just advertising and publicity images. Likewise, the title of the portfolio alludes to the General Dynamics Corporation, who was the manufacturer of the F-111 fighter used during the Vietnam War—the same one referenced in James Rosenquist monumental painting "F-111."

This work is a satirical look at the often incongruent nature of the modern psyche and its combining consumer culture, high culture and technology. For example, the text in the grey band at the center, sourced from RCA Victor Record Club advertisements selling popular records through subscription, is paralleled by images of men, including Albert Einstein. The ephemeral nature of the consumer goods are juxtaposed with great intellect and possibility of destruction in the Atomic age. This too is combined with the art historical icon and equally pop culture image of Michelangelo's Slave, who appears animated in comparison to the awkwardly constrained astronaut to the left.

Physical Description
This screenprint is in grey and black on white background. There are a variety of images and text collaged together, in three main sections. At the top, in grey, there is one large image of a group of naked toy dolls with a Volkswagen Beatle collaged over top and to the right, three smaller identical images of a man stretching against a palm tree at the beach. Below this is another section with text printed in grey and photographs of white men, including Albert Einstein on the far left, printed in black. The bottom register has two images printed in grey. On the left, there is an image of a man helping another man into a space suit with computers in the background; on the right, there is a detail of on of Michelangelo's ​Dying Slave (ca. 1513).