Resource with 15 media
Round Ceramic Plate 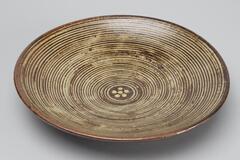 Label copy
Teabowls and other tea utensils made by highly admired tea masters or craftsmen would often be given fanciful names, and would acquire heirloom status. Works by members of the Raku family were among the most highly prized. This bowl is by the ninth generation descendant of Chôjirô, Raku Ryônyû—one of most prolific members of the family. His teabowls have a certain lightness and even playful air. This bowl can be dated to the period 1811–1834 by the stamp impressed in its foot, an extremely abbreviated form of the character for "Raku".
Exhibited in "Japanese Costumes & Ceramics, Past & Present," October 2001-February 2002. Maribeth Graybill, Senior Curator of Asian Art

Sen no Rikyû (1522–1591), tea master to Japan’s most powerful warlords in the late sixteenth century, championed the use of humble materials in the tea ceremony. Instead of expensive imported Chinese celadon or bronze flower vases, for example, he carved his own from bamboo in his own garden. Rikyû encouraged the Kyoto potter Chôjirô (1515–1592) to develop a new type of tea bowl, known as raku ware, formed by hand and fired in a simple, pit-like chamber. Chôjirô’s distinctive, thick-walled tea bowls set the standard for works by later generations of the Raku family, such as this tea bowl and UMMA 1954/1.537.
Over the centuries, three lines of tea schools directly descended from Sen no Rikyû. The successive heads of these three families often would hand-form their own tea bowls, which would then be glazed and fired by the then head of the Raku family. For an example of such a tea bowl, please see UMMA 1963/2.71, which is attributed to Sen Sôshu X, the tenth generation head of the Mushanokoji School of Tea.
From "Silk Road to Clipper Ship: Trade, Changing Markets, and East Asian Ceramics."

Rights
If you are interested in using an image for a publication, please visit http://umma.umich.edu/request-image for more information and to fill out the online Image Rights and Reproductions Request Form. Keywords
bowl