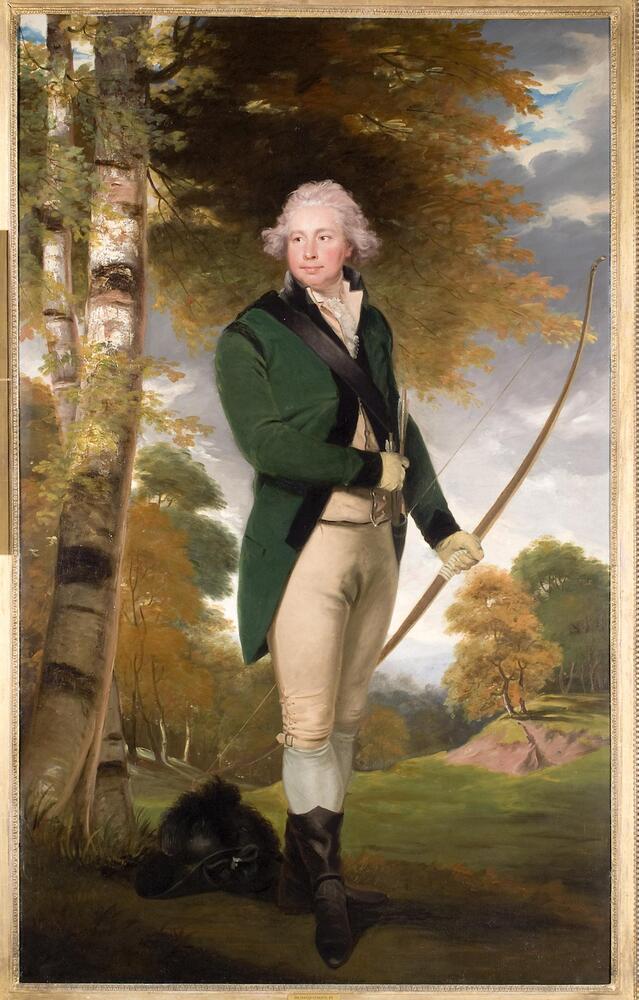 Art and taste in eighteenth century England were directed by the British Royal Academy. Founded in 1768, the Academy served as the governing body, school, and host for exhibitions of painting, sculpture, and architecture. The primary purpose of the Royal Academy was to keep track of and legitimize the artists in England. The Academy hosted annual exhibitions in London, which established the metric of taste.

One of the most important aspects of the Royal Academy was the education it offered budding artists. The Royal Academy Schools were free after a probationary period. The Academy cultivated a methodical, scholarly approach to painting that remained a convention in British art until the end of the nineteenth century. Many of England’s most well known artists, including John Hoppner and Sir Lawrence Alma-Tadema, both of whom are represented in UMMA’s collection, were educated through the Royal Academy Schools.

And Hoppner greatly benefited from this training. Born on April 25th, 1759, his mother was a German immigrant who worked as an attendant at the Royal Court, and during his youth Hoppner was a chorister in the Chapel Royal. He subsequently received attention from powerful people: “He was noticed by [King] George III as a ‘Lad of Genius’ for his drawing ability. As a result he was sent to live with the keeper of the King’s drawings and medals and given a royal allowance.” Because of this special treatment, it was rumored that Hoppner was actually an illegitimate son of the king’s, though this was never officially substantiated.

In 1775, at 19 years old, Hoppner entered the Royal Academy Schools, where he won the silver medal for life drawing in 1778. He exhibited his first work in the Academy two years later.

Upon his marriage Hoppner lost his royal allowance and thus had to take up portrait paintings to support his family. As the years progressed, his sitters grew more and more distinguished; in 1785, he painted three portraits of King George III’s youngest daughters. Ten years later, he had established himself as the principal painter to the Prince of Wales, whose residence was also at Saint James Square. His reputation ever improving, Hoppner was elected a Royal Academician in the Royal Academy, in 1795. Hoppner died in 1810 with a good reputation as a traditionalist and a true Academician.

The subject of this painting, Sir Foster Cunliffe lived at Acton Park in Wrexham, England from 1755 to 1834. He founded the Royal Society of British Bowmen and was a member of the Wrexham Yeomanry Cavalry during the Napoleonic Wars, where he served as a Major Commandant. A member of high society, Cunliffe inherited a fortune from his grandfather, who made his money in the slave trade. Cunliffe tried to hide this information from public knowledge.

Cunliffe and his elite status are conveyed in this portrait. Portraiture is not just intended to depict the appearance of the sitter, but convey something of their character and status. Portraiture was a special genre of painting reserved for upper class elite. This portrait of Sir Foster Cunliffe by John Hoppner shows Cunliffe wearing his archer’s uniform and situating him on his property. Hoppner has depicted Cunliffe in this painting in the traditional archer’s uniform (green coat, buff yellow breeches, and hessian boots). Portraiture attempted to show something of the subject’s personality. Hoppner uses a hobby to show Cunliffe’s wealth and ability to engage in sport as a pastime. This suggests that he is an active and prominent member of Wrexham society.

Additionally, the missing details indicate something about the social mores of the upper class. During a period of time that was undergoing a great deal of social tumult and restructuring, the absence of any workers in the painting showed that from the elite perspective, there was a disdain for the working class.