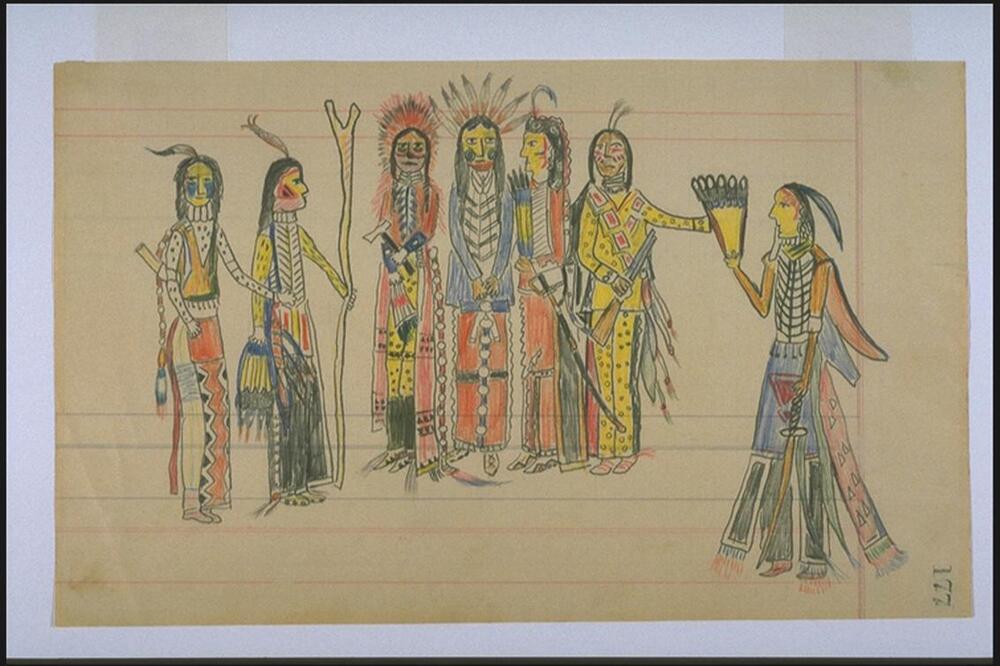 While we cannot connect the drawing Untitled [Seven Kiowah Men] to a specific historical person, we can make several deductions about who he may have been. Plains societies usually granted men the right to pictographic forms such as ledger art, hide and tipi paintings, and winter counts or calendars. These objects all told stories through their visual elements, though each was used differently: ledger art was often carried, stored, and shared in book form; painted hides were worn on the body or hung in homes; external tipi paintings depicted the honor marks of the tipi's warrior owner; and winter counts or calendars recorded tribal histories and were passed down generationally over time. 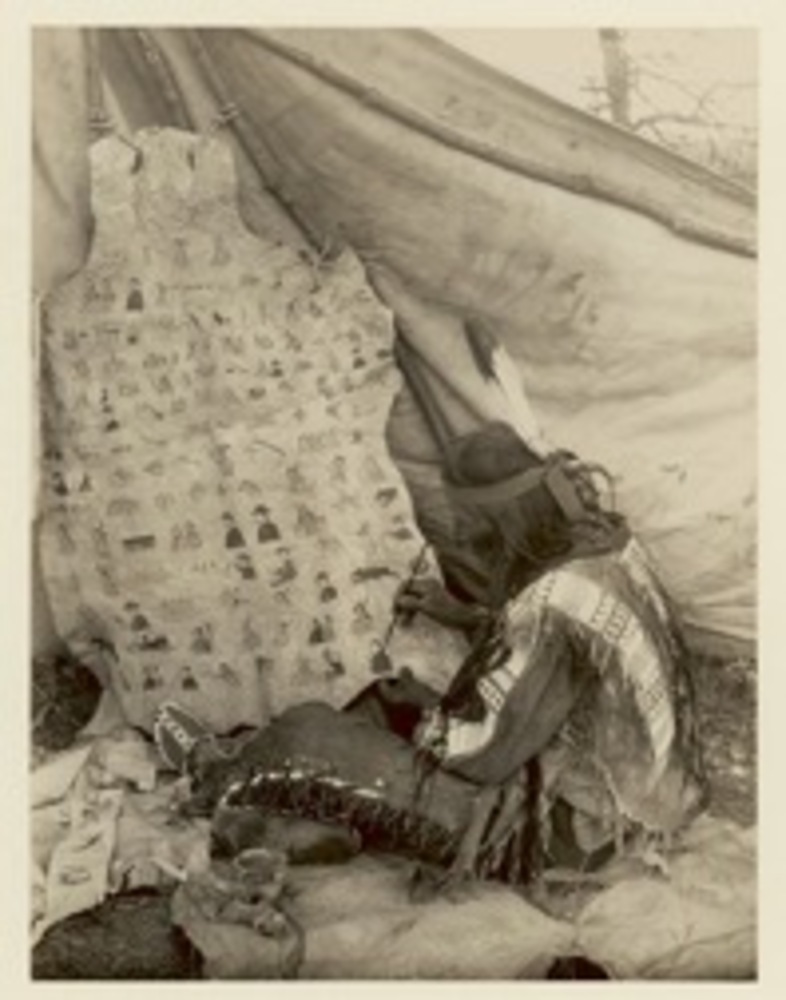 Within this group, the rights to various forms were often assigned to various age societies; most ledger artists were warriors, often below the age of thirty. It is thus common to refer to creators of ledger art as warrior-artists. And since the majority of ledger art was autobiographical in some way, we can guess—though we cannot be sure—that the original warrior-artist was a young Kiowa man.

Untitled [Seven Kiowah Men] was originally drawn within a ledger book, a pre-printed and bound book whose lined pages and columns were used for a variety of functions within non-Native societies. The earliest ledger art was drawn in books that Native warriors captured from non-Native soldiers on the battlefields. These books seem to have circulated among members of warrior societies, and it seems a common practice to have shared a single book's making between multiple warrior-artists: sometimes single drawings bear elements by multiple hands.  The media used in making the drawings depended on what was available, but appears in all cases to be non-Native drawing materials such as graphite, colored pencils, watercolor, or crayon.[1] This particular drawing involves colored pencils and graphite. In later periods, ledgers could be purchased at trading posts or were handed out in classrooms or prisons for educational purposes. In some cases, military figures or social reformers gave ledger books to Native warrior-artists with the express purpose of having them fill its pages with drawings. Because UMMA's drawing has been removed from its original book and nothing is known about its previous owners, we do not know the context in which this ledger drawing was made.

Early ledger art was shared among warrior-artists to express a warrior-artist's honor marks.[2] Such honor marks were earned in battle or times of danger. These marks then determined a warrior-artist's status within his Native community, and they often corresponded to material culture elements worn by the warrior, such as feathers or fur. Many ledger book drawings record the events or the visual elements by which a warrior earned and marked his honor. Untitled [Seven Kiowah Men] records the material honor marks in detail for its depicted seven warriors.

This drawing presents a group of seven male figures who stand before the viewer; the majority peer back, while several appear in profile. Heavy detailing and color mark each man's dress and war paint. Faces and hands, however, are placed through a few well-placed lines. Early nineteenth-century pictographic figures of Plains warrior-artists did not usually utilize facial features or details like fingers, as the identities of those depicted came through displayed honor marks and tribal elements rather than likeness.[5] Ledger art continues this emphasis and way of reading its depicted bodies.

While there are many visible elements of dress, each of which carries their own associated values and meanings, I will describe but three. First, the large non-colored circles along colored stripes, present on three of the men, represent sets of hairplates made with flattened disks of German silver, though two of the three men attach their plates to their leggings (Figure 1, below).[6] Kiowa peoples highly valued German silver metalwork, and such hairplates were commonplace items among Kiowa warriors. This is one of the elements by which we can identity these men as Kiowa. 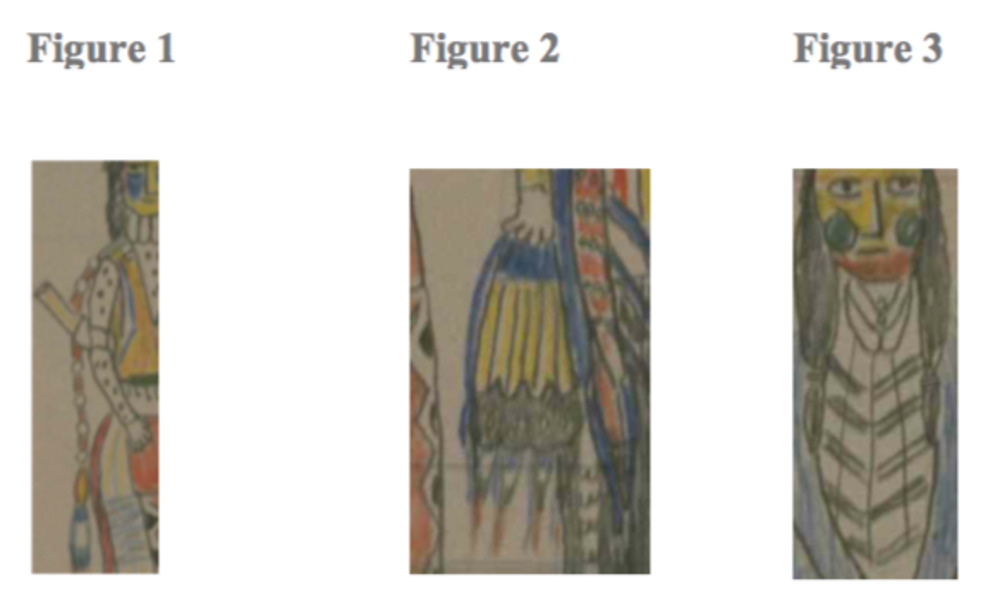 Two other visible elements are turkey or eagle feather fans (four in number; Figure 2), and bone hairpipe breastplates (also four in number; Figure 3). Animal bones or horns were polished and hollowed to form long beads that were then strung together to form breastplates, a common warrior element that could be worn into battle. Bone hairpipes may also be present on some of the men's neck collars. Turkey or eagle feather fans were highly regarded items that often marked leadership positions. They were not taken into battle, but were carried when shows of prestige were important.

The bracketed title phrase, "Seven Kiowah Men," was the title given to the drawing by the dealer who sold the work to Daniel and Harriet Fusfeld, collectors who in turn later donated the drawing to UMMA. The brackets are a helpful reminder of the uneasy relationship between non-Native collections and categories, and Native-created images and objects. Ledger art, for instance, is often categorized as folk art, or art made by untrained artists. Yet in Native communities, young men were often initiated into their roles and skills by their elders. The term "artist" is also suspect, in that most warrior-artists historically fulfilled complex communal roles that did not involve the professionalism or market exchange by which we usually define today's artist.

Ledger drawings are particularly rich visual resources to use in teaching, due to their complex relationships to historic Native cultural practices, reading and writing, warfare and violence, and social policies aimed at transforming or destroying Native cultures.

Colin Calloway’s recent volume is the first in which a number of authors, who do not necessarily agree with each other, attempt to read ledger art across a multitude of topics and disciplines, from prison reform to art history and anthropology. The effect is to open up ledger art as historical sources that can inform a wide variety of texts and investigations into Native histories, cultures, experiences, and visual practices.

- Have students choose an essay from Calloway’s volume and read it with an eye toward interpreting Untitled [Seven Kiowah Men]. Students can then report their readings back to the class. Did their chosen essay change how they viewed UMMA’s object, or open up new routes of interpretation? Why or why not?

By the end of the nineteenth century, Native art classes were integrated into Native boarding school curriculums across the United States (see Hutchinson, Chapter 2). Ledger art was one of many Native forms used in these classes. A series of 36 drawings by Kiowa schoolchildren at the Rainy Mountain Boarding School (western Oklahoma) in 1899 is in fact held at the Bentley Library here at the University of Michigan (part of the Hilon A. Parker papers).

- Arrange a viewing, and compare these images to Untitled [Seven Kiowah Men]. Discussion topics can include the connections between Native ledger art and school pedagogy, and the changes or similarities visible between these varied examples; Native art in connection to cultural identities; and the appropriation of Native art forms within colonial education contexts.

Ledger art can be connected to both Native written pictographic forms and the imposition of non-Native bureaucracies through the form of the ledger book. See, for instance, Anna Blume's essay on ledgers (in Berlo) and Petersen's explanations of ledger art in relation to hide and tipi painting and pictographic letter writing (Chapter 2). How do these two lineages inform what we are seeing in Untitled [Seven Kiowah Men]? How can we situate the work in relation to each?

If students have no familiarity with the iconographies found in ledger art, it can be a useful exercise to have them "decode" the visual elements in Untitled [Seven Kiowah Men] using Petersen's Pictographic Dictionary (Appendix, section III)—though keep in mind that this drawing may or may not exactly match the visual vocabulary and meanings that Peterson compiled from the specific works that came from Fort Marion.

- How do visual elements of ledger art relate to cultural meanings?

- How can we relate these elements and meanings to the historical persons depicted?

[1] I do not know of any cases in which Native inks or dyes or charcoal sticks have been identified as media for ledger art, but I also do not know if any chemical analyses have ever been conducted on ledgers to confirm that these Native media were never used by warrior-artists.

[2] Later ledger art could also include depictions of contemporary experiences or tribal customs.

[3] Good sources for exploring St. Louis history include Shirley Christian's nonfiction account of the Chouteaus, a French émigré family who founded St. Louis and ran major fur trade and trading companies out of the town through the mid-1860s [Before Lewis and Clark: The Story of the Chouteaus, the French Dynasty That Ruled America's Frontier (Lincoln: University of Nebraska Press, 2004)], and, for primary sources on the region's role in both the French and Spanish North American empires before the area entered the U.S. under the Louisiana Purchase (1803), A.P. Nasatir's edited volumes [Before Lewis and Clark: Documents Illustrating the History of the Missouri, 1785–1804, 2 vols. (Lincoln: University of Nebraska Press, 1990)].

[4] There is no single Métis culture for children of mixed Native/non-Native parentage. In and around St. Louis, a Métis individual's social identity largely depended on whether the individual resided within and thus identified with either their mother's indigenous culture, or their father's non-Native household. In other locations in the Plains, especially in what is now Minnesota, North Dakota, and the fur trading regions that stretch from the Great Lakes to Hudson's Bay, distinct Métis cultures and communities did develop, with some continuing today.

[5] Sometimes (though not present here) an individual in a ledger drawing might also be identified through their name pictograph.