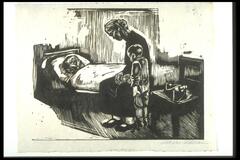 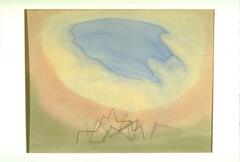 Label copy
The Thames
1896
Lithotint with scraping on a prepared half-tint ground
Third state of three (Way 125; Chicago 161)
Bequest of Margaret Watson Parker, 1954/1.463
The Thames is considered one of Whistler’s most accomplished lithographs, and in many ways is a summation of ideas first explored in his printmaking two decades before. It was drawn on a lithographic stone with a prepared half-tint ground, the same process used in Whistler’s views of the Thames from the 1870s, and recalls the atmospheric nocturnes of London and Venice that he produced in those years. The bridges and buildings on the far bank of the river seem suspended in mist and the failing light of late winter. Whistler further dematerializes the scene by obscuring the roadway of the Embankment at the bottom of the image by visually breaking up the depiction of the road, replete with hansom cabs and pedestrians, with a screen of leafless tree trunks.
The views of London executed during Whistler’s wife’s decline have a very private character, and they assume an elegiac poignancy. Whistler sought both treatments and new locations in an effort to make Beatrix more comfortable as her illness progressed, remaining by her side and sketching views from their balcony overlooking the sweeping curve of the Thames. When her condition permitted, Beatrix’s bed was moved near the windows so that she, too, could take in the bustle and life of the city and river. Beatrix finally died in May of 1896; Whistler lived to see the new century, dying in 1903.

Subject matter
This view of London from the top floor of the new Savoy Hotel brings together many of Whistler's precepts about art. The flatness and division of the vertical format into horizontal strata shows his affinities with Asian art; it is a nocturne--Whistler's great signature subject; as his work was always evolving towards nuance, effacement of details, and understatement, this lithograph must be reckoned as one of his great achievements as a printmaker. It also recalls the transformation from the quotidian to the beautiful that is the aim of the artist as Whistler described it in his "Ten O'Clock" lecture in 1885:
"And when the evening mist clothes the riverside with poetry, as with a veil, and the poor buildings lose themselves in the dim sky, and the tall chimneys become campanili, and the warehouses are palaces in the night, and the whole city hangs in the heavens, and fairy-land is before us—then the wayfarer hastens home; the working man and the cultured one, the wise man and the one of pleasure, cease to understand, as they have ceased to see, and Nature, who, for once, has sung in tune, sings her exquisite song to the artist alone."

Physical Description
This work portrays a view across a river, whose surface is dotted with shipping. Drawn from a very high vantage point, a roadway is seen through a screen of nearly leafless trees at the bottom of the image; in the distance the far bank of the shore is congested with buildings, some towers--particularly a large one to the right of center--and smoke blowing away and to the right from the viewer can be seen.