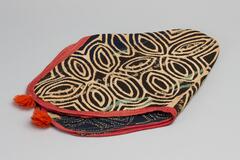 Label copy
In west Africa, long distance trade and the historic expansion of empires have helped to spread artistic ideas and designs across the region, so that a single object—such as a hat—may well bear influences from several different cultures. Peaked (or miter-style) hats are found in many parts of west Africa. This hat’s color and embroidery suggest it may have been inspired by a type known in the Mande language as bambada, or crocodile’s mouth, named for the lateral tapers that resemble the open jaws of a crocodile. Its red color symbolizes blood and power, though the meaning of the delicately embroidered figures—one humanlike, possibly in costume, the other a long-tailed creature—remains unknown. The character and fine stitch work of these figures resemble that of Manding embroiderers, who were often commissioned to decorate the gowns and tunics of peoples throughout the region. Alternatively, this hat also resembles a style worn by men in western Cameroon, which was strongly influenced by Hausa fashions brought by traders from northern Nigeria in the late nineteenth century. Such movement and mixing of aesthetic ideas over time and space leave us speculating as to the absolute origins and meaning of this intriguing hat.

The elliptical whorls of appliqué found on the second hat place it in western Cameroon, where fashion dictates that no man of status and propriety moves in public without covering his head. This type of hat was reserved for chiefs and elders to denote their authority. Its style of appliqué is influenced by Hausa aesthetic ideas.

Subject matter
In the Grassfields region of western Cameroon, his type of hat was reserved for chiefs and elders to denote their authority. Its style of appliqué is influenced by Hausa aesthetic ideas.

Physical Description
Thisi is a miter-shaped hat with a double layer of fabric made from whorls of light-colored cotton applique on dark green velveteen ground. The sides of the hat terminate in red tassels. The front edge of the hat is trimmed with red fabric.

Rights
If you are interested in using an image for a publication, please visit http://umma.umich.edu/request-image for more information and to fill out the online Image Rights and Reproductions Request Form. Keywords
prestige
social status
symbols of office or status
wealth