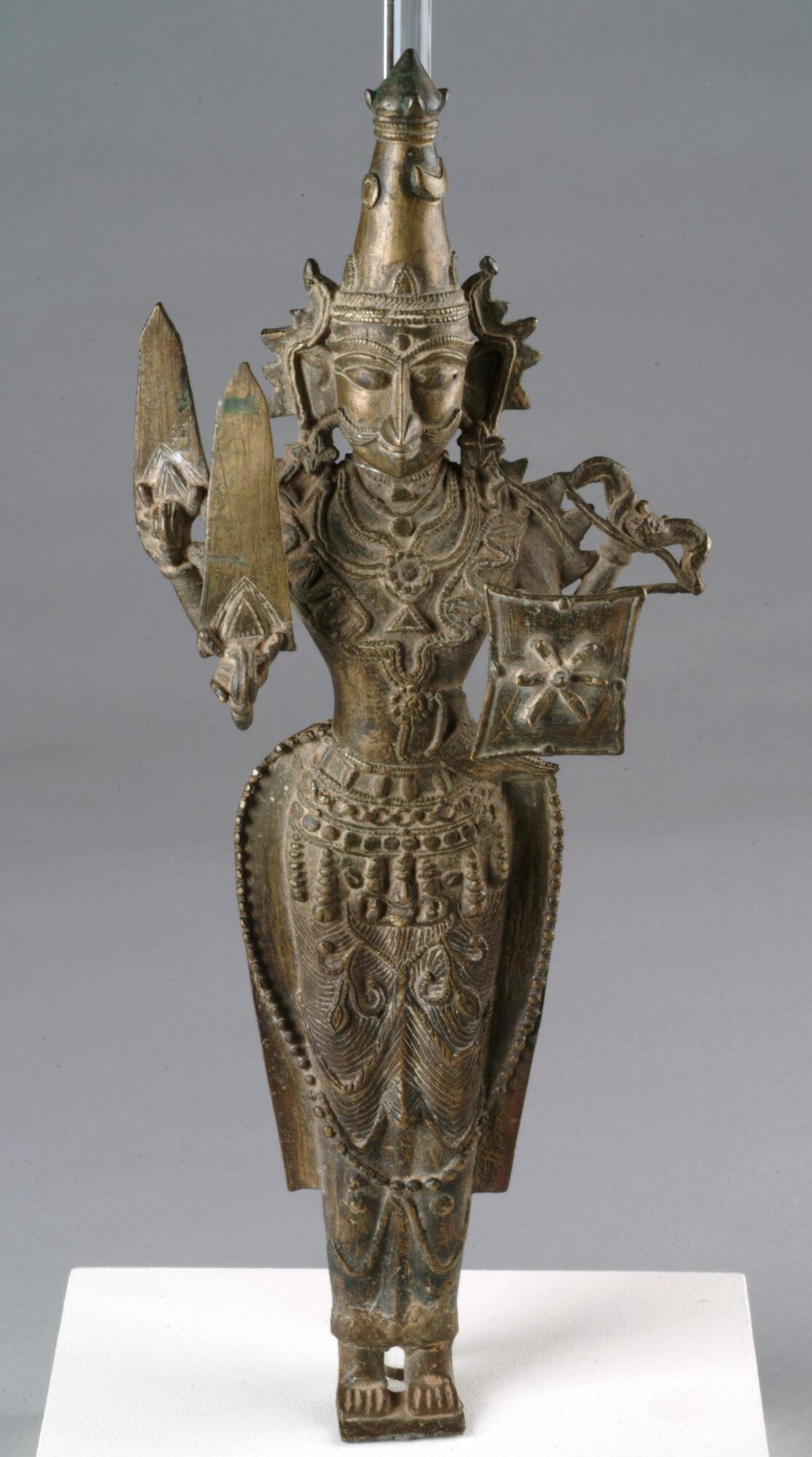 Label copy
March 28, 2009
The form and attributes of an Indian image—its posture, gestures, and hand-held objects—provide a physical body for the deity that represents its essence. Within this context, stylistic variations might be viewed as a form of adornment, much like the real garments and jewelry that worshipers place upon bronzes taken out in ritual procession. The style expressed in these two bronzes is unique to the region of Pudukottai in Tamil Nadu, India’s southernmost state. Both figures are represented in a stiff, vertical pose with straight legs bound closely together. The pair’s symbolic features are reduced, yet they may be identified by Parvati’s skull cap, which refers to Shiva’s ascetic nature. Here, Shiva bears general weapons—two swords, a bow, and a shield—and is draped in a feast of jewelry laid out in rhythmic waves against his body’s elongated surface. Parvati is presented in a strict, unbending pose that echoes her partner’s vertical form. Though her jewelry is simple, great attention has been devoted to the weblike belt that falls from her waist to settle gracefully against the fishbone striations of her skirt.
(Label for UMMA South and Southeast Asia Gallery Opening Rotation, March 2009)

Subject matter
Unlike the elegant and courtly figures of Shiva and Parvati produced in northeast India six centuries earlier (also on view in the exhibition), these two figures bristle with a fierce energy. The style seen here is unique to the region of Pudukottai in Tamil Nadu, in the far south of the subcontinent. There are many such guardian figures with sword and shield found throughout the south in both metal and terracotta; this pair can be identified as Shiva and Parvati by Parvati’s small cup, probably a kapala or skull cup, which refers to Shaivite ascetic practices.

Physical Description
Shiva stands on a tiny base with little feet in a strict unbending stance. The body is elongated with a small waist, the hips billowing out and tapering in a stylized way to the feet. He has broad shoulders and has four arms. Reading in a clockwise direction from the right front hand, he holds, a sword, another sword, a bow and a shield. He wears a lot of jewelry, necklaces that cover his entire chest, at least three belts with pendant decorations and what appears to be a bustle like garment that billows out from his waist and has a beaded border that curves down across his legs below his knees. He wears large earrings and a crown decorated with a disk for the sun and crescent for the moon. He has large wide opened eyes and what almost looks like two sets of eyebrows, a dot where his third eye should be and a luxurious moustache.