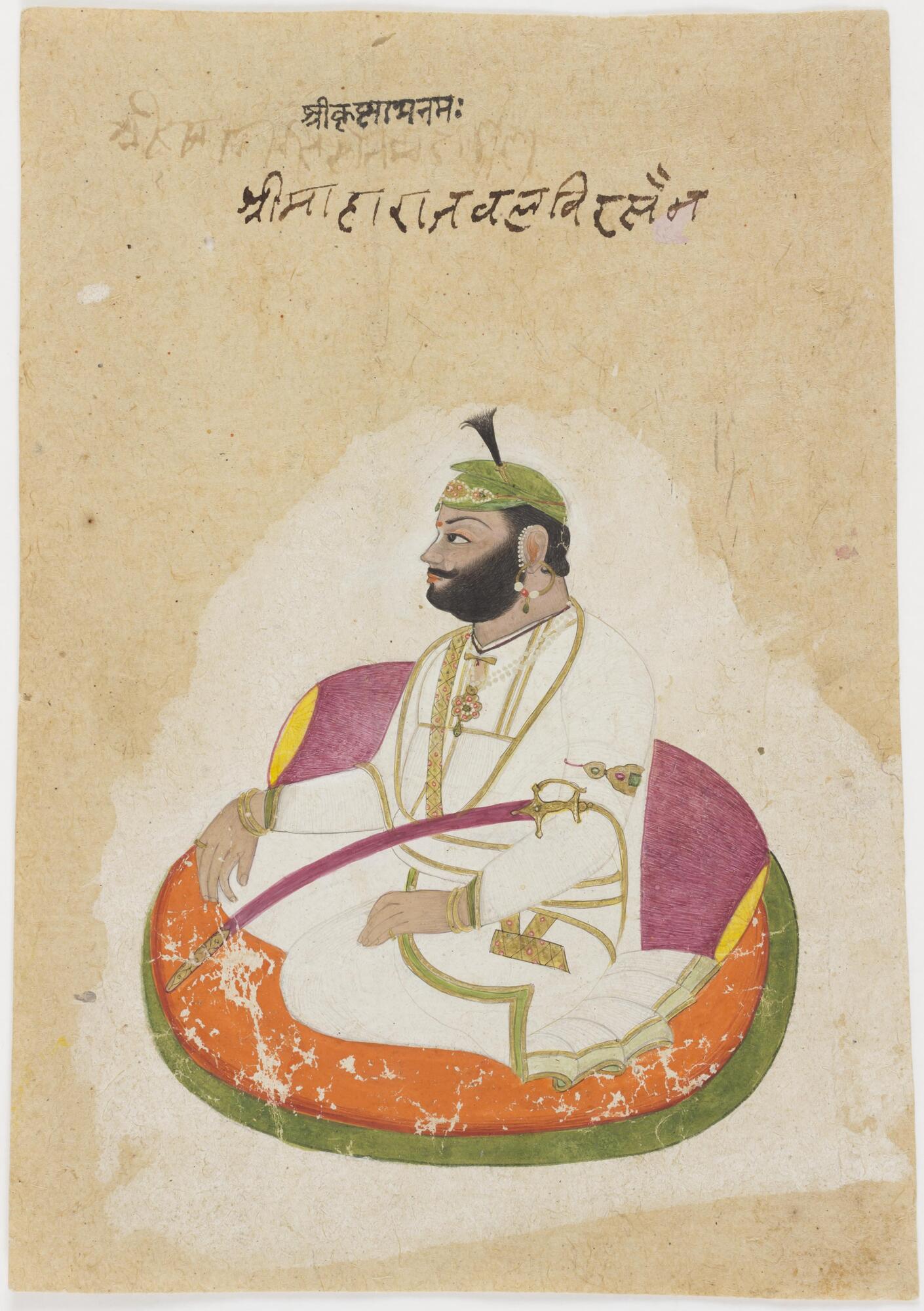 Label copy
March 28, 2009
Balbir Sen (ruled 1839–1851) was born into a family that governed the small state of Mandi in the foothills of the Himalayas from the early sixteenth century. In this colored drawing the Maharaja is presented in strict profile with a heavy black beard and mustache. Gold jewelry encrusted with emeralds and rubies enlivens the flat surface of the ruler’s simple white robe. Like his long sword and feathered turban ornament, they indicate his elevated rank and may have been received as gifts from other Indian courts.
The picture’s format is borrowed from Mughal royal portraits. Since royal authority was expressed to competitors as well as one’s own subjects, the efficacy of royal propaganda was dependent upon its legibility across courtly environments.
(Label for UMMA South and Southeast Asia Gallery Opening Rotation, March 2009)

Subject matter
Balbir Sen (ca. 1817–1851; r. 1839–1851) was born into a family that had ruled the small state of Mandi, in the foothills of the Himalaya, since the early sixteenth century. In this portrait he is shown seated on an orange rug, with a purple bolster pillow at his back. He is dressed in simple white robes, with only a few appurtenances of rank: a sword, a few pieces of modest jewelry, and a perky feather in his turban. Without resorting to fussy detail, the artist has convincingly portrayed a distinct personality. Although the almost geometric shapes create a flat pattern, there is nonetheless a sense of mass to the figure.

Physical Description
Balbir Sen of Mandi sits with his legs tucked under him against a purplish bolster on an oval orange carpet with a green border. He wears a white garment with green borders and some jewelry: a ring, bracelets, an armlet, necklaces, earrings and wears a green turban with a turban jewel across the front, surmounted by a black feathered aigrette. A sword signifying his rank lies across his body. He sits in strict profile with a heavy black beard and mustache. The paper is plain and uncolored except around the figure, which is painted against a white wash taking the shape of the seated man and his setting.
Inscriptions in devanagari script are above the painting.