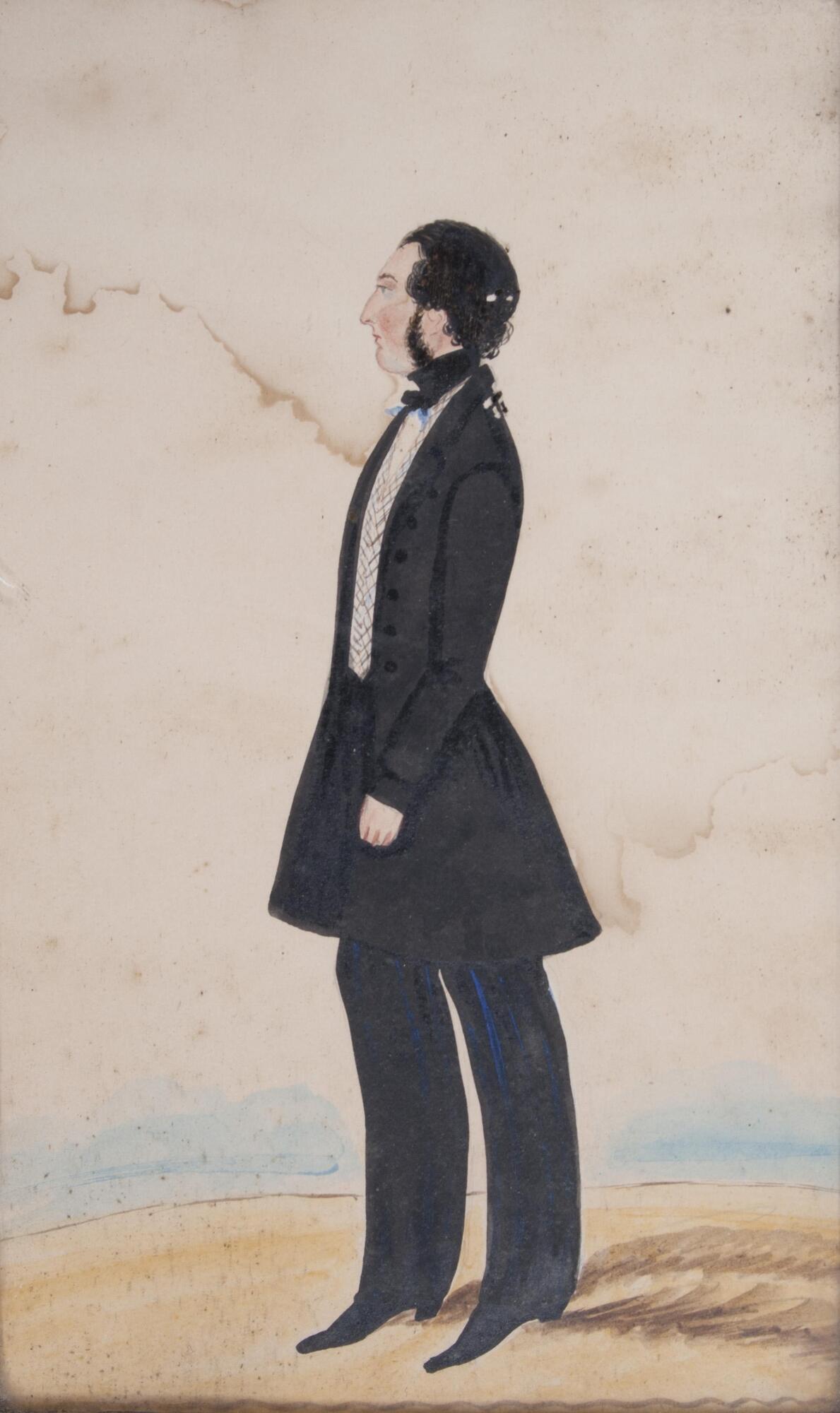 Title
Portrait of a Man

Medium & Support
watercolor with pen and ink, and graphite underlay on cream paper

Label copy
Jacob Maentel
United States, 1763–1863
Portrait of a Man
1809–20
Watercolor with pen and ink, and graphite underlay
Portrait of a Woman
1809–20
Watercolor with pen and ink
Gifts of the Daniel and Harriet Fusfeld Folk Art Collection, 2002/1.188 and 1.189
Jacob Maentel was a German immigrant who painted portraits for his family, neighbors, and acquaintances in the German-American communities around Lancaster, Pennsylvania. Maentel was a self-taught artist whose work became more sophisticated over time. In early portraits such as these, Maentel posed his full-length sitters in profile and outdoors, but by the 1820s he had learned how to paint his sitters from the front, surrounded by interior environments. Maentel’s many surviving miniature portraits demonstrate how his sitters began to hang their framed miniatures on walls—a change from earlier centuries, when miniatures had been valued as jewelry and worn.
(Out of the Ordinary, 2010)
Throughout his life, Jacob Maentel had several careers, not only as a painter but also a farmer and a physician. Born in Kassel, Germany he served as a solider and a secretary under Napoleon. It was during his time in Germany that he obtained his physician’s license. Sometime during the 1830's Maentel emigrated to the U.S. where he and his wife became part of the Harmonist movement. This new community was something similar to the Amish communities; both communities were guided by religious beliefs held by the occupants and everyone worked for the community as a whole. Maentel would remain here until his death.
Maentel painted portraits usually depicting the sitter in profile as was the fashion. "Maentel endowed his rural subjects with tiny feet and narrow bodies so that the costumes and profiles might be dominant against diminutive pastoral landscapes" art historian Mary Black commented. The profile portrait follows this formula. The figures are dainty and appear fragile with tiny features. The costumes are simple and quiet, and the backgrounds are subtle, subdued landscapes. In Maentel's portraits there is not any strong sense of individuality or emotion among the subjects. All subjects are similar in appearance with common features and characteristics. Occasionally there are some personal elements added as to the identity of the sitter. Due to his simple, direct style, Maentel’s works remain easily recognizable.
Denise Patterson
Modern and Contemporary Intern
2002