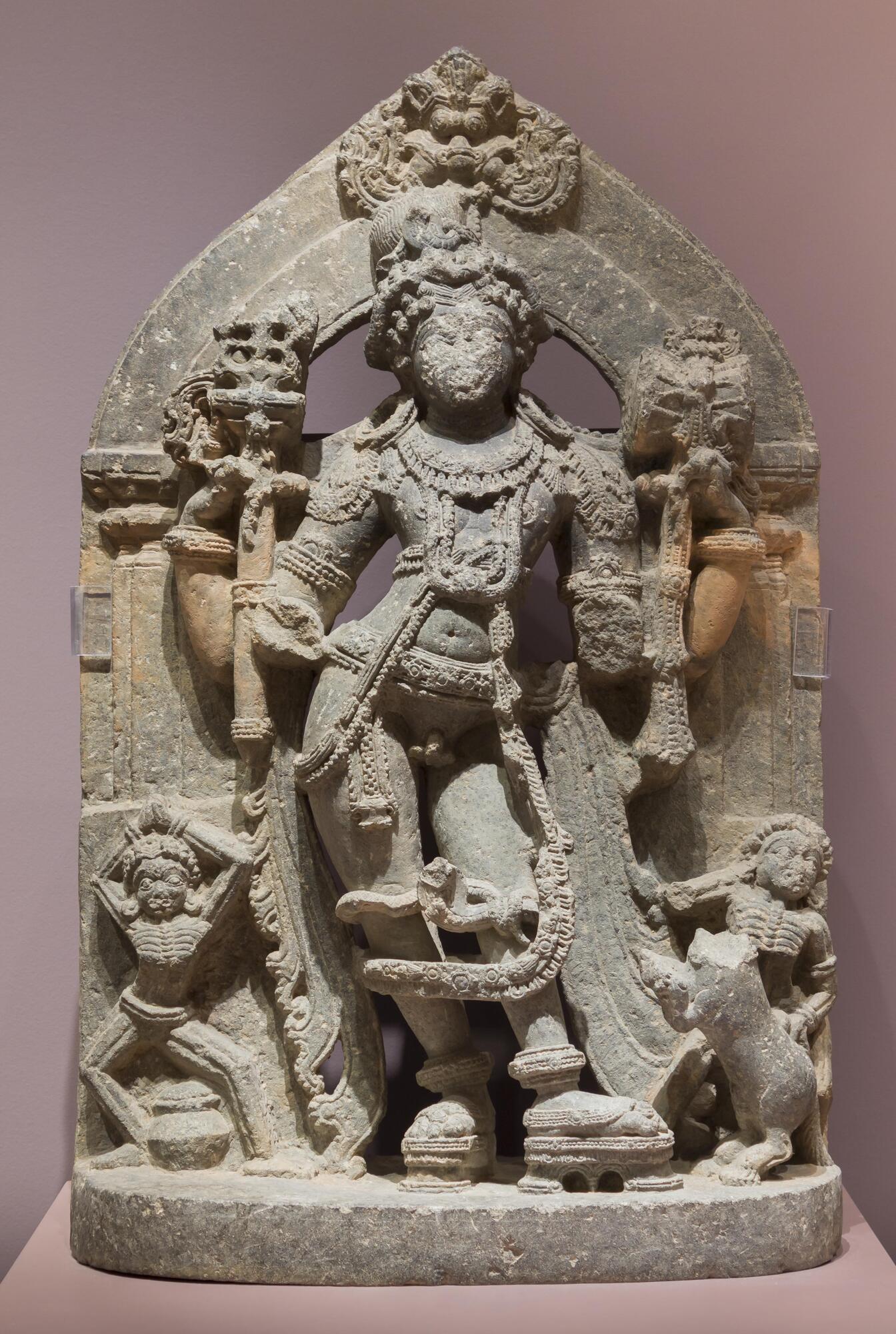 Label copy
March 28, 2009
A cremation ground provides the stage for this paradoxically light-hearted image of Shiva’s terrible aspect Bhairava, who killed the god Brahma in a rage. The macabre context, indicated by emaciated ghosts at Bhairava’s feet, reminds viewers of the sin for which he was condemned to wander the earth in a terrifying and terror-stricken state. Bhairava carries a cup made from the skull of Brahma in his hand (one of two broken off in this sculpture). Transformed into his begging bowl, the cup identifies Shiva’s role as an ascetic—one who renounces the world and endures physical and psychological hardships to achieve spiritual transcendence. Shiva’s sensuous pose and levity communicate his liberation as a result of contemplating death in his lone wanderings through vast cemeteries.
(Label for UMMA South and Southeast Asia Gallery Opening Rotation, March 2009)

Subject matter
Bhairava, or “the Terrible,” is an epithet for Shiva in his fiercer manifestations. One of these is Lord of the Cremation Grounds, a setting indicated here by the small, emaciated demons at his feet. In his rear arms he holds a trident—his signature weapon—and a small drum. His two front hands have broken off, but as in other icons of this type, they would have originally carried a sword and a cup made from a human skull. This particular image adds a further element: it depicts the immediate aftermath of Shiva’s great sin of decapitating Brahma, another of the major Hindu gods. In his left hand he holds the ends of Brahma’s long hair, but Brahma’s head—which was carved completely in the round—has broken away. Below, a dog leaps up to lick the blood dripping from the severed head. Shiva was condemned to wander for twelve years as a naked ascetic in expiation for this horrible crime. Although the image has suffered from wear, the special character of the Hoysala period style comes through in the humor and naturalism of the skeletal figures, and the relaxed yet elegant pose of Shiva himself.

Physical Description
Shiva as Bhairava stands against a plain pointed arch supported by pilasters with a kirtimukha or face of glory at the top. He stands in a trihanga pose, with his hip thrust to his right and wears platform sandals. He originally has four arms, the front two of which are broken away. His back two arms hold a decorated trident and a drum. He would have held a sword in one hand and a kapala, a cup made out of a scull and a hanging severed head in the other. He is naked, but wears much of jewelry including belts with pendant elements, anklets, armlets, bracelets, necklaces, a band just under his breasts and large circular earrings. He also wears a decorated sacred thread over his left shoulder. His has an elaborate coiffure in curls around the top of his head with a large topknot to one side. His face is badly damaged. Emaciated hungry ghosts attend him, the one to his right dancing with his hands raised above his head with a pot between his legs. The ghost who is on his left stands behind a dog, whose head has broken away. The ghost and the dog would have been playing with the absent severed head, adding to the ghoulish nature of the image.