Part of: Heart Silent in Respect for Truer Vibrations (35 resources )
| 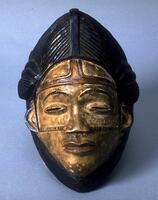 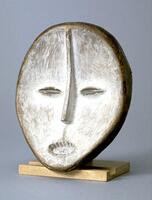 Subject matter
To commemorate and honor deceased rulers or prominent individuals, Akan-speaking peoples created terracotta heads such as this one. Called mma, among other names, these commemorative heads were associated with the funerary rites of royalty, as average men and women only had funerary vessels made upon their death. This head could possibly represent the deceased individual, but it could also be a member of the court created to accompany the deceased. Although it is debated if mma were used in the burial itself or in the funeral service, which often took place weeks after the burial, after their use mma were kept in a special area of the cemetery, known as "the place of the pots". Throughout the year people would bring food and drink to honor these spirits, as ancestors could intervene in times of difficulty to assist their family.

Physical Description
Ceramic head on a hollow cylinder with a fluted base. The figure's eyes and mouth are thin, while the nose is angular. The top of the head is covered in small protruding points.

Rights
If you are interested in using an image for a publication, please visit http://umma.umich.edu/request-image for more information and to fill out the online Image Rights and Reproductions Request Form. Keywords
burials
commemorative sculpture
funerals
funerary sculpture
royalty (nobility)
symbols of office or status