Shahnama, The Persian Book of Kings

Resource with 40 media
The Age of Creation

Resource with 1 media
The Age of Heroes

Resource with 19 media
The Historic Age

One of the world’s longest narrative poem, the Shahnama, or “Book of Kings,” provides a look into Persian culture both historical and legendary. In the tenth and eleventh centuries, during a period of Iranian history that was not a powerful or influential one, the Persian poet Ferdowsi began his quest to preserve his culture which had been threatened after the influence of the Turkish and Arabic peoples. It had been over 400 years since the fall of the Persian empire which resulted in the prominence of Islam over Zoroastrianism as well as the dominance of Arabic as the primary literary language. Ferdowsi wrote the Shahnama then to preserve the Persian language as well as restore a sense of prestige for Persia. Over time, the Shahnama was recognized for its importance and has subsequently survived to the present day, having influenced numerous other cultures with its powerful thematic elements and engrossing narratives.

The Shahnama has remained a monumental work for Iranians as well as many other cultures because of its inclusion of timeless stories. Within the epic are stories that explore the struggles and folly of man that result from power and greed. These struggles continue to have relevance; man against evil, himself, the supernatural, his own family, even fate. Ferdowsi’s writing was so powerful that he could find meaning with readers from the medieval period and readers in the present day.

The structure of the book begins with the Persian version of the origin of the world. This portion of the book is referred to by historians as the Age of Creation, as it is filled with mythical characters such as Gaiumart, “the legendary first shah who taught humans, ‘the arts of life.’” The stories of early kings are filled with battles against demons, the introduction of social classes, and the creation of crafts of both peace and war. From there begins the Age of Heroes. This period is filled with legendary kings who explore the deeper meanings of life. The stories within the Age of Heroes have underlying themes of rivalry and warfare that seems to plague the various legendary families for hundreds of years. In addition to the other portions of the Shahnama, the actions, faults, and qualities of the various kings provide moral lessons to the readers of the poem of how to rule justly and live virtuously. After the fantastic stories of legendary kings and mythical heroes, Ferdowsi begins to recount stories from the Historical Age. These stories contain real historical figures such as Darius III, Alexander the Great, otherwise known as Iskandar, and Bahram Gur. This period is interesting due to the adaptation of historical events to fit inside a Persian narrative. For example, Alexander the Great, historically a figure from the ancient Greek kingdom of Macedon, is adopted into the lineage of Persian kings. These alterations to history could be as simple as lack of proper records or could be attributed to Ferdowsi’s ultimate goals in writing the Shahnama. The Historical age concludes with the fall of the Sasanian empire to the conquest of Islam, but Ferdowsi chose to tell the story from the perspective of the Persians, one that could have easily been forgotten. 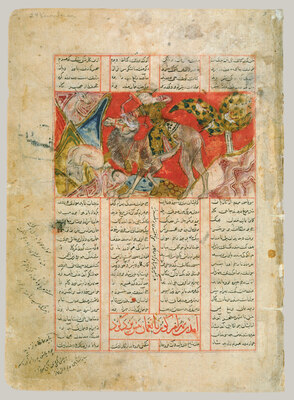 After Ferdowsi wrote the Shahnama, the earliest surviving copies of the poem were found over 200 years later. These copies are devoid of illuminations, or illustrations of the text that feature miniature paintings. Over time, there was a resurgence of interest in the text. This interest stems from the conquests that begin with the Mongols and the infamous, Genghis Khan. In the thirteenth and fourteenth century, there were numerous changes in power for the Persians. Each dynasty that ruled in the region had no ancestral ties to Persia and this was an obstacle for them. One method to alleviate the fact that many of these rulers had Turkish roots (many of the antagonists in the Shahnama were, in fact, Persian) was to commission copies of the Shahnama to show their appreciation of Persian culture. It was also during this period in which the different rulers, whether they were Mongols or Timurids, would include their own stories in the historical age of the Shahnama, creating a sense of legitimacy in their rule. In tandem with the increased patronage surrounding the Shahnama, there was also the introduction of book painting in the region. The creation of manuscripts was already an incredibly difficult and timely process as every part of the book was handmade--from the paper to the binding. Additionally, Islamic art manuscripts feature calligraphy of various languages based on region, which is another extremely arduous process that would take a single scribe their entire life to master. The process of creating miniature paintings surrounds a workshop of artists of varying talents where every aspect is done by hand, even the creation of pigments.  In early illuminated manuscripts, the paintings were often small and subordinate to the text. (MET Bahrum Gur Hunting with Azada folio). Over time, tastes changed and book painting was developed. This development led to more elaborate and large-scale miniature paintings that dominate the folios. This can be seen in Ann Arbor’s copy of the Shahnama. 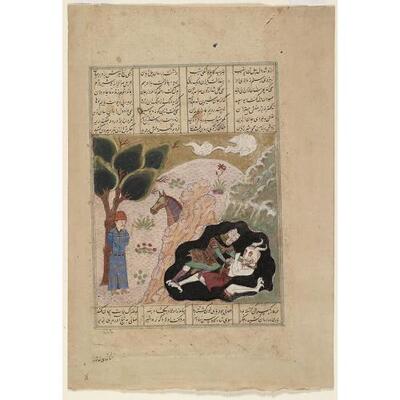 The copy held in UMMA’s collection has been dubbed the Kervorkian Shahnama, named after the previous collector who owned it. Through the research provided from Dr. Priscilla Soucek, she argues that the manuscript was created in the 1460’s in Baghdad for a Turkish prince, Pir Budaq. Her analysis of the work has been created by comparing different manuscripts contemporary to the Kervorkian copy from different regions. She attributes the manuscript to the fifteenth century due to both the number of illustrations as well as the size in proportion to the text. Illustrations became fewer in number throughout the whole manuscript, but larger in relation to the text, as well as more narrow—dominating the folio. In her research Soucek localizes the manuscript to the workshops of Shiraz in Iran during the fifteenth century as illustrations became more standardized across workshops in both style and subject matter, allowing for a close comparison of these visual aspects to other manuscripts from the region (See Images). While she argues that the manuscript was produced in Iran, the eclectic nature of the illustrations results in a blending of techniques and visual imagery from both Shiraz as well as Timurid styles. Soucek hypothesizes that the patron’s movements between Baghdad and Shiraz could have resulted in the mixture of styles as well as Persian manuscript production’s complicated visual tradition that was often influenced and changed by artists from different regions.

Cast of characters relevant to our manuscript:

1. From the Age of Creation

2. From the Age of Heroes

3. From the Historical Age

Iranian
Book Cover, made for the 15th-century manuscript of the Shahnama of Firdausi (The "Kervorkian Shahnama")
papier mâché, paint and lacquer with leather spine
10 1/2 in. x 6 7/8 in. ( 26.7 cm x 17.5 cm )
Museum Purchase
View Object Record
Zoom

Iranian
Iraj Is Slain by His Brothers, from the Shahnama of Firdausi (The “Kervorkian Shahnama”)
ink, opaque watercolor, and gold leaf on paper
10 1/2 in. x 7 in. ( 26.7 cm x 17.8 cm )
Museum Purchase
View Object Record
Zoom

Arts from Persia and Iran

Introducing the Epic of the Persian Kings

Halley Marie Burnside
Other Resources by this Author